Hensley leads opening round at Erie 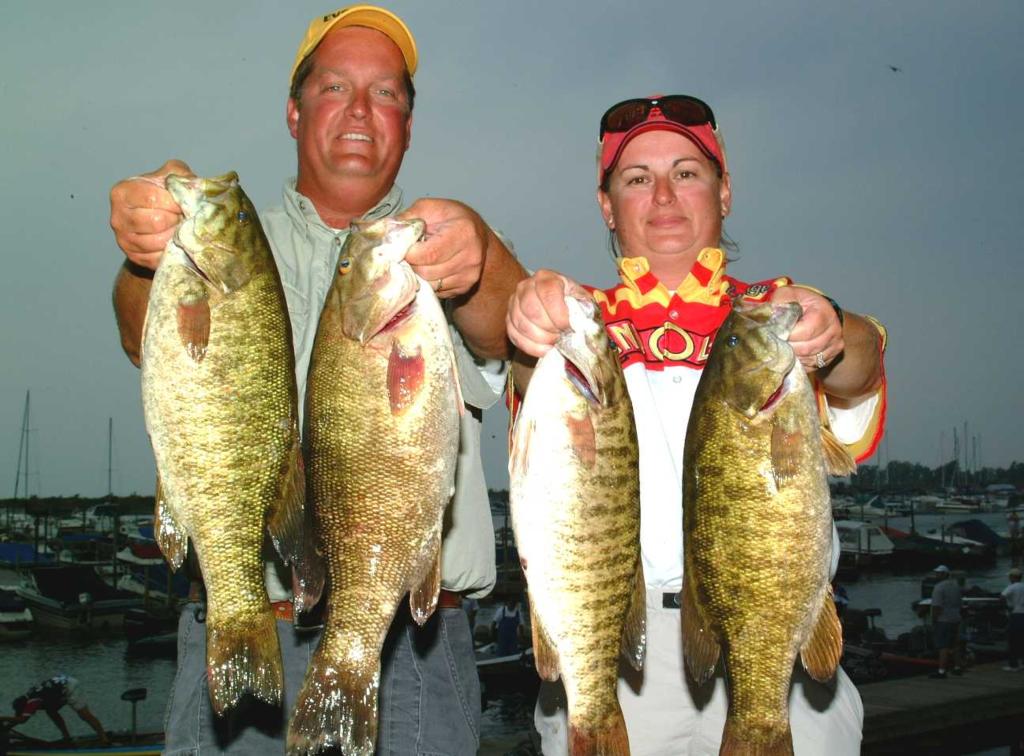 HAMBURG, N.Y. – Brian Hensley changed fishing locations Thursday but didn’t change his catch production. With his second five-bass limit in the 20-pound range in two days, the pro from Edwardsburg, Mich., moved up from the sixth spot into first place after the opening round of EverStart Series Northern Division competition at Lake Erie.

Day one was a blockbuster for anglers fishing smallmouth bass here at Erie, but catch weights dropped significantly on day two. Hensley, however, was one of just a handful of pros who actually increased their weights today. After catching 19 pounds Wednesday, he caught another limit that weighed 21-6 Thursday – the heaviest sack of the opening round – and led with a two-day total of 40-6.

Hensley’s day didn’t start out as anticipated. He returned to the area where he worked his drop shot to success on day one, but found the bite less than aggressive.

“The fish moved around a little bit today,” he said. “I think the wind was a factor. Pretty much every wave was coming over the boat.”

The southwest wind did pick up on day two. With 4- and 5-foot swells, a number of anglers came in saying they spent a good amount of time heaving over the side of the boat from seasickness.

Frustrated more than sick, Hensley went looking for a new spot, ditched the drop-shot and hooked into his leading stringer of fish.

“I only had about three fish at 10 o’clock. So I moved a couple of miles, started to drift and then caught a 5-(pounder), 3- and a 4,” he said. “I just used my Garmin to find an area that basically looked like an area that would hold some good fish.”

Like many pros, Hensley stayed deep, fishing at an average of about 40 feet. He caught one of his fish on a jigging spoon and the rest on the favorite smallmouth bait here, a green tube.

Friday, the leader hopes that his pattern holds up, but he’s worried about the wind. Still, he’s feeling confident that he can keep aiming for 20-pound sacks.

“I prefer it to be calm the next two days,” he said. “But with what I learned today, I think so.”

Day-one pro leader Mike Desforges of Burlington, Ontario, caught 3 pounds fewer than he did Wednesday, but he held onto the second spot with a two-day weight of 29 pounds, 6 ounces.

“I’m just catching them the same way as everyone else: deep on tubes,” he said. “I kind of had a tougher day today. I went to my spot where I caught 21 (pounds on day one) and they were all gone.”

Thomas Lavictoire of West Rutland, Vt., caught the second-heaviest limit Thursday – 20 pounds, 14 ounce – and ended up in third place with an opening-round total of 36-4.

“I didn’t get bit more than once probably every half hour or 45 minutes,” said Lavictoire, who added that he caught his smallmouth on a “different-colored” tube. “I’m not concerned with catching big numbers, though, as long as they’re quality fish.”

Michael Trickler of Waterloo, N.Y., caught the big-bass winner on the pro side Thursday – a nice 5-pound, 15-ounce smallmouth – and took fourth with an opening-round total of 36-4.

“I caught that 6-pounder today on my last drift,” he said.

“It was hard to fish vertically because the wind was so bad. Plus, all the fish that I was catching deep were dying. So I found some quality fish that were pretty shallow,” said Dobransky, who won the Northern Division standings in the circuit’s inaugural year, 2001.

All 10 of the top pros caught limits both days of the opening round.

Karl Tripple of Ilion, N.Y., led the Co-angler Division with an opening-round total of 32 pounds, 14 ounces after catching a hefty limit weighing 18-8 Thursday.

“What’s working for me is that I had the two greatest partners I’ve ever drawn this week,” said Tripple, who fished with pros Dave Linton on day one and Thomas Moleski on day two. “Today I caught the best bag of smallmouth that I’ve ever weighed in.”

Dragging a tube in water 15 to 30 feet deep, Tripple caught his limit Thursday by 10 o’clock and eventually culled about five fish out of his limit.

“Ah, what a day of fishing!” he said. “You couldn’t have wiped the smile off my face with a shovel.”

Second place on the co-angler side went to day-one leader Jeff Harris of Grand Blanc, Mich., for an opening-round total of 31 pounds, 2 ounces.

Mark McNeil of Ledyard, Conn., a two-time winner in the Northern Division, placed fourth with weight of 30 pounds, 3 ounces.

Day three of Northern Division competition at Lake Erie begins as the semifinal-round field of 20 boats takes off from NFTA Boat Harbor in Buffalo, N.Y., at 7 a.m. Eastern time. Anglers’ weights are reset to zero for Friday, and both fields will be cut to the top 10 anglers apiece for Saturday’s finals based on tomorrow’s weight.