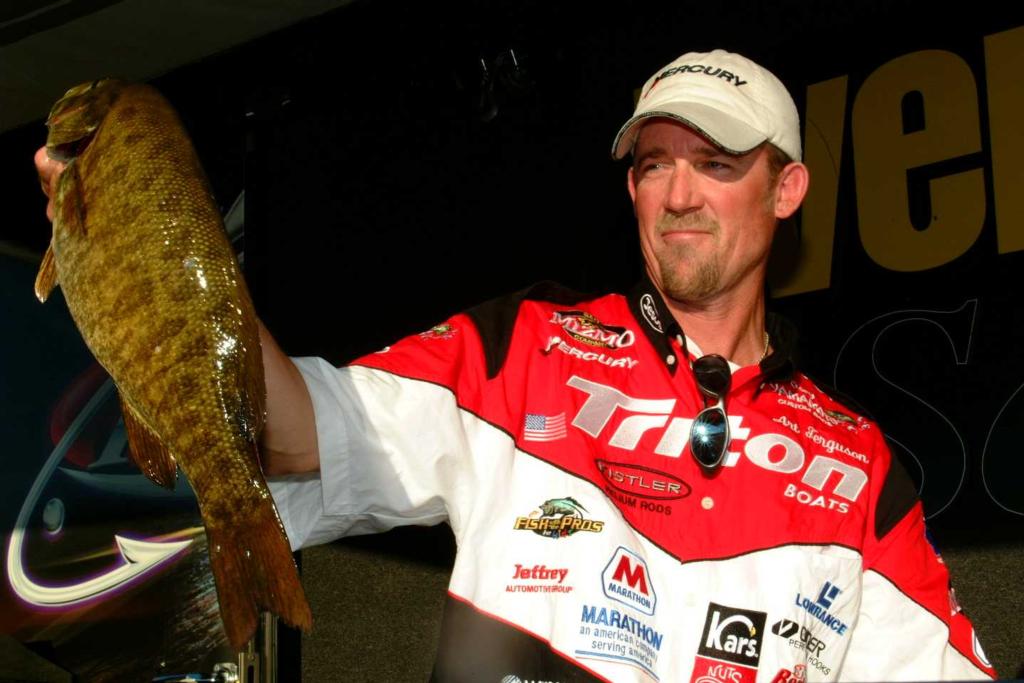 PLATTSBURGH, N.Y. – Art Ferguson had a lot on his mind as he took off for the second half of opening-round competition at Lake Champlain Thursday morning, but that didn’t stop him from catching another solid limit of bass for the second day in a row. The pro from St. Clair Shores, Mich., took over the pro lead in EverStart Series Northern Division competition with a two-day catch of 10 bass weighing 36 pounds, 3 ounces.

Thursday was a kind of gut check for Ferguson. On day one he amassed a stringer weighing 18 pounds, 8 ounces, but said he didn’t feel confident about the fishing since he caught mostly scattered bass. When day two began, he started thinking about everything he had on the line in just one uncertain day of fishing.

“There were three things I was thinking about,” he said. “I might have a chance for Angler of the Year (in the Northern Division). I needed a good day in order to qualify for next year’s FLW Tour. And I’ll be turning 40 after this tournament. So that all meant a lot to me today.”

As it happened, Ferguson’s battle with competitive angler angst started to weigh on him as he failed to catch the fish he wanted early in the day. By midday he had just four bass in the livewell – and two of them were dinks. He began to stress.

But instead of imploding, Ferguson went to a hole where he knew there was fish, but not very big ones. There, he caught his fifth bass, a 12 1/2-incher, and began to unwind.

“With all that stuff going on, I went to school where I’ve never caught a fish over 2 pounds,” he said. “All it really did was help me relax.”

After that, he methodically moved around the midlake area until he came upon what he was looking for: a school of big smallmouth.

“I had found them before the tournament, but then they had moved,” Ferguson said at weigh-in. “I caught five or six of them in a half-hour. I didn’t know they were that big. I’m shaking right now.”

The five bass he brought in Thursday weighed 17 pounds, 11 ounces and pushed him from eighth place into first. For an obviously relieved Ferguson, it seemed as if he had discovered gold in Lake Champlain Thursday. But in reality, perhaps all he found was the magic technique, though he would never tell.

“Let’s put it this way: I’m not fishing the way that I’m comfortable fishing,” he said. “People will know what that means.”

Workman puts in overtime for second

Craig Workman of Fort Worth, Texas, claimed the second spot in the Pro Division with a 10-bass catch weighing 35 pounds, 12 ounces in the opening round. After posting 18-11 on day one, the 17-1 he brought in on day two was a yeoman-like effort, considering his boat motor broke down twice.

After reaching his fishing spot – which he said has been heavily pressured during this week’s tournament – behind a number of other boats this morning, his motor quit.

“I just took off the cowling, played with some wires and got it going again,” Workman said.

Later, his motor quit again and he caught a ride back to weigh-in. But somewhere in there he was able to fish his spot with a jig and land another solid limit, a mixed bag of largemouth and smallmouth.

“I just went ahead and fished,” he said. “There are still so many fish in there, and tomorrow there won’t be as many boats on the water.”

Day-one pro leader Mike Oberski of Ypsilanti, Mich., caught another good limit and stayed high on the leaderboard in third place with a two-day total of 35 pounds, 9 ounces.

“I’m doing a lot of running around,” he said. “I picked up my fifth fish off an area that I haven’t even fished yet. I was just ecstatic to have gotten five of them because that’s all I got.”

Pro Clark Wendlandt of Cedar Park, Texas, one of Lake Champlain’s biggest fans, was admittedly disappointed when he failed to make the cut in FLW competition here last June. He made up for it this week, however, by placing fourth in the opening round with a two-day weight of 35 pounds, 4 ounces.

“When I finished 30th (in June), I felt like I had plenty of fish to win that one,” said Wendlandt, who added that he is fishing just two grassy areas this week. “Let’s just say I feel like I have a chance in this one.”

Pro David Wolak of Warrior Run, Pa., made the cut in fifth place with a two-day weight of 34 pounds, 14 ounces.

All 10 of the top pros caught limits both days of the opening round.

– The pros weighed in 152 limits Thursday, down just five from a record-setting Wednesday.

– The pros weighed in a total of 2,101 pounds, 7 ounces of bass Thursday, second only to Wednesday’s record mark.

– Despite Ferguson’s first-place performance Thursday, Charlie Hartley of Grove City, Ohio, has unofficially won the 2004 Northern Division standings title. The next two days, Ferguson can conceivably make up no more than 19 points on Hartley, who also made the cut, but he trails Hartley by 34 points. Wesley Strader of Spring City, Tenn., who looked strong on day one, fell out of the race for the points title with a 55th-place finish Thursday.

Kenneth Witter of Pine Valley, N.Y., led the Co-angler Division with an opening-round weight of 33 pounds even. He also won the $250 co-angler big-bass award for a 5-pound, 12-ounce largemouth.

“I got lucky I guess,” said Witter, and EverStart rookie. “There weren’t a lot of bites; I was just lucky to get the bigger bites.”

Day-one leader Larry Butler of New Haven, Vt., placed second for the co-anglers with a two-day weight of 32 pounds, 14 ounces.

All 10 of the top co-anglers also caught limits both days of the opening round. Thursday, the co-angler field collectively caught 80 limits.

Day three of Northern Division competition at Lake Champlain begins as the semifinal-round field of 20 boats takes off from Mooney Bay Marina in Plattsburgh, located at 15 Mooney Bay, at 7 a.m. Eastern time. Anglers’ weights are reset to zero for Friday, and both fields will be cut to the top 10 anglers apiece for Saturday’s finals based on tomorrow’s weight.