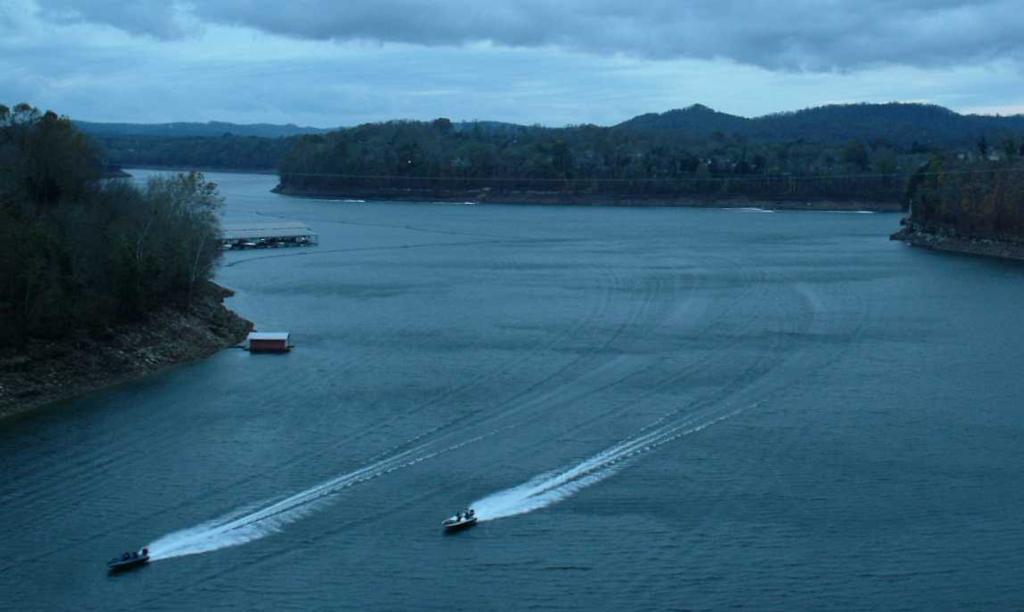 The last of the storm clouds began to clear out as boats raced to their fishing locations at the EverStart Championship on Lake Cumberland this morning. Photo by Rob Newell.
November 4, 2004 • Rob Newell • Archives

After Wednesday’s competition, many anglers left the weigh-in scratching their heads and wondering what exactly is happening on Lake Cumberland.

Two Kentucky anglers, H.C. Sumpter of Nancy and Ramie Colson of Cadiz, appear to have broken the code to tapping the multiple-species vault on Cumberland. Sumpter, the leader, anchored his 13-pound, 8-ounce limit with two quality smallmouths while Colson, in second, had all three bass species in his five-bass limit.

Both anglers were guarded about the specifics of their patterns, but they both admitted to running a lot of water and fishing slow once they got to a spot.

Other than that, baits and techniques that produced fish for pros on Wednesday ranged from top-waters and spinnerbaits to drop-shots and spoons. Fish seem to be scattered from top to bottom and everywhere in between, making Lake Cumberland a hard place to get a handle on right now.

Sumpter believes that fishing will be tougher today, while others think the passing cold front will help spur the shad and bass into more predictable patterns over the next few days. But for many, it will be too late as the top-10 cut will be made this afternoon and 140 pros and 140 co-anglers will be eliminated from competition.

The exact weight it will take to make that top-10 cut has also been hard to gauge this week. With the cut on the pro side currently standing at 8 pounds, 5 ounces, the cut might be as low as 12 pounds if the bite gets worse or as high as 15 pounds if there is a sudden spike in bass activity.

The weigh-in resumes today at 3 p.m. at General Burnside Park on Lake Cumberland.