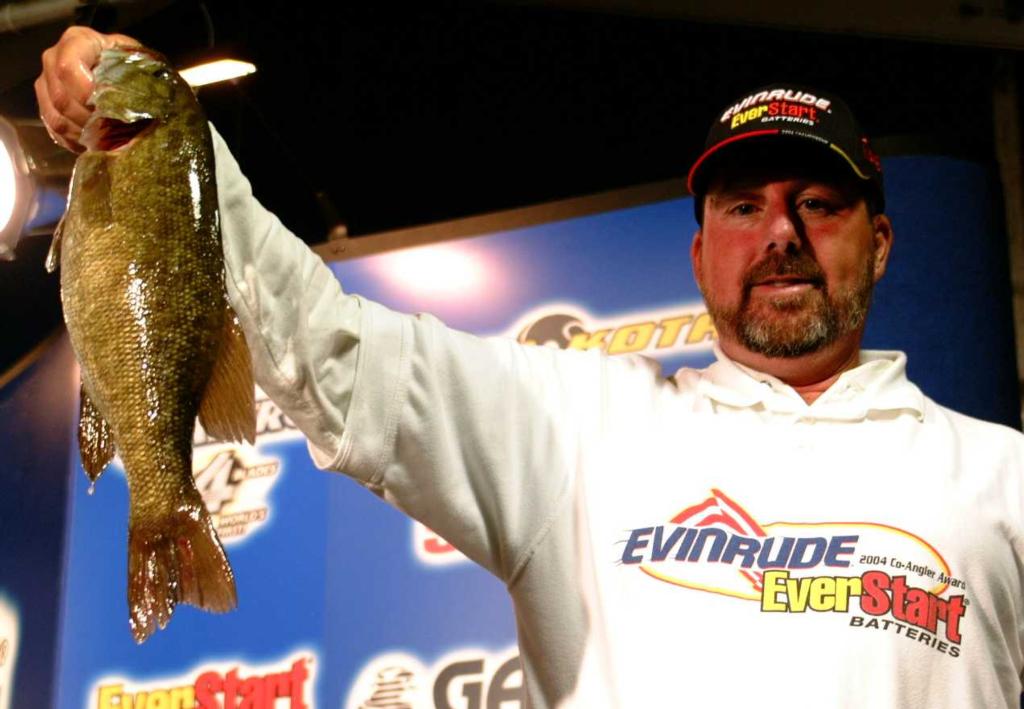 Got all that? … Congrats to co-angler Gary Collins, who not only made the cut Thursday, but won the 2004 EverStart Batteries and Evinrude Outboard Engines Co-angler Award. The award goes to the co-angler who “amasses the most points over the season by wearing an EverStart/Evinrude shirt and cap on stage.” While a bit confusing, the bottom line is that Collins – with one win, one top-10 and two top-20s in the Western Division, plus two tournaments in the Northern – scored the highest of all co-anglers who wore the sponsor gear in the later rounds. Since most co-angler finalists do wear the shirts on the EverStart Series, it basically means that Collins was the Co-angler of the Year for the entire circuit. But he had to earn it this week, since several co-anglers were tied for the award coming into the event. He clinched it by making the cut Thursday and won a new Ranger and Evinrude 225. Oh, and let’s not forget that Collins is also the 2004 Western Division standings winner. Whew.

Circuit work … Dion Hibdon‘s an FLW standout, sure, (he won the 2000 FLW Championship, among other numerous top-10s) but his foray into the EverStart Series is paying off, as well. By making the cut this week, he will have made three top-10 finishes in just two years. His first two came in the Northern Division last year.

Really stupid fish … David Lauer wanted to get away from the fishing crowd this week, so he ran as far as he could downriver – about 50 miles – to find fish in practice. Perhaps he didn’t run far enough. One of the first bass he caught and released had a sore mouth and some line on his tail. “He had already been caught twice,” he said. Today, Lauer returned to the spot, caught just one keeper and – surprise – it was the same fish with the same beat-up mouth and line dangling. Unfortunately, the repeat offender didn’t help Lauer earn a check.

“I think I figured something out today.”

– Pro Pete Gluszek, defying conventional wisdom after catching just two squeakers worth a total of 2 pounds, 11 ounces Thursday. Still, buoyed by a solid performance Wednesday, he made the cut in sixth place.

– Co-angler Sam Sharp, who fished behind pro leader H.C. Sumpter and found his options to be, uh, limited Thursday.