Sumpter stays on top at Cumberland 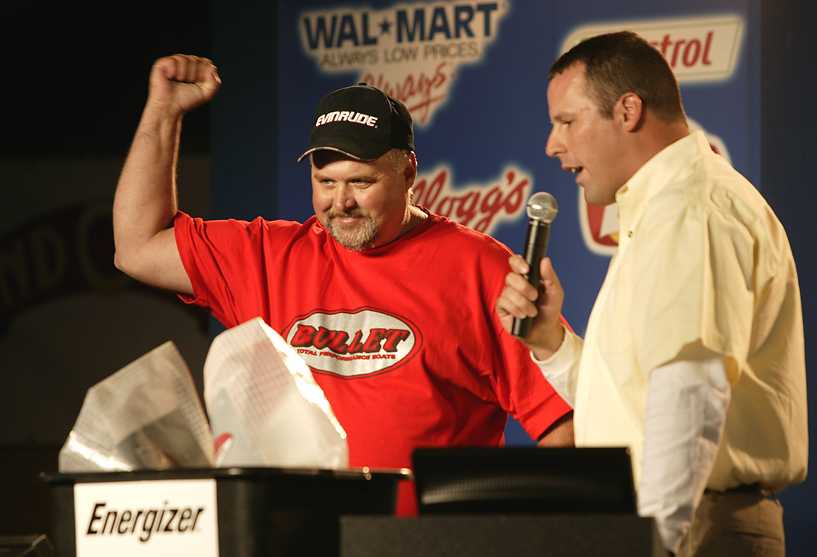 SOMERSET, Ky. – Six of Wednesday’s leaders in the EverStart Series Championship on Lake Cumberland dug in and held their ground today to hold their spot in the coveted top 10.

One of those anglers was yesterday’s leader H.C. Sumpter of Nancy, Ky., who caught five bass weighing 7 pounds, 5 ounces today to hold his lead with a two-day total of 20 pounds, 13 ounces.

Sumpter, the hometown favorite, verified that he did lay up a bit today by not fishing for the big smallmouth he feels it will take to win the event.

“I purposely didn’t go to the smallmouth water today, but a lot of it had to do with the wind,” he said. “That wind hurts the way I’m fishing for the smallmouth and it blew pretty good. I had a limit by ten-thirty this morning so I just went looking for some new areas.”

Sumpter said he did a lot of running and gunning yesterday, but today he stayed in a few areas and grinded out a total of 8 keepers.

In terms of his chances of winning the event over the next two days, Sumpter indicated that the wind would play a crucial role in his odds.

“I can catch Kentuckies (spotted bass) in the wind, but I really need for it to be calmer to catch a couple of those good smallmouth each day,” he said. “The way I’m fishing for those smallmouth, I can’t get my bait down where it needs to be if the wind is blowing.” 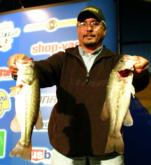 “I feel comfortable with what I’ve got going,” he said. “I fished the same two places I fished yesterday to catch my 9 pounds today. I still have four or five other places I haven’t fished yet. I’ve been fortunate in that I’ve been catching my fish early and that has allowed me to settle down and not have to run around to my other places.”

Pickett thinks sunshine would help him.

“Every time the sun would break through the clouds today, I’d catch one,” he said. “And I’m catching a mixture of spots, largemouth and smallmouth. I haven’t caught a keeper smallmouth yet, but I’ve been close.”

“I didn’t run around near as much today,” Colson said. “I pulled into one place where I just wanted to catch a limit of spots. I caught two spots and then a keeper smallmouth and decided that was enough to get in the top 10.”

The area Colson is fishing contains a generous mix of the three bass species. He weighed in one of each species yesterday and said he caught a couple of 17-inch smallmouth today.

“It’s not like I’m targeting one species over another,” he said. “I’m fishing real deep and real slow; when I get a bite, I have no idea what it’s going to be.” 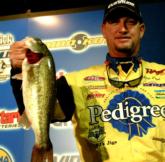 His two-day total of 18 pounds, 3 ounces moved him to fourth.

Pugh says he has felt comfortable with Lake Cumberland all week because it is very similar to one of his home lakes: Smith Lake in Alabama.

He is making a one-hour run south to the back of a creek where he is cranking channel bends in 10 to 11 feet of water.

“I’ve been getting my limit off one channel bend that is loaded with spotted bass” he said. “Then, I run to a laydown that has big largemouth all in it – I can see them, almost like bedding bass. They just hang out in the tree and when I get too close, they cruise out of sight and come back a few minutes later. I caught a 4-pounder out of that tree today. If I can get those others to bite in the next two days, I might get well in a hurry.”

Scott Emery of Livonia, Mich., has weighed in two limits totaling 15 pounds, 6 ounces over the last two days to move into fifth place.

Emery is fishing Carolina rigs along creek channels and has to wade through many small fish to get his keepers.

Pete Gluszek of Franklinville, N.J., added a few pounds to his big catch yesterday to grab sixth place with a two-day total of 14 pounds, 14 ounces.

Warren Wyman of Calera, Ala., has brought in two consistent limits the last two days for a total of 14 pounds, 10 ounces, which puts him in seventh place.

Wyman is fishing an area that is loaded with bait and bass.

“I’m fishing one area – a creek channel,” Wyman said. “I’m not really fishing any kind of structure, I’m just fishing over a lot of bait. The bait is so thick in there it blacks out the depth finder.”

Wyman has been catching 8 or 9 keepers a day, but he feels it’s going to take a good largemouth or smallmouth each day of the finals to win. 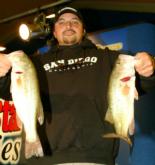 Steve Amata of Payson, Utah, caught the only limit in the co-angler division today. His 8-pound, 8-ounce limit pushed his two-day total to 10 pounds, 5 ounces and put him in the lead.

“I’m a long way from home,” Amata said. “But this is a deep, clear lake and it’s like some of our waters back home, so I’ve been using stuff that works back there.”

Kirk Beardsley of Huntington Beach, Calif., has purposely targeted smallmouth with a spider jig the last two days and his ploy has worked. He bagged keeper smallmouth yesterday to anchor his catch and added another keeper smallmouth to his creel today.

Beardsley now has a two-day total of 10 pounds, 1 ounce for second place.

“As a co-angler, if you can catch just one of those big smallmouth each day, it goes a long way,” he said.

Earl Dalton of Jackson, Calif., yesterday’s co-angler leader, is in third place with a two-day total of 9 pounds, 13 ounces.

Gary Collins of Moorpark, Calif., is in fourth place with a two-day total of 9 pounds, 11 ounces.

David Lawson of Richmond, Ky., bagged the big bass of the day in the co-angler division, a 4-pound, 15 ounce smallmouth which helped propel him into fifth place over all with a two-day total of 8 pounds, 2 ounces.

Day three competition for the top 10 pros and co-anglers begins at 8 a.m. at General Burnside Park.