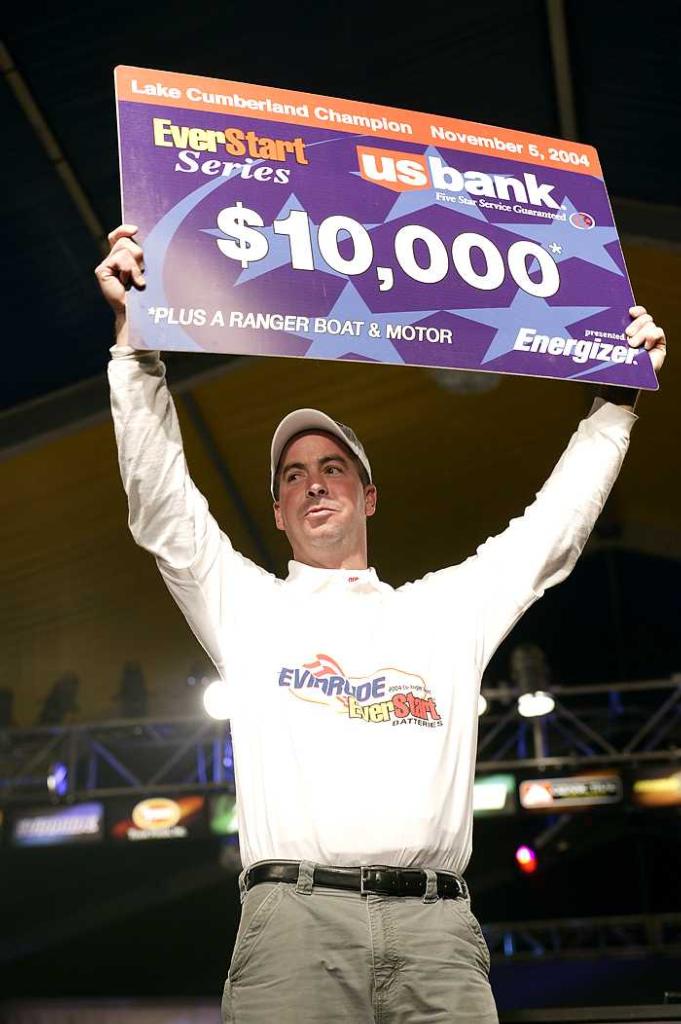 SOMERSET, Ky. – Ron Mueller of Prosperity, S.C., won the co-angler division of the EverStart Series Championship with four bass weighing 5 pounds, 1 ounce thanks to a tip from his friend, pro Anthony Gagliardi, also of Prosperity, S.C.

“I practiced with Anthony, and he showed me how to fish a weightless Zoom Fluke Jr.,” Mueller said. “And that’s what I caught all my fish on today.”

Mueller fished the smaller version of the Super Fluke on a spinning rod with 6-pound-test line.

“I threaded the bait on a tiny hook so the hook was exposed,” he said. “I would cast it out there and work it just under the surface. When the fish would come up to bite it, they were hooked as soon as they ate it.”

Mueller, who earned his way to the EverStart Series Championship through the Eastern Division, won a Ranger 519VS and $10,000 cash.

“This is a very special day,” he said, still shaking with excitement. “This is the biggest thing I’ve ever won. But what made it so special was that my wife and 16-month-old son, Blake, were here to see it. Once I made the top 10, they drove all night to get here.”

Mueller said he would be back as a co-angler next year and had no plans of turning pro anytime soon.

“I have to thank Anthony for this win,” he said. “This was my first year fishing EverStarts, and he really helped me out by letting me practice with him. He showed me things this year that would have taken me a long time to learn on my own – he’s a great guy.”

Dalton caught his fish this week on drop-shot Pro Worm on 6-pound-test line.

“The Pro Worm is a 4-inch leech-bodied bait,” he said. “The color was Delta red”

He caught his fish on a watermelon colored Zoom Trick Worm rigged on a 1/4-ounce Spot Remover with 12-pound-test line.