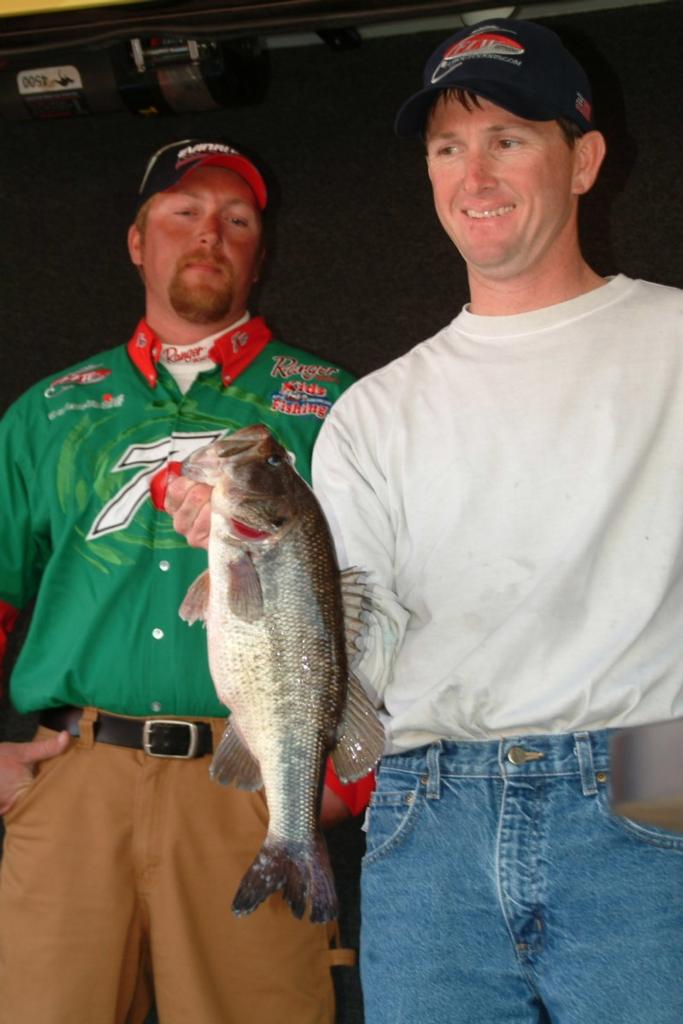 MANNING, S.C. – To say that Allan Glasgow had J.T. Kenney’s number all week would probably be the understatement of the season. During Wednesday’s competition on Santee Cooper, Glasgow set the all-time, single-day catch record in EverStart Series history with a behemoth five-fish stringer weighing 32 pounds, 13 ounces. As it turned out, Glasgow’s sack was 1 ounce larger than the previous record-setting stringer, weighed in by Kenney two months earlier at the EverStart Southeast Division event on Lake Okeechobee.

However, as fate would have it, that wouldn’t be the last time Glasgow would leave Kenney scratching his head in disbelief during this Southeast Division event. A mere three days later, during Saturday’s final weigh-in, Kenney would lose out to Glasgow once again – only this time, the stakes were much higher.

Heading into the finals in fifth place, Kenney stormed back into the lead after changing gears on the last day – switching from a finesse fishing style to a flipping stick in an effort to “go for broke.” And, until the final minutes of weigh-in, it appeared that his strategy was going to pay off. 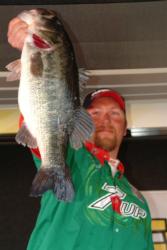 “I had been fishing these weenie worms the past couple of days instead of flipping, the way I really like to fish,” Kenney said. “But my girlfriend came down and told me that she would be proud of me no matter where I finished, whether it was first or 10th. So, I decided to go for it. I picked up my flipping stick and decided to try to win this tournament.”

Kenney, one of the best flippers in the nation, parlayed his new approach into the largest stringer recorded during Saturday’s finals – a 14-pound, 3-ounce bag – which gave him a healthy two-day total of 25 pounds, 6 ounces.

But then it was Glasgow’s turn to take the stage. Without any hint of what was to follow, the 34-year-old EverStart rookie from Ashville, Ala., produced a five-fish stringer weighing 11 pounds, 15 ounces – giving him the exact same two-day weight as Kenney. But due to the official tournament rules, which award tiebreakers to the angler who compiles the largest combined weight over the opening two days of competition, Glasgow was declared champion. 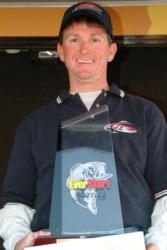 “This is awesome. It’s the biggest win of my career. It’s a great feeling,” said Glasgow, who led all qualifiers heading into the final two days of competition with a mammoth two-day catch of 44 pounds, 15 ounces. “But my hat’s off to J.T. He’s a great fisherman. I’m just lucky he wasn’t able to use his big flipping stick the other three days of this tournament or I could’ve been in real trouble.”

For his first-place finish, Glasgow received $10,000 as well as a fully rigged Ranger boat, for a total value of cash and prizes of $51,000.

“I still can’t believe it,” said Glasgow. “Man, this is awesome. I kept thinking about that fish I missed yesterday, but I realized I had to put it out of my mind. Then, when I saw the size of J.T.’s bag today, I was really nervous. I was just very fortunate today.”

Glasgow said he landed the majority of his catch in a two-acre area, targeting matted grass with a Denny Brauer flipping tube and Gary Yamamoto craw worm.

In the end, Glasgow said he couldn’t have written a better script for this week’s tournament.

“There are some guys fishing this tournament that do this 365 days a year,” said Glasgow, fishing in only the second EverStart event of his entire career. “There’s definitely some tough competition here. And J.T. is one of the best. For me, just finishing in the top 10 would have been an accomplishment.”

After finishing the Lake Okeechobee EverStart event this past January in second place by a mere 1 pound, 10 ounces behind the winner, Kenney, not surprisingly, had a harder time stomaching his second consecutive runner-up finish in as many Southeast Division tournaments.

“Of course it’s heartbreaking,” said Kenney, who only managed to catch four fish in the finals. “I had the fifth fish on, but it just got off. It’s definitely tough. It’s my second second-place finish in a row. I lost by a little over a pound last time and by 0 ounces this time. So, it’s kind of hard to swallow right now.” 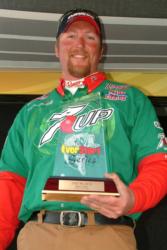 “You know, overall it was a good week,” Kenney finally admitted. “Right now, I’m headed to Ouachita (the third FLW Tour event of the 2005 season). And hopefully I can do well there, too.”

Ironically, Kenney had planned to head to the Ouachita River tournament earlier this week in order to get in some valuable practice days. However, his stellar performance on Santee Cooper kept him around a lot longer than he initially expected.

“Now, I’ll only have one day to practice,” he said. “Hopefully, this will be worth it.”

Despite the tough loss, Kenney still managed to walk away from the Santee Cooper event with a nice consolation prize of $10,000. 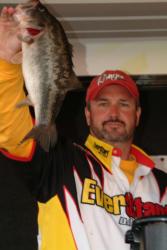 Bolstered by a two-day catch of 21 pounds, 7 ounces, Alex Ormand of Bessemer City, N.C., captured third place overall, winning a check for $8,950 in the process.

“I’ll tell you what,” said Ormand, “coming into this tournament, I wouldn’t have given one plug nickel (on the odds) that I had any chance of winning this at all. I had a big fish on today – a real toad – but I didn’t land it. I guess it wasn’t meant to be. But overall, I had a good time.” 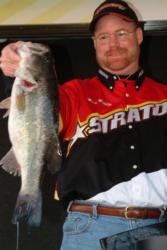 After leading the Santee Cooper event after the third day of competition, Mark Mauldin knew that it was his tournament to lose heading into the finals. Unfortunately for Mauldin, a native of Cleveland, Tenn., he just couldn’t get the big bites when it counted most.

“I knew I needed three big bites today,” said Mauldin. “I could have run around and thrown a little worm around the boat docks and got a small limit, but those big fish kept calling my name today. In the end, I just could never get those big bites. But this is a fantastic lake. And I had an awesome tournament.”

For his efforts, Mauldin took home $7,950 in prize money.

Warren Wyman of Calera, Ala., used a total two-day catch of 16 pounds, 6 ounces to capture fifth place overall and win $7,450 in prize money.

Rounding out the top 10 pro finalists at the EverStart Santee event: