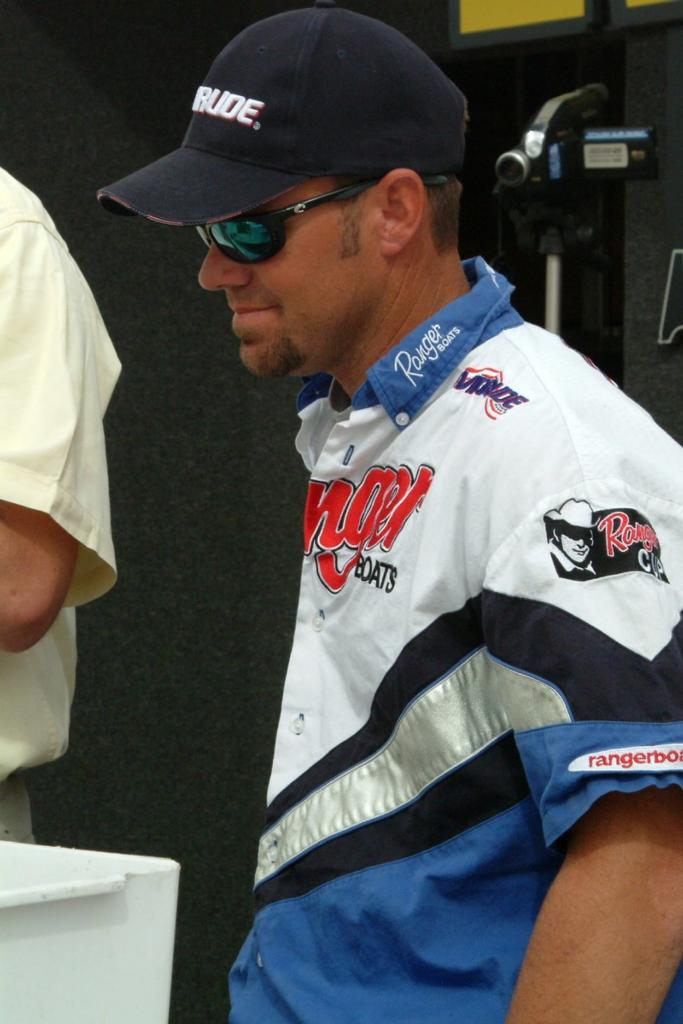 HENDERSON, Nev. – The weather man said the wind was going to blow today, and blow it did, with sustained winds of up to 30 mph and much heavier gusts blowing the caps off many an angler at the EverStart Series Western Division event on Lake Mead.

It’s hard to tell whether the wind was helpful or hurtful, judging by both the numbers as well as anglers’ opinions. For the most part, numbers were down today but only slightly, and competitors varied as to whether they liked the wind or they didn’t – or whether they even cared at all.

Not much changed at the top of the pro leaderboard, with five of yesterday’s top 10 anglers advancing to the 10-man final round that will take place over the next two days. Yesterday’s leader Tim Klinger of nearby Boulder City caught 14-8 yesterday and added another 13 pounds, 1 ounce today for a two-day catch of 27 pounds, 9 ounces that led the pro field by 4 pounds, 7 ounces. A commanding lead it is not, however, as weights are cleared for tomorrow’s competition, and all 10 anglers are once again on equal footing.

More of the same

To retain his lead, Klinger continued his day-one pattern of using reaction baits to find his keepers, only to catch them later on soft baits.

“I caught them the same way I did yesterday – exactly,” Klinger said. “Nothing really changed. I caught six today and quit fishing, in my area anyway.”

Klinger added that he will continue his sight-fishing pattern tomorrow and will not even need to change areas.

“I’m going to keep doing the same thing tomorrow, and I’m definitely not going to change areas,” he said, adding that a relocation might be in the cards later in the event. “I’ve got a couple of 5-pounders spotted, and no one caught them today, I don’t think.”

Klinger said he’s mainly fishing brown-colored baits, though he will occasionally switch to white or chartreuse. Klinger counts himself among the anglers who are not bothered by the heavy winds, which will in all likelihood return tomorrow.

“I already had my fish before it started blowing, but I think I could have caught them anyway,” he said.

In second is yesterday’s No. 8 pro, Shane Meisel of Alta Loma, Calif., with a two-day total of 23 pounds, 2 ounces. His day-one catch of 11 pounds, 11 ounces was nearly duplicated today, when he brought in 11-7. Unlike Klinger, Meisel had a rough time catching them by sight today, but he, for one, was looking forward to the gusty winds.

“The fishing was tough today,” he said. “All the sight-fish were gone. We had to go after a lot more reaction fish. We were waiting for the wind to come. Once the wind picked up, I knew I’d catch them.”

The rest of the leaderboard ought to keep an eye on Meisel, as he has only milked one of the fish-heavy spots he found in practice.

“I’ve been here for 12 days,” he said. “I haven’t even hit my good spots yet. I found a spot in the last day of practice, and that’s where I’ve caught all my fish.”

Dennis Kolender of Henderson slipped from second to third today, bringing in 10 pounds, 4 ounces that brought his two-day total to 23 pounds, 1 ounce. Kolender didn’t get a lot of bites today, but the ones he got were the right ones.

“I caught my limit by noon and only culled two fish,” he said. “I’m covering a lot of water and finding new water every day.”

Kolender said he had two patterns going – deep and shallow – and is fishing areas he knew from the past due to his limited practice time. However, he cannot be completely sure that his fish will still be there to carry him through the finals.

“The fish get depleted,” he said.

Bolivar, Le advance to final round

Ramona, Calif., pro Gabe Bolivar stayed in the No. 4 spot today with a two-day total catch weighing 22 pounds, 12 ounces. Behind him in fifth is Thanh Le of El Cajon, Calif., with 22 pounds, 3 ounces.

Rounding out the top 10 pros on Lake Mead:

Andrachick made the longest leap to the top 10 after finishing in 51st place after day one.

Leading is yesterday’s No. 3 co-angler, Gary Key of Phoenix, with a two-day total catch of 16 pounds, 11 ounces. He caught 9 pounds, 15 ounces yesterday and followed that up with another 6 pounds, 12 ounces to claim the co-angler lead.

Key has fished only two EverStart events in his career and has earned a top-10 finish in both of them. He entered the tournament ranked second in points and will no doubt leave it No. 1.

“I’m focusing on certain depths between 10 and 15 feet,” Key said. “The bites are few and far between, so when you get bit, you’ve got to get them in.”

Key, who is catching his bass on a creature bait/crawfish pattern, lost two fish this morning that could have darkened his morale.

“I thought that was going to hurt me,” he said. “I took a breather and regrouped.”

Key and his day-two partner made a lengthy run this afternoon and were greeted with large wind-driven waves on the way back in.

Yesterday’s No. 2 co-angler is again today’s No. 2, as Charlie Crawford of Peoria, Ariz., brought in another 5 pounds, 6 ounces today that gave him a two-day total catch of 15 pounds, 7 ounces.

“We had to move around a lot,” said Crawford, who was throwing a drop-shot. “My pro wasn’t really on today, so I just had to keep the line wet and keep casting. The bass are really aggressive.”

Crawford estimated he made three times the number of casts as his pro partner and attributed that to his success.

In third is Half Moon Bay, Calif., co-angler Gary Haraguchi with 14 pounds, 15 ounces over two days. Roseville, Calif., resident Lewis Milligan rose from 12th to fourth with a two-day catch of 14 pounds, 14 ounces. Behind them in fifth is another California angler, John Bitting of Westminster, with 14 pounds, 1 ounce.

The final-round anglers will take off Friday at 6:30 a.m. from Callville Bay, located at 100 Callville Bay Road in the Lake Mead National Recreation Area.