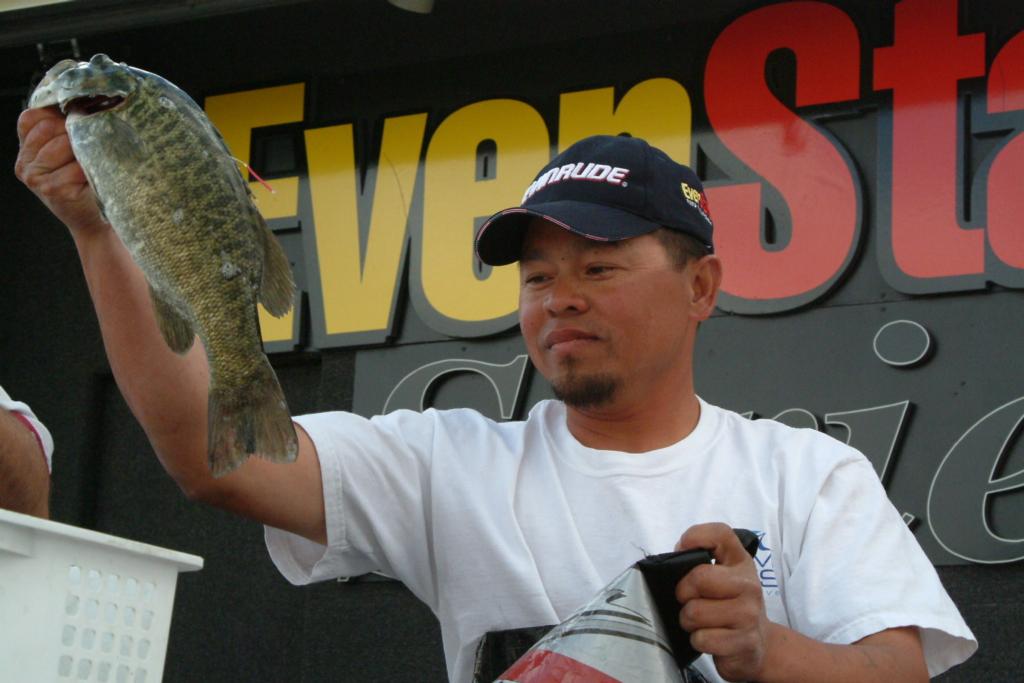 HENDERSON, Nev. – Thanh Le has a lot of people to thank for his first EverStart Series victory.

Over the course of three seasons in the EverStart Series, Le has had boat trouble – many, many times. This week was no exception, and luckily for Le, part of his prize package included an Evinrude-powered Ranger boat.

“My boat broke down this time after the second day,” he said. The list of people who have loaned him boats includes Jim Wickham, the 2003 co-angler points champion. Wickham won a fully rigged Ranger as the ’03 EverStart/Evinrude Co-angler Champion, and Le took that very boat out on the rough waters of Lake Mead this week to claim his second top-10 finish and his first win.

After the final weigh-in, Le had only one request: to give props to the long list of folks kind enough to let him borrow a rig during all the times his boat has failed him over the last couple of years. Including Wickham, those people are Dan Unten, Jeff Wilkie, Richard Davies, Steve Brecko and Justin Hanold.

As for Wickham, “I helped him win that boat,” Le said. “He won the ’03 Clear Lake tournament out of the back of my boat, so it’s payback.”

Le began the tournament Wednesday in the top 10 and never fell out of it, ending day one in sixth place and earning a trip to the final round by finishing fifth on day two.

He was fourth after day three with a 7-pound, 7-ounce catch that lagged behind leader Gabe Bolivar by a seemingly insurmountable 4 pounds, 9 ounces. But Bolivar brought in only 6 pounds, 11 ounces on the final day, while Le improved his catch by more than 4 pounds. Le’s final tally on day four was 11 pounds, 11 ounces, which earned him $8,400 plus the Ranger.

“I was basically targeting cuts in the back of bays and coves,” he said. “The first three days I fished the Echo area, which is about 30 or 40 miles (away).”

For the final day, Le moved to one of his favorite Lake Mead hot spots, the Finger Cove area located not far from the launch site at Callville Bay Marina.

“Today I went less than a minute, to the next cove,” he said. “Late yesterday around 2 p.m. I went there – it’s an area I fish every year this time of year.”

Le said he declined to fish the Finger Cove area the first two days due to excessive boat traffic, and he did not wet a line there yesterday either, merely checking the area out to gauge its quality for day four.

“Yesterday I kept looking at it, but I had fish,” he said. “After struggling today, I came back there. Yesterday I had spotted 30-something fish on the bank. Some were on beds, and some were cruising along the bank.”

Le entered the area this morning, hoping against hope that he’d have it to himself. Luckily for him, there was no one there except for two pleasure boats.

“I had the place to myself all day long,” he said.

Le reported that this week’s ever-changing weather conditions did not change the way he fished.

This week’s tournament has seen hot sun that later cooled off as much as 20 degrees over two days. The winds have also gone from calm to what felt close to gale-force, whipping around at upwards of 30 mph. Finally, the anglers also dealt with rain on the last day, although not for very long.

“It’s common knowledge that the fish get more active in the wind and clouds on this lake,” Le said. “They get more aggressive.”

For that reason, Le counted himself among the anglers who welcomed the wind. Some wanted it while others, like runner-up Klinger, wished it would go away.

Overall, Le prefished the area for nine and a half days, coupling that knowledge with a few things he learned in the past to catch his winning fish.

“Two years ago I fished a WON bass tournament here,” he said. “I fished with a local who came out with a tube in his hand. He put two (bass) in the boat and taught me a lesson.”

After leading the two-day opening round with a combined catch of 27 pounds, 9 ounces, local pro Tim Klinger slipped to second place on day three with a limit of bass that weighed 9 pounds, 10 ounces. Although he – along with everyone else – had a lot of ground to make up with Gabe Bolivar’s commanding 12-pound catch, Klinger was certainly never out of the hunt.

Klinger fished with eventual co-angler winner Lewis Milligan on day four and handed him the bait that earned him the title. With Klinger’s bait tied on, Milligan brought in four fish that gave him the co-angler win by 8 ounces.

All week, Klinger has utilized a reaction-bait pattern that located the fish, switching to a soft bait once the bass began following the reaction bait. This sight-fishing pattern blew away in the wind, although Klinger managed to adjust well enough to come within an ounce of victory.

“Today I switched up and left my primary area,” he said. “I caught seven or eight fish – missed a few, broke some off.”

Klinger caught his bass today on a 3/4-ounce brown/red Yamamoto jig mixed with purple and admitted that the gusty winds affected his performance.

“With the wind blowing, I couldn’t fish the way I did the first couple of days,” he said. Klinger’s performance this week on Lake Mead helped him secure a fourth-place ranking heading into the Western Division’s final event on the California Delta.

Add Dennis Kolender to the list of anglers earning their personal-best EverStart finish this week on Lake Mead. The Wal-Mart Bass Fishing League veteran took third place with a two-day total of 18 pounds, 11 ounces that earned him $8,000.

Kolender tied for second on day one and was third after day two with an accumulated weight of 23 pounds, 1 ounce. He remained in third on day three with 9 pounds, 2 ounces and held on to that position on the final day with another 9 pounds, 9 ounces.

Kolender had been fishing past the Virgin Basin earlier in the week, but moved today to Gregg’s Basin to catch his bass. Several anglers had trouble with losing fish this week, and today, Kolender was no exception.

“I broke off two fish, and that probably hurt me,” he said. “I had a shallow pattern, throwing a Fluke and a brown jig and drop-shotting a Tiki-Drop.”

Bolivar moves down, Meyer moves up

No. 4 pro Gabe Bolivar shocked the crowd when he brought in only three fish today after building up a solid lead after day three. His three bass today weighed more than 5 pounds less than his day-three catch, but his two-day weight of 18 pounds, 11 ounces was enough to earn him $7,350. (Kolender, who also caught 18-11, earned the better standing due to the day-two-standings tiebreaker. He finished third after day two, while Bolivar finished fourth.)

Clayton Meyer, who won the season opener on Lake Havasu, moved up from ninth to fifth on the strength of the day’s heaviest catch. Meyer caught only 1 pound, 15 ounces on day three, but brought in 11 pounds, 12 ounces on day four to take fifth place and $6,850 with a two-day total of 13-11.

Rounding out the top 10 pros on Lake Mead:

Coming up next on the EverStart trail is a Central Division event on Lake of the Ozarks April 20-23. The Western Division will wrap up the regular season May 4-7 with an event on the California Delta.