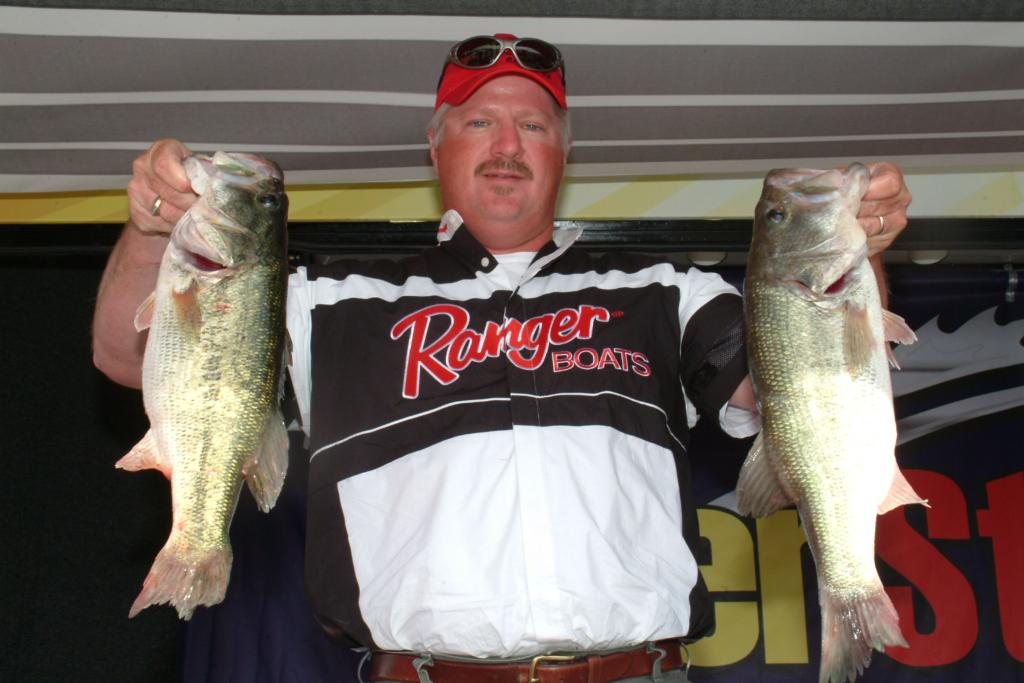 EUFAULA, Ala. – Rapidly falling water levels sent anglers scrambling to stay in the game at the EverStart Series Eastern Division event on Lake Eufaula, but round-one leaders pro Tim Peek of Sharpsburg, Ga., and co-angler Bryan Thrift of Shelby, N.C., who were paired together today, continue to dominate the field.

“I had my best day yet,” said Peek, who weighed in 23 pounds, 3 ounces today. “I spent a couple of hours in my best spot, culled a couple of times and then left. I ran some of my other water and caught a 6-pounder and a 4-pounder on a buzzbait to cull again.

“I’m on an incredible bunch of fish,” he added. “My co-angler (Thrift) has a huge bag of fish, too.”

While dropping water has hurt other pros in the field, it only seems to help Peek.

“There is so much bait in this place it’s unreal,” he said. “We caught eight catfish and two big hybrids mixed in with the bass.”

Everything is going according to plan for Peek, but he is yet to get over confident.

“It’s fishing and anything can happen,” he added. “I feel pretty good about what I’ve got going. I’ve got a nervous excitement about tomorrow. I’ve never been this close to a big win like this.”

“I’m going to totally fish the conditions tomorrow,” he said. “I have been running a little shad-spawn pattern in the morning and if it gets windy and nasty tomorrow I might just bail out of this shallow sight-fishing deal and run the windy shad places with a spinnerbait.”

After stubbing his toe with just two keepers yesterday, day one leader Jim Murray, Jr., of Arabi, Ga., made a comeback today with a limit weighing 15 pounds, 14 ounces for third.

“I started the morning fishing shallow grass but by about 10 o’ clock I hadn’t had a bite,” Murray said. “So I tied on a big spinnerbait and went fishing bluffs like I caught them the first day and rebounded a little.”

The forecast tomorrow is for wind and thundershowers, exactly what Murray wants for his shad-spawn bite to return in full force.

“That would be good, but the problem is, that’s going to turn these fish on for everybody,” Murray pointed out. “Just about everybody is fishing that way or something similar and windy weather is going to help them all.”

Patrick Pierce of Jacksonville, Fla., is one of those anglers hoping for rain tonight and

tomorrow. He is currently in third place with 14 pounds, 9 ounces and says the falling water is hurting him as well.

“I need the water to come back up,” he said. “They’ve dropped the lake 2 feet over the last two days and it has really scattered my fish. I’m having to adjust and do different things each day to keep up with them. Maybe if it would start raining tonight the water would start rising again and the fish would replenish.”

Pierce has been fishing in one major creek all week and says no matter what happens he is not planning on leaving his primary area.

Richard Szczerbala of New Hill N.C., moved up to his best position for the week, fifth, with four bass weighing 12 pounds even.

“The water has dropped several feet since I’ve been here and my fish are moving,” Szczerbala said. “I don’t know where they are going. I know they’re going deeper, but there’s really no structure around for them to go to. I didn’t catch a fish after 10 o’ clock today, so I need a new place to fish.”

Rounding out the top 10 pros in the EverStart Series Eastern Division event:

Thrift no stranger to lead

Leading fishing events is becoming old hat for co-angler Bryan Thrift. Not only is he

“I caught five bass, put my rod down and stayed out of Tim’s way the rest of the day,” Thrift said. “I caught two on a spinnerbait and three swimming a jig. It was just an awesome day.”

Since Peek and Thrift are the leaders, they will be paired up again tomorrow. It could be back-to-back co-angler wins for Thrift.

Matthew Parker of Whitesburg, Ga., is in third place with 7 pounds, 8 ounces.

Jerry Goble of Sherrills Ford, N.C., is in fourth place with 6 pounds, 3 ounces.

And Arch Cornett of Huntsville, Ala., is in fifth place with 4 pounds, 2 ounces.

Rounding out the top 10 co-anglers in the EverStart Series Eastern Division event:

The final day of competition begins at 6 a.m. tomorrow at Lakepoint State Park.