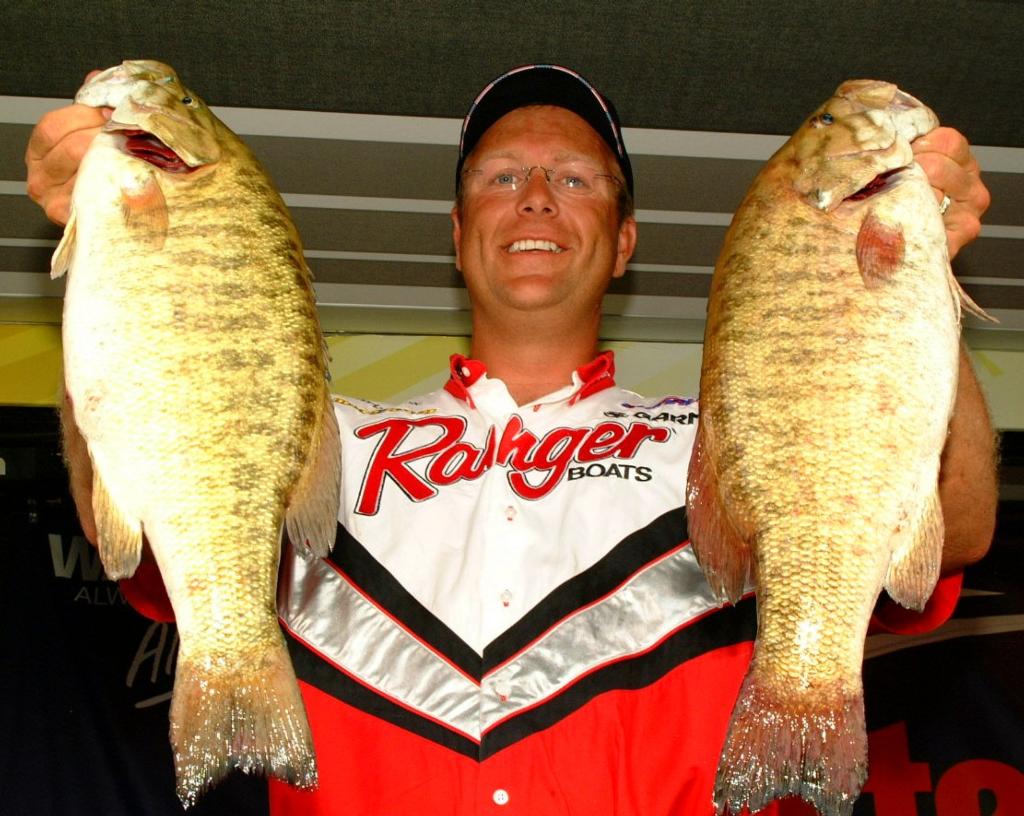 TRENTON, Mich. – Just when it seemed the weights couldn’t get any better in this week’s smallmouth bass bonanza on the Detroit River, pro Chris Cox blew away that notion by registering a staggering 24-15 sack Friday to handily lead the first day of the finals.

The weights had been impressive by any fishery’s standards in the opening round of the 2005 EverStart Series Northern Division opener – with multiple sacks breaking the 20-pound mark, including a 22-4 on day one – but Cox raised the bar even higher today, signaling an incredible conclusion to come Saturday at the final weigh-in. And the crowd loved it, already having been wowed by four other 20- to 21-pound-plus stringers before Cox crossed the stage with his monsters.

And here’s the kicker: Had it not been for a dead-fish penalty – a problem that has plagued many an angler all week long due to hot temperatures and bringing bass up from relatively deep waters – Cox would have weighed in 25-7. But no matter, he still leads even his closest competitor by 3 pounds, 12 ounces. However, when the fishing is this good, Cox said he’s not about to get cocky.

“There are too many good fishermen out here,” he said. “Any one of them could go out and do this tomorrow.”

Though catching the largest sack of the tourney thus far certainly instilled in Cox some confidence going into the final day, his Friday fishing began on a shaky note.

“My co-angler went out and caught three before me,” Cox said. “I lost my first fish, then I finally relaxed; my co-angler gave me a bait, and we went to work.

Cox has been fishing the same area on Lake Erie all three days, exactly 35.7 miles from the launch site at Elizabeth Park Marina on the Detroit River.

“We were fishing a rock pile, drop-shotting it, at about 27 feet deep,” Cox said. “It’s produces about 95 pounds in the past three days, including my co-anglers’ weights.”

While all of that is true and noteworthy, it was Struif’s fishing prowess that brought him to the stage and for which he will be remembered after the dust settles on this event. If he continues to perform the way he has all week – he has landed the second-largest sack two days running – he may even have a shot at dismantling the cliche “nice guys don’t get paid.”

“It’s just been a great tournament,” Struif said. “The people I’m fishing against are the best in the world.”

Of his chances tomorrow, he added, “The fish are there; I just need to catch them.”

Shaffer back in third

After leading the opening round, pro Dick Shaffer of Rockford, Ohio, found himself back in third place – the same position he occupied on day one. After losing a heart-wrenching shootout with last year’s Detroit River winner, Jim Liechty, by a mere 12 ounces, nobody is likely to want a win this week any more than the 2003 EverStart Series Championship winner.

Though he’s just a tad over 4 1/2 pounds behind Cox, Shaffer has shown great consistency over the first three days of the EverStart Northern opener. He has registered weights over 20 pounds every day, including today when he weighed in a five-bass limit weighing 20 pounds, 6 ounces. But oddly enough, his best weight, 21-4, came on day one when he missed more than half the day due to engine trouble.

“I think, really, I’m fishing too much now, because when I only fished a few hours, I caught more fish than I am now,” he said.

If he can match his own stride or even improve upon it Saturday, Shaffer clearly has a shot at the win.

Of his consistency and success in the EverStart Series and BFL, he said: “I get a lot of practice, I pay attention to the details, and I get lucky. I look for a little smaller stuff and a little different stuff than everybody else. If I find those areas, I do really well.”

Charlie Hartley doubled his worth today by leap-frogging four places up the leaderboard with a solid 18-10 stringer, despite losing a pound in dead-fish penalties. Hartley was last year’s Northern Division Angler of the Year and is also a veteran of the FLW Tour.

Though he’s been in the business for years, the always-energetic Hartley said he’s still in love with the sport and still learning new tricks.

“It’s a true passion; every time I catch one and my line goes, I don’t care how small, my heart goes tap-tap-tap,” he said.

According to Hartley, he won AOY honors up north last year with a single technique: dragging a green-pumpkin tube. But when Hartley started “getting zapped by my Northern competitors with a drop-shot” more recently, he decided it was time to give the method a try.

“It was hard to put that tube down; it has made me a lot of money,” he said. “But drop-shotting is a deadly technique on these Northern smallmouths.”

Obviously he’s getting the hang of it.

The opening round’s second-place pro found himself in fifth place today with a weight of 18 pounds event. Irvine, California’s Kota Kiriyama said he had a bad day, but was glad that his co-angler “had an awesome day.” However, the Western angler is pleased with his location and said it still has the potential to produce good weights.

“The weather has been good for us to get to Canadian water,” said Kiriyama, who has been fishing on Lake Erie. “If I can have the right bites … there are a lot, a lot of big fish in there.”

Rounding out the top 10 on day three of the EverStart Series Northern event on the Detroit River:

Pro Bryan Coates of Amherst, Ohio, dropped to the bottom of the top-10 pack today by only bringing in two keepers worth 10 pounds, 7 ounces. But both of those were of high quality, including a 6-7 kicker that stands as one of the heaviest fish weighed in so far this week in a heavyweight tourney.

Pro Art Ferguson III of St. Clair Shores, Mich., was behind the wheel of the lone boat heading toward Lake St. Clair today. Most of the big sacks have come from Lake Erie all week, but up until the finals, the majority of boats had gone north to fish in Ferguson’s neck of the woods.

Ferguson said of the change, “That was kind of eerie, no pun intended. I had 50 miles to run and looked back – and there was nobody behind me. I kind of had it all to myself, which was a little weird.”

Del Smith of Castalia, Ohio, pulled off a tremendous feat Friday, bagging the second-heaviest sack of the day from the back of Kiriyama’s boat. Smith, who is fresh off a Bassmaster Northern Open win last week on Erie at Sandusky, Ohio, managed to pull in a whopping five-bass limit weighing 21 pounds, 10 ounces.

According to Smith, his pro partner, Kiriyama, was instrumental in his amazing success on the water today, where pressure from seven or eight other boats was getting intense.

“Kota was great; he was protecting our spot real well,” Smith said. “We had about a 100-yard ridge we were drop-shotting.”

Not only was Kiriyama protective of his spot on Erie, he may have also been guarded about the techniques being employed within their own boat.

For an angler who didn’t know exactly how he was fishing, Smith put them in the boat to beat the band – not to mention his own boater and the rest of his division. Perhaps Smith is a bit protective of his own technique going into the final day. 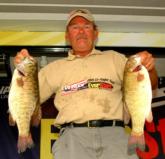 Second place in the Co-angler Division belonged to Cox’s partner, Charles Hasty of Toledo, Ohio, who pulled in five bass for 21-1 even with a half-pound penalty. Hasty got emotional as he told Jones and the weigh-in crowd how great it has been fishing with such great anglers all week, including some who gave him the opportunity to do some deep-water smallie fishing – a rare treat for him.

In third place was co-angler Jeff Hahn of Alliance, Ohio, who reeled in an impressive limit weighing 19-11, despite a pound’s worth of penalty.

Rounding out the top 10 co-anglers on day three:

EverStart Series Northern action resumes Saturday when the top 10 pros and 10 co-anglers take off from Elizabeth Park Marina in Trenton, Mich., at 6:30 a.m. Eastern. Saturday’s final weigh-in will take place at the Wal-Mart Supercenter at 7555 Telegraph Road in Taylor, Mich. It is free and open to the public, and children and families are invited to come early for parking lot activities including a trout pond for kids that kicks off at 2:30 p.m.