Reitz on the right spots, lands 16 pounds to lead pros at La Crosse 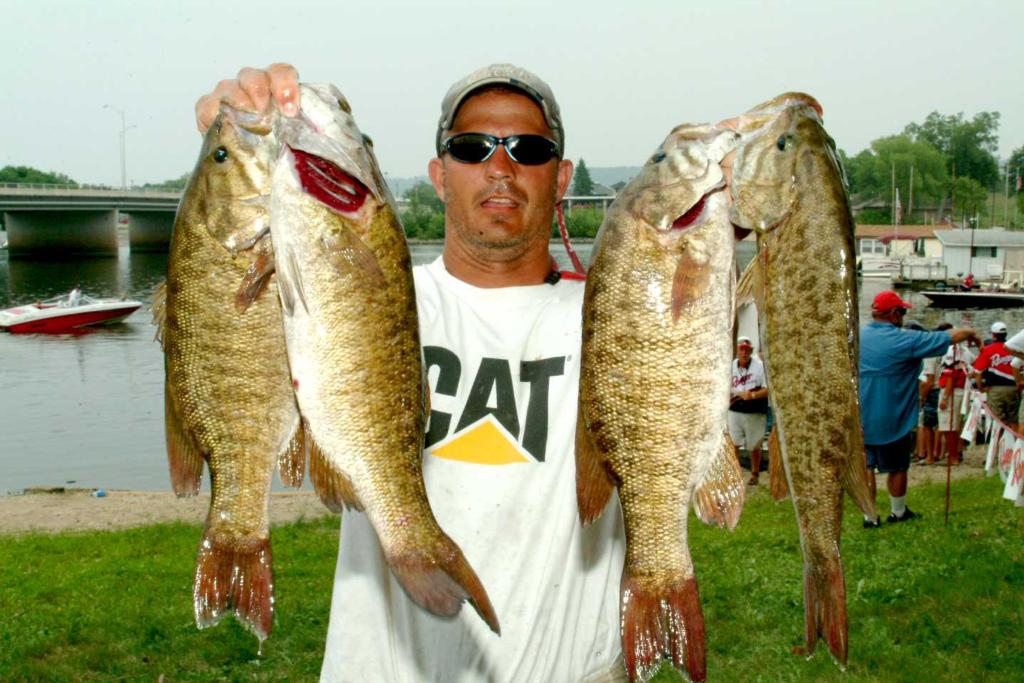 ONALASKA, Wis. – As predicted, EverStart Series anglers caught lots of bass on the Mississippi River Wednesday to open Northern Division competition, but there was a lot of grumbling about short-fish catches, too. Still, Clayton Reitz of Morton, Ill., landed a 16-pound-even five-bass limit to take what seemed like a strong 1-pound, 2-ounce lead in the Pro Division.

The anglers brought in a hefty array of limits consisting of both largemouth and smallmouth bass, with the smallmouth numbers probably edging out the largemouths. A lot of pros seemed to capitalize on a shallow topwater bite for largemouths early in the morning then moved deeper for smallies as the sun rose in the sky.

Reitz, on the other hand, stayed strictly on the smallmouth bite to open the event. Fishing in two of the four available river pools – which he was reluctant to name – he keyed on several of his big-fish areas and caught them early. He caught 10 keepers by about noon, and eventually culled out to a limit filled with solid 3- and 4-pound fish.

“Not to be cocky, but I’ve probably got about 20 areas to fish, and I hit just four of them today,” he said. “After that, I basically went and checked for new stuff in the afternoon. I left a lot of my stuff alone for tomorrow.”

Reitz said he used two different baits to catch them, but he’s also withholding the details on that bit of privileged information until later in the week, as well.

Until then, he doesn’t seem too fazed by his lead, which seemed stout since the rest of the leaderboard is tightly bunched up over a pound behind him. Reitz finished second at the 2004 FLW Tour Wal-Mart Open, so he knows a single good day does not a tournament victory make.

“Aw, I’ve been here before,” he said. “It’s kind of meaningless since the weights are resetting (after day two). My goal tomorrow is to go out, catch 12 pounds and try not to burn out my fish.”

Cedar Falls, Iowa, pro Robert Howland grabbed the second spot with a mixed-bag limit weighing 14 pounds, 14 ounces. He made a long run down into Pool 9 – tournament festivities are on Pool 8 at Onalaska – to fish waters close to home.

“I caught three largemouths on a topwater, and then the sun came up and killed that,” Howland said. “Then I went and fished current for smallmouth.”

Howland caught his smallies, which were three of his five kept fish, on Team Supreme swim jigs in 3 to 4 feet of water. Two of his smallmouths weighed in around 3 1/2 pounds, as did his biggest largemouth.

“They’re biting pretty good in the current,” he said. “As long as you have the right bait and you feed it to them right, they’ll bite.”

Rick Taylor of Holland, Mich., grabbed the third position for the pros with a limit weighing 14 pounds, 10 ounces.

“When you catch a 4- and a 3-pounder in this thing, it takes you a long ways,” he said. “I caught a 3-pound smallie at the last minute before I came in.”

Taylor focused on one relatively crowded area and said that he slowed his presentation way down to land his best fish.

“It’s a tough deal. The fish are following the bait; they’re not holding in one spot,” he said. “If you’re not following the bait, it’s tough to catch them. But when you do, these fish look like balloons because they’ve been eating a lot of shad.”

Fred Roumbanis of Auburn, Calif., grabbed the fourth spot in the Pro Division with a limit weighing 14 pounds, 6 ounces.

David McCrone of Minnetonka, Minn., slid into the fifth spot right behind Roumbanis with a limit weighing 14 pounds, 5 ounces.

Tom Monsoor of La Crosse, Wis., fishing his home waters, is probably the heaviest favorite at this week’s tournament. He handily won the last EverStart event held in the La Crosse area, in 2001, and comfortably slid into contention again this week by catching a sixth-place, 14-pound, 4-ounce limit on day one.

“Yeah, I caught a few on a little jig,” Monsoor said, referring to the homemade swimming jig he’s widely known to use. “But this is anybody’s game. These fish are a little scattered right now.”

Rounding out the top 10 pros after day one at the Mississippi River:

Conrad threw black and blue tubes around weed edges and rocks to catch his bass. “I had four smallmouth and one largemouth,” Conrad said. “We had to move around quite a bit to get our bites.”

Rounding out the top five co-anglers was Stephen Copps of La Crosse with a limit weighing 10 pounds, 13 ounces.

Day two of Northern Division competition at the Mississippi River begins as the full field of 200 boats takes off from Clinton Street Landing at 6 a.m. Central time Thursday for the second half of the opening round. Following tomorrow’s action, both fields will be cut to the top 10 anglers apiece based on two-day total weight.