Hall walks away with it 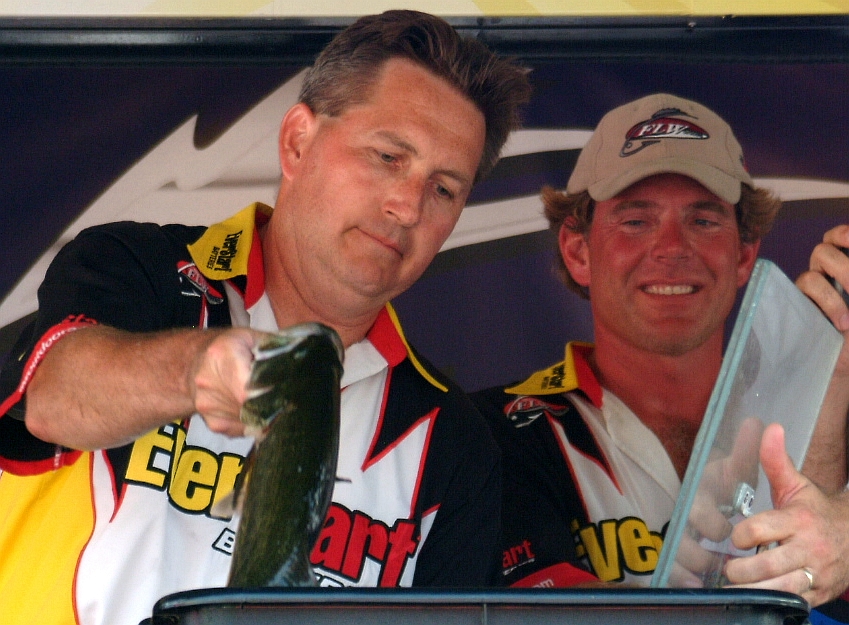 WOODBRIDGE, Va. – He had trouble with the sunny weather and he didn’t even catch a limit, but Michael Hall somehow persevered Saturday and won the Pro Division of EverStart Series Northeast Division competition at the Potomac River by heading off a strong comeback attempt by Rick Morris.

The stage was set when Morris, sitting 5 1/2 pounds behind Hall coming into the day, mounted the weigh-in stage with a five-bass limit weighing 13 pounds, 12 ounces and took the lead with a final, two-day total of 25-0. Then Hall, who led Friday with a weight of 16-12, came to the scale, but he only had three bass in his bag.

“I really thought the weather was going to be different this morning. When the sun came out, I knew it was going to be very tough,” Hall said. “I talked yesterday about this river being fickle, and it got fickle today.”

Nevertheless, Hall’s three fish were of relatively good size. They weighed in at 10 pounds, 11 ounces, pushed his final total to a winning 27-7 and crushed the hopes of a resurgent Morris by almost 2 1/2 pounds.

Hall – a 52-year-old electrical engineer from nearby Annandale, Va., who was competing in his first EverStart event – took home $9,400 and a new Ranger boat for the win.

And this tournament basically was his to lose. Hall led three days of the event – Wednesday, Friday and Saturday – and never seemed to miss a step.

However, the return of the heat and sun Saturday did throw him a curveball. He caught his big stringer Friday under rainy, windy conditions. Those conditions changed drastically on the final day.

“This morning, we went into the area where we’ve been all week. The fish were eating bait fish, and the birds were feeding on bait fish, so it looked really good,” Hall said. “On my first cast, I caught a nice keeper, but it came off. It was the first fish I lost all week. And then it really got slow.”

As the sun burned off what remained of the cloud cover, Hall’s bass bite shut down. But he adjusted, moving into deeper water to try and scratch out a few keepers. Eventually, he was able to land two good, 3- to 4-pounders plus another keeper. He caught his two big fish on a 5-inch, watermelon-and-purple Yamamoto Senko and the other one on a 5-inch, pumpkinseed-and-green Senko, both of which were the baits of the week for Hall.

“I was fishing at 5 feet, which is pretty deep for the Potomac,” he said. “These fish were feeding on 5-inch-long shad, which is why I was using a 5-inch Senko.”

In addition to going deep, Hall, who rigged his Senkos wacky-style, said the key to enticing a bite when it got tough was the speed of his presentation – or lack of it.

“I was fishing slower than slow,” he said, “which can be hard to do when fishing in the finals of a big tournament like this.” 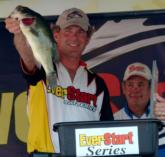 Morris gets bit, comes up short

Morris really had the best day Saturday – his was the leading stringer by 3 pounds – but he just couldn’t overcome the deficit he fell into Friday. Still, he earned $9,400 for second place.

“I am frustrated because I had a chance to win this tournament,” the pro from Lanexa, Va., said. “But I had a great week, and I’m happy with second. I love the Potomac, and I look forward to next year.”

Morris was frustrated by the loss of a 5-pound bass Saturday. He pitched a 200 Series Bandit crankbait to wood cover and said he caught around 15 keeper bass.

But it was the one that got away that hurt.

“The key to fishing this place is to find one area where the fish move up and just sit there through the whole tide,” he said. “I had to make repeated casts to the same piece of wood before they would bite.”

Pro J.T. Kenney of Frostburg, Md., finished in third place and added his fourth top-10 finish in EverStart competition this year to go along with his two Wal-Mart FLW Tour top-10s.

Flipping thick grass, Kenney caught another limit – the second heaviest of the day at 10 pounds, 12 ounces – but it wasn’t enough as his final total topped out at 23-6. He earned $8,600.

“I sometimes tend to pull a big one out on the last day, but not today,” he said. “This is my sixth top-10 this year without getting a win, and that’s pretty tough. I’m getting hungry.”

The closest challenger to Hall at just 1 pound off the lead coming into Saturday, pro Scott Dameron of Beckley, W.Va., could only muster three bass for 3 pounds, 11 ounces and finished fourth with a final weight of 19-7.

“Being from West Virginia, we don’t have a lot of tidal water. It kind of changed on me today,” he said. “I got up this morning and I thought I had it all figured out. But when I got there, everything was backward.”

Chris Poole of Manassas, Va., rounded out the top five pro finishers with a final total weight of 17 pounds, 7 ounces. He caught a limit worth 8-1 Saturday.

Rounding out the top 10 Pro Division finishers at the Potomac River:

Aaron Hastings of Middletown, Md., has the top spot in the Northeast Division pro standings. He finished 12th here at the Potomac River this week and has not finished outside the top 15 all season long in the division. Last month, he finished second at Lake Erie. Hastings leads second-place Pete Gluszek of Franklinville, N.J., by 29 points heading into the last event of the season.

The next EverStart Series event is a Northern Division contest on Lake Michigan at Escanaba, Mich., Aug. 24-27.

The next Northeast Division tournament will be the fourth and final event of the regular season, held on Lake Champlain at Plattsburgh, N.Y., Sept. 14-17.