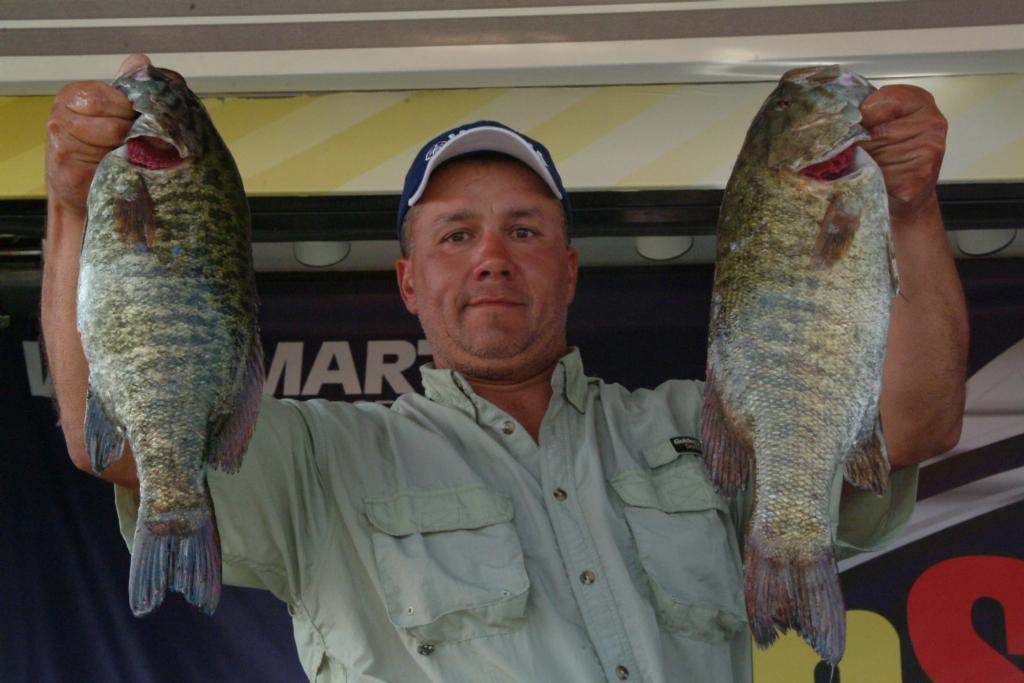 ESCANABA, Mich. – Though more anglers crossed the scales on the second day of EverStart Series Northern Division competition on Lake Michigan, the total number of bass caught and the weights brought in were down, perhaps adding credence to the theory that fishing pressure would affect the bite on day two. However, on a fishery like the Bays de Noc, “down” still ranks pretty high, as the leading two-day weight topped the 36-pound mark.

With Little Bay de Noc, Bay de Noc and Lake Michigan all for the taking this week, one would think fishing pressure wouldn’t be as big of an issue, particularly when practically everyone says the fish are scattered. Even so, competitors reported scenarios of 10 boats or more all trying to milk the same fishing holes.

A slight change in conditions early this morning also added to the confusion, as higher winds created some rough water that gave anglers making a long run a tough row to hoe in the day’s first few hours of competition. However, the wind soon died down and the sun shone brightly, basically re-creating conditions from day one even though forecasts called for cloudy skies.

Though the numbers did drop on day two, the waters surrounding Escanaba have established themselves this week as a better-than-average bass fishery, proving the area has more to offer than its legendary walleyes. One hundred and eleven out of 134 pros brought in fish today, and the heaviest fish was an impressive 5-pound, 7-ounce smallmouth weighed in by No. 8 pro Richard Lowitzki.

Leading the Pro Division with a two-day weight of 36 pounds, 9 ounces is Green Bay, Wis., angler Gary Adkins, who actually improved his catch over day one by 7 ounces. Adkins caught 18-1 Wednesday to tie for fifth and weighed in 18-8 today to lead the pack by nearly 4 pounds. Unfortunately for Adkins, though, weights are cleared for Friday and Saturday’s competition, and he’ll start the day tomorrow on equal footing with the rest of the top 10.

Working in Adkins’ favor is the fact that his fish seem unaffected by the weather, as he has utilized a deeper-water pattern as opposed to the largely shallow-water pattern employed by what seems to be the majority of anglers this week.

“I’m working in 20 to 25 feet,” said Adkins, whose Green Bay address is also on the shores of Lake Michigan to the south of Escanaba. “I’m not getting as many bites, but the ones I’m getting are big ones.”

Adkins, an EverStart rookie currently ranked 30th in Northern Division points, said he’s making an approximate 25-mile run south to get to his hot spot and, as such, hopes for good weather to enable him to make it there tomorrow. As anyone familiar with the Great Lakes knows, a stiff wind makes anything resembling a long run a risky venture.

Adkins reported that he’s catching his bass dragging tubes and said he fished in some company today, sharing his spot with about 10 other boats. Unless several of those people also made the finals, Adkins should have an easier time of it tomorrow with the field cut to the top 10 pros and 10 co-anglers. By the sound of it, it’s a sweet spot indeed, relatively unaffected by fishing pressure as it replenishes itself with fish from surrounding water.

“There are fresh fish moving up under the reefs,” he said.

Making his lofty position even sweeter is the fact that Adkins is originally from Escanaba. Because this is the first-ever major bass tournament held in this town, this is the first chance Adkins has had to showcase his bass-catching skills to the old home folks.

“This is kind of a homecoming for me,” he said. “I grew up in Escanaba, and this is the first time I’ve been back.”

Robert Sherry of St. Charles, Ill., should consider himself a lucky man. The Northern Division veteran caught 17 pounds, 2 ounces today to bump up his two-day total to 32-14 and enter Friday’s competition from the No. 2 spot despite a broken livewell and trolling motor.

He also caught 10 bass today, a feat in and of itself, but one made more impressive by not only his mechanical problems but also because of a long run that would have already shortened his fishing day had he not also decided to check in an hour and a half early due to his ailing aerator.

“We got out there and hit some pretty good waves going to Washington Island,” he said. “The aerator went down, so we were using ice and natural water.”

Sherry’s conservation efforts paid off, as all five of his best keepers were weighed in alive. He estimates his run to Washington Island to be about 35 miles.

“Basically I just got a couple of bigger bites,” Sherry said of his day-two performance. “It was about the same – I caught 10 yesterday and 10 today. But this time I had to stop five times to fill up my livewell.”

Indeed, Sherry improved his day-one catch of 15-12 by just more than a pound to score his second EverStart top-10 finish. He, too, dealt with a little bit of boat traffic today, sharing his area with about four other pros.

“Today it was windier, and that helps the bigger fish bite,” he said. “Hopefully those three or four other boats won’t be in there tomorrow.”

Local pro Derick Buchbinder of nearby Rapid River caught 32 pounds, 5 ounces of bass over two days to land in the No. 3 spot after the opening round. Buchbinder said he did not return to the spot where he caught 16-10 yesterday and made a shorter run to an undisclosed location.

“I fished all new fish today,” he said. “Yesterday’s fish were gone. I live nearby, and I just used experience.”

He said he’s mainly fishing shallow water, and he counts himself among the anglers who need a little wind to coax their fish to bite. As for whether or not his fish can last him through the final rounds, Buchbinder is unsure.

“I can just cross my fingers and hope,” he said.

Rookie, veteran round out top five

Fred Roumbanis of Auburn, Calif., who won the EverStart Northern event on the Mississippi River just 19 days ago, finds himself in contention for back-to-back victories with another trip to the final round. Roumbanis, an EverStart rookie, caught 32 pounds, 3 ounces of bass over two days to end day two in the No. 4 spot.

Veteran pro David Gliebe, a West Coast angler who now makes his home in Benton, Ky., rounds out the Pro Division top five with his two-day catch of 31 pounds, 10 ounces.

Rounding out the top 10 pros who advanced to the final rounds on Lake Michigan:

Co-angler Jeff Bratonia of nearby Rapid River is fishing his first career EverStart this week on his home waters and leads the pack with a two-day catch of eight bass weighing 24 pounds, 11 ounces.

Bratonia managed only 8 pounds, 7 ounces on day one – still good enough for 17th – and made the leap to the top with a day-two catch of 16 pounds, 4 ounces, one of the day’s best. The heaviest one of the bunch weighed in at an impressive 5 pounds even.

As a local angler with a lot of Bays de Noc knowledge, Bratonia was not inclined to describe too specifically what he was doing out there on Lake Michigan.

“It’s a shallow flat in Little Bay,” he said, noting that the spot he fished today was the key to his division-leading weight. “I live here; this is my water. This is fantastic.”

Bratonia said he had a limit early today, which allowed him to cull two fish later en route to his 16-4 limit.

Paul Nogalski of Germantown, Wis., moved up two spots to end the opening round as the No. 2 co-angler. Nogalski caught a limit yesterday totaling 15-15 and managed 7-11 Thursday for a two-day total weight of 23-10.

This is Nogalski’s second career EverStart event and his first top-10. He was the last angler to weigh in today and was unsure his three-bass sack would be enough. It was, and with plenty to spare. His two-day weight falls just over a pound behind the leader and more than 5 pounds above the top-10 cut weight.

Jones takes it to the other side

Jim Jones of Big Bend, Wis., who scored a top-10 finish earlier this month as a pro on the Mississippi River, proved he can bust a big sack from the back of the boat as well, earning a second consecutive top-10 finish with a two-day total weight of 23-10. That total matched Nogalski’s opening-round numbers, with Nogalski winning the tiebreaker by virtue of his day-one finish.

“My wife’s going to be disappointed; she wanted me to come home,” said Jones, who attributed his success to his pro partners.

He said he caught all his fish on a spinnerbait in Little Bay de Noc, fishing shallow water on the sand drops.

“The wind turns the fish on and off and creates current,” he said. “The key seems to be the direction of that current.”

Jenkins, Zeisner hang on for top-fives

Andy Jenkins of Elkhart, Ind., moved up one spot to end the opening round as the No. 4 co-angler with a seven-bass catch totaling 21 pounds, 14 ounces. Behind him in fifth is yesterday’s No. 2 co-angler, Jeff Zeisner of Arva, Ontario, who earned his second career top-10 thanks to a two-day catch of six bass weighing 21-10.

Rounding out the top 10 co-anglers who advanced to the final rounds on Lake Michigan:

What’s up for tomorrow

Day three of Northern Division competition in the Bays de Noc on Lake Michigan begins as the semifinal-round field of 10 boats takes off from Escanaba Harbor, located in Ludington Park in downtown Escanaba, at 7 a.m. Eastern time. Anglers’ weights are reset to zero for Friday, and winners in both fields are determined by the heaviest accumulated weight over the next two days.