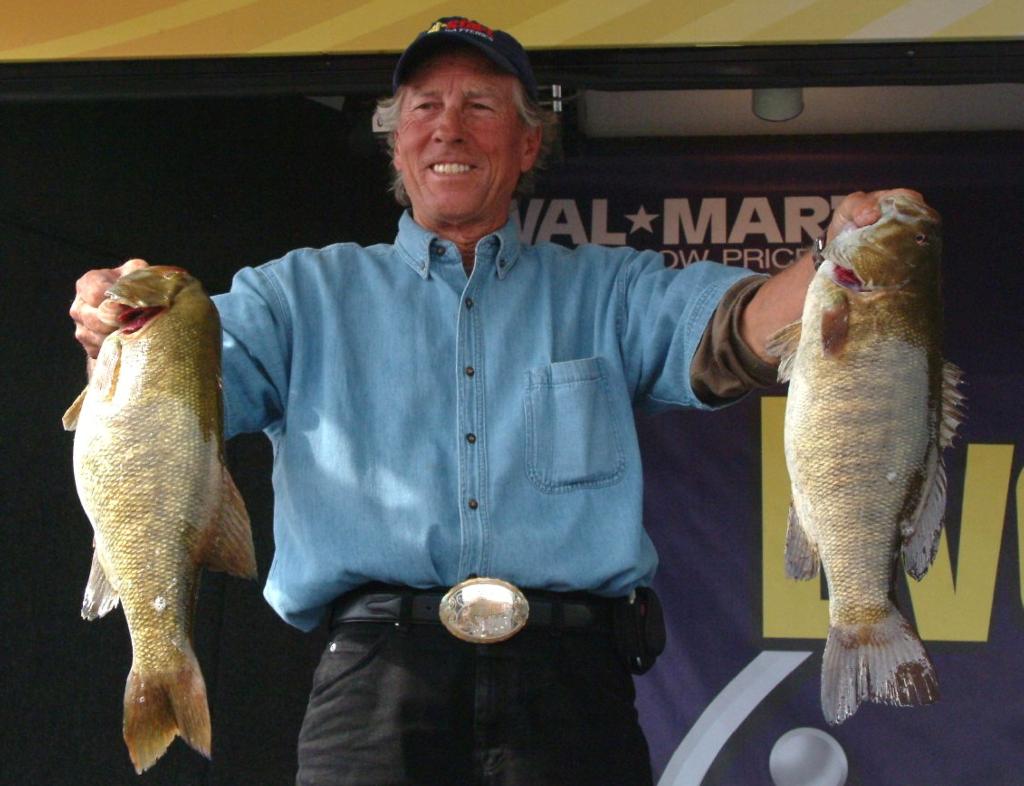 ESCANABA, Mich. – Fishing pressure. Cold fronts. Big waves. All and more have been blamed for a slower day-two bite on the Bays de Noc during the third EverStart Series Northern Division event of the season. But on day three, it took a veteran angler competing on a relatively new bass-tournament site to show the world what Lake Michigan has to offer, and that is a motherlode of bass.

Except for two goose eggs, no pro brought in less than 10 pounds on day three, with the granddaddy of them all going to a familiar name – the venerable David Gliebe, a West Coast angler turned Kentucky resident turned Northern Division heavyweight. Gliebe hauled in the tournament’s heaviest stringer so far at 22 pounds, 4 ounces to enter the final day of competition with a 2-pound, 14-ounce lead over Richard Lowitzki, no slouch himself with 19 pounds, 6 ounces.

Gliebe, credited with inventing the pitching and flipping technique alongside fellow legend Dee Thomas, caught his jaw-dropping limit today slowly throwing a tube bait in an area about 20 minutes from the launch site at Escanaba Harbor. His catch was anchored by a 5-pound, 11-ounce smallmouth.

“In eight days of prefishing, I couldn’t get bit anywhere,” Gliebe said. “I idled over some breaks and saw blobs on the graph. I threw in a tube and caught a 5-pound bass.”

Gliebe has continued to milk that spot for three days now, saying he caught five today and lost three. He described his area as a gently sloping rock island, navigating it by holding his boat in the wind with his trolling motor.

“I got on them today because I respooled with lighter line when I saw all these fish suspended on the graph,” he said.

He first dropped the tube about 10 feet and missed a bite. The same thing happened a little lower until finally his bait hit bottom. On its way back up, the 5-11 slammed the offering.

“There are a lot of fish there; it’s just locating where they’re hanging,” he said.

Working in Gliebe’s favor is the fact that his bass are biting in all weather conditions. Though air temperatures have remained steady throughout the tournament, competitors have battled a few isolated incidents of heavier wind that produced swells ranging from 3 to 5 feet.

“It was nice out there today,” Gliebe said. “A slack wind would make it easier, but I can catch them either way.”

Lowitzki also has best day yet

Three spaces in the leaderboard separate No. 2 pro Richard Lowitzki and No. 5 Robert Sherry, but they can thank each other for getting as far as they have.

“Bob and I fished this area together, and we’ve been making the same milk run the whole tournament,” he said. “I think we’re on a spot that might hold fish to win this thing.”

Lowitzki caught a limit of bass today that weighed 19 pounds, 6 ounces to put himself in contention for his first major tournament win. Lowitzki is a Northern Division veteran who has also made quite a name for himself as a co-angler on the Wal-Mart FLW Tour, where he has four top-10s.

“I just made an adjustment today,” Lowitzki said of his day-three performance. “By 9 o’clock I had no fish, and I was angry at myself. I went to a spot I found in practice, and I had these fish in an hour.”

With a limit in the livewell, Lowitzki then put down his rods to allow his co-angler partner, leader Mark Sturgill, to catch his own limit. By doing so, Lowitzki thinks he figured out something that could help him out tomorrow.

“If I can catch 18 pounds tomorrow, then I have a good shot at winning,” he said. “I can’t do much better than that.”

Heading into the final round from the No. 3 position is Holland pro Rick Taylor, who brought in a limit of bass today weighing 16 pounds, 11 ounces, his best weight of the tournament so far.

On stage, Taylor talked about having a change of heart about the Bays de Noc area, acknowledging the fact that it is indeed teeming with bass.

“I enjoy this place,” he said. “When I first got here, I said, `This place sucks.’ I didn’t realize how many fish were here until I sat down and started working an area. They’re biting.”

Though Taylor’s hometown is situated on a different part of Lake Michigan, he said the fishing in Escanaba is totally different than what he is used to.

“It’s not like anything we’ve fished before,” he said.

Peiser, Sherry round out top five

Indianapolis pro Mark Peiser caught five bass today weighing 15 pounds, 7 ounces to end the day in the fourth spot. “This is the best I’ve ever done,” he said, adding that this is only his fourth tournament. “I came across a spot at 1 o’clock Tuesday, and it’s been a great spot. I think I can go down there tomorrow and do the same thing.”

Behind him in fifth is Robert Sherry with a limit weighing 15 pounds, 2 ounces. He described his day as a slow starter, with his luck improving as the wind started to blow.

“I went two hours this morning without a hit,” he said. “As the day went on, the wind picked up and the fish turned on.”

Sherry said he’s fishing the Washington Island area and encountered 2- to 3-foot swells on the ride back in.

Rounding out the top 10 pros after day three on Lake Michigan:

On the co-angler side, Lowitzki’s partner Mark Sturgill of Wyandotte landed five bass today that weighed 16 pounds, 1 ounce, a stringer good enough to put him ahead of his nearest competition by more than 2 pounds.

Indeed, Sturgill lives right on the shores of Lake Erie, meaning today’s technique came quite naturally. Calling Lowitzki a “class act,” he benefited from the pro’s voluntary break from fishing to land his own limit.

“He was kind enough to stop fishing and let me get my limit,” Sturgill said. “Who knows how much weight can come out of that spot.”

“I had three days, three great partners and an exciting time,” Stephens said. “It’s above my expectations.”

Scot Keefe, who before Gliebe’s monster catch had landed the tournament’s heaviest stringer, finished the day in fourth with a five-bass catch weighing 10 pounds, 9 ounces. He’s currently 23rd in points and has three top-10 Northern Division finishes to his credit, including this one.

Scott Jones of Louisville, Ky., caught only two bass today weighing 6 pounds, 14 ounces but still found himself in the upper ranks as the No. 5 co-angler after day three. He’s currently 34th in points and has EverStart top-10 finishes in two divisions.

Rounding out the top 10 co-anglers after day three on Lake Michigan:

Anglers will take off on the final day at 7 a.m. from Escanaba Harbor, located in Ludington Park in downtown Escanaba.