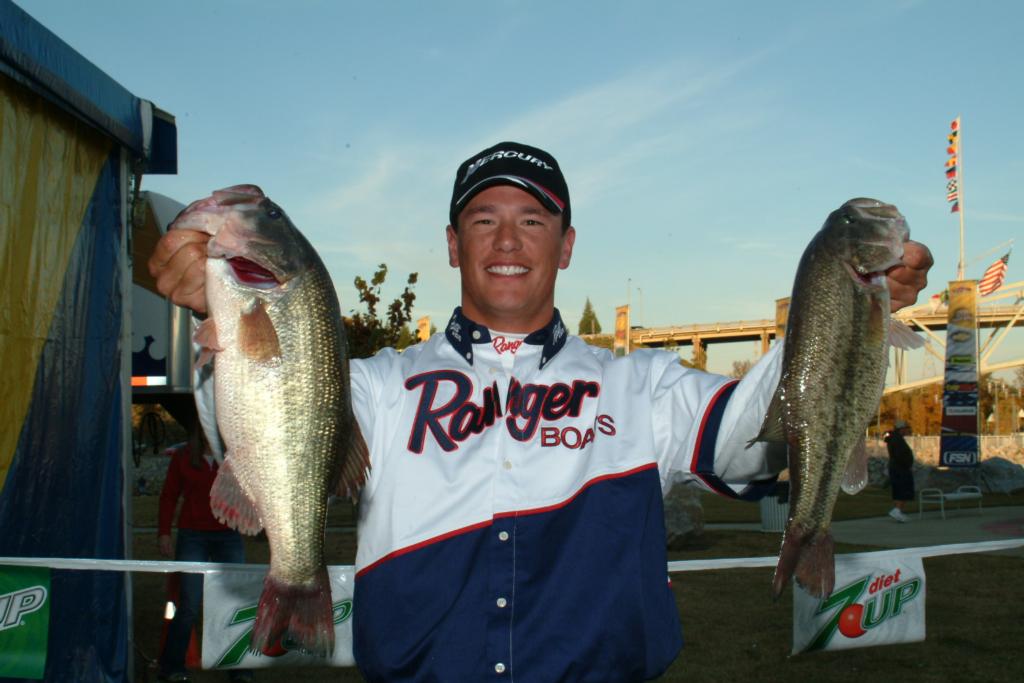 Got socks? … California pro Gabe Bolivar drove 30 hours to get here, only to have everything in his truck stolen on the first day – not exactly the Southern hospitality he was expecting. “They stole everything I had – all my clothes,” Bolivar said. “I had absolutely nothing but the clothes on my back.” … It seems Bolivar, upon arriving in Florence, parked his truck at the boat ramp and blasted off for a day of prefishing. But when he returned, he found that some wily thieves had managed to unlock his truck and make off with its entire contents. “Scott at Ranger Boats sent me a whole box of clothes so I wouldn’t have to buy a bunch of new shirts,” he said. “I went to Wal-Mart and bought some socks and underwear.” … The new shirts must have been lucky – Bolivar mustered only 2 pounds, 5 ounces yesterday but busted a 14-pound, 6-ounce stringer today to squeak into the finals in the 10th position. “I drove here 30 hours, slept five in the truck, got here dirt tired and they stole everything out of my truck,” he said. “But I’m happy.” After all, the winning paycheck of $100,000 will buy a whole lot of shirts and socks.

Good samaritan … Though Bolivar may not be having the best week ever, pro Bill Chapman, in contrast, benefited from the kindness of one very observant Florence fishing fan. “I was coming into weigh-in, and I had lost my lower unit,” Chapman said. “So I left (my boat) drifting. There was a guy who lived up on the bluff, and he was watching the boats come in. While I was weighing in, he launched his boat and hooked to mine and was towing it in before I could get back out there.” Not only did the hospitable stranger save Chapman a bunch of trouble, he also spared his boat a good bit of damage. “With the current, I was afraid it would get up on the rocks and get beat up, but it didn’t,” he said.

Love hurts … Co-angler Renee Hensley won the EverStart Championship back in 2001, but this year seemed to be her husband Brian’s chance. Though Brian Hensley entered day two in 47th position, he caught a respectable 8-pound, 14-ounce sack today that had him perched in the 10th spot for quite a while – a position that would, of course, have advanced him to Friday and Saturday’s final rounds. In the end, Brian finished 14th, out of the top 10, but Renee’s day-two partner might be the one taking the blame for that. Roy Hawk leapt from 81st to sixth thanks in large part to a fish that Renee netted in the air, bumping Brian out of the top 10. But don’t cry for them too much – between the two of them, the Hensleys earned $19,000 in two days of fishing. Not bad.

Alternative medicine … We mentioned yesterday that co-angler Shirley Richardson advanced to the championship by virtue of her husband James’ lofty Northern Division ranking. However, Shirley had to do her own maneuvering to make sure she made it to Florence this week. Shirley, who competed in the Southeast Division, was nearly on her way to the final event on West Point when she started to feel a little under the weather. “It was about a week before we went to the last tournament,” she said. “I was feeling bad, and I said, `I can’t be sick!’ The doctor said, `It’s pneumonia. You’re going to the hospital.’ I said, `Is it contagious?’ He said, `Not yet.'” That was all she needed to hear – after about 10 minutes of arguing, Shirley emerged victorious, spending the week on a boat instead of a hospital bed. We’re not sure we’d recommend that for everyone, but we’re glad it worked for you, Shirley.

Ups and downs … The top of the leaderboard saw quite a shift today from yesterday, as four pros made unlikely leaps into the top 10. Sam Newby of Pocola, Okla., jumped from 83rd to fifth; Roy Hawk of Salt Lake City went from 81st to sixth; Toby Hartsell of Livingston, Texas, advanced from 67th to eighth; and Gabe Bolivar leapt from 113th to 10th. On the co-angler side, the biggest mover was Steven Christensen of Ferron, Utah, who went from 59th to fifth. Jerry Goble of Sherrills Ford, N.C., enjoyed a similar leap, moving from 57th to 10th in the co-angler standings. … On the flip side, a few anglers experienced a reversal of fortune. Four pros from yesterday’s top 10 blanked today – Mike Webber, Lloyd Pickett Jr., Art Garza and Matt Herren. More than half of yesterday’s co-angler top 10 came up empty today, as Rick Turner, Gene Miller, Gene Purdy, Christopher Hall, Brian Mlekush and Mike Drain all goose-egged.

Family ties … This week’s EverStart Series Championship featured at least two father/son combos, as Jimmy and Matthew Mize both qualified, as did Jim and Troy Eakins. “I grew up fishing with him all my life,” Troy said of his fishing father. “It’s kind of a team event, working together to find fish.” Jim agrees. “We love to fish together,” the elder Eakins said. “We fish just exactly alike. We can fish a lake at a different time, and we’ll end up on the same bank.” Like father, like son.

2: Number of times day-one leader Steve Kennedy had fished Pickwick before this week’s event. Kennedy ended the opening round in fourth.

15: Amount of time, in minutes, that it took Jonathan Newton to catch 14 pounds, 12 ounces of bass on day two. He caught four and didn’t land another one all day.

“I’ll be deer-hunting tomorrow.” – No. 16 pro Dan Morehead, the perennial outdoorsman, on why he’s not too upset he ended the tournament outside the top 10.

“You should have seen the one that got off.” – Co-angler leader Gilbert Herald, after holding up the two hefty bass that comprised his 8-pound, 1-ounce sack.

“He helped me get this fish, and he also took the hook out of my finger.” – No. 7 co-angler Donna Newberry on her day-two pro partner Jere Hayslett, who got her on the one bass that took her to the top 10.

“I’ve got a limit.” – Co-angler Gary Key on his five children, three of whom accompanied him to the stage.