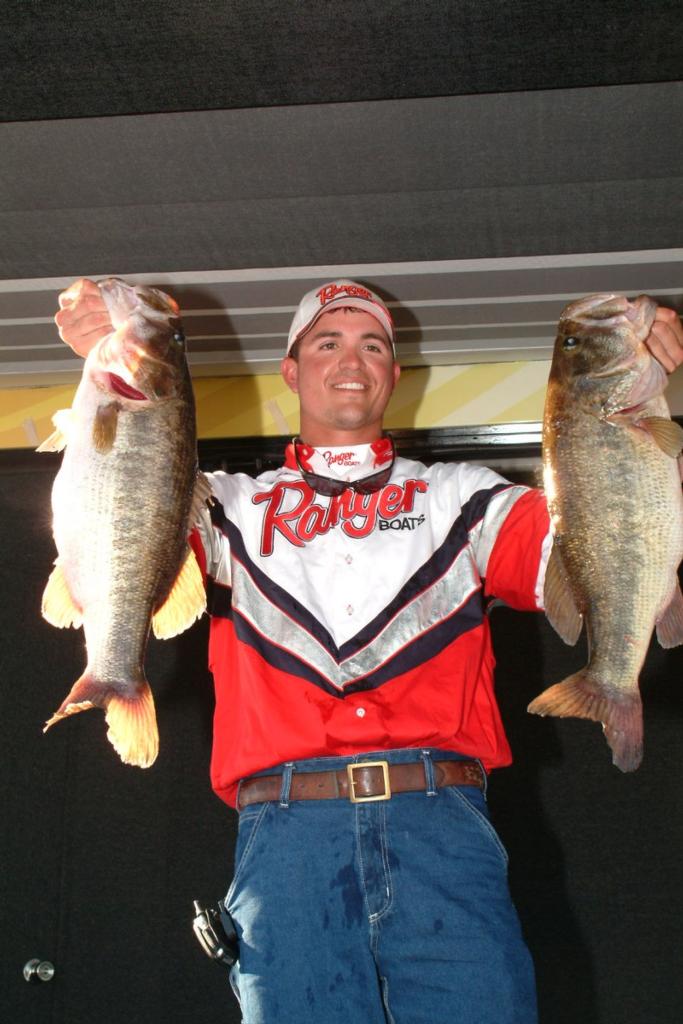 OKEECHOBEE, Fla. – The Big O has been wind-beaten and wave-battered by hurricanes. Her waters are turbid and muddy; her shores are barren of vegetation. Naysayers even contend that the lake is in the worst shape of all time.

Yet somehow, in some way, the famed fishery continues to pump out bass like a fish factory on steroids.

Not too bad for a lake that’s endured five hurricanes in two years.

This is Ashley’s first trip to the Big O, and perhaps his fresh outlook, void of any previous Okeechobee notions, has helped him develop a unique pattern.

“I am fishing a spinnerbait fast,” Ashley reported. “I made a long run this morning, made one quick pass through my area with the spinnerbait, caught seven keepers and left.”

Ashley says he has no intention of returning to his area tomorrow.

“There are still a lot of fish in there,” he added. “I will try to survive somewhere else tomorrow and save those big fish for the finals.”

Above all, the young pro, who just came out of the Wal-Mart Bass Fishing League (BFL) ranks, is trembling with excitement over his rookie Stren Series catch.

“This is unreal,” he said. “I found these fish Monday, and I’ve been shaking ever since.”

Timothy Little of Acworth, Ga., is in second place with 20 pounds, 14 ounces.

Little’s five-fish limit was anchored by a pair of Okeechobee lunkers weighing 7-5 and 6-7.

“I was fortunate and got two big bites today that made all the difference,” Little said. “All I can really say now is that my big bites have been coming in the afternoon.”

Little reported both casting and flipping plastics to catch his fish.

“Tomorrow, I want to avoid those big bites,” he laughed. “I just want to get a 10-pound limit to keep me in the top 20. If I get a limit early, I’ll probably go check some new water.”

Another angler making his pro debut in the Stren Series is Bryan Thrift of Shelby, N.C., who is currently in third with 19 pounds, 6 ounces.

Thrift isn’t exactly a rookie of the Stren Series, though. Last year the young angler enjoyed a phenomenal season as a co-angler in the Stren Series (then called the EverStart Series) by winning two co-angler titles in the Southeast Division at Lake Eufaula and Santee Cooper.

This year he has switched to the pro side, and it looks like his step up is already paying off.

Thrift is using a unique bait called a Chatterbait, a type of swimming jig with a blade in the front, and it seems to be working everywhere he puts it, including on his co-angler’s rod.

“I gave one to my partner and he’s now in second place in the Co-angler Division.” Thrift said. “Between the two of us, I bet we caught 40 bass on it.”

Rick Ankenbauer of Clearwater, Fla., is in fourth place with 18 pounds, 9 ounces.

Ankenbauer reported catching his fish on a mixture of flukes and spinnerbaits and by flipping plastics in the Moonshine Bay area.

“I’m fishing an area as opposed to a specific pattern,” Ankenbauer said. “I’m using a variety of lures and alternating between them as I work the area. The two biggest fish did come flipping, and I caught another decent one on a spinnerbait.”

Ankenbauer commented that Moonshine Bay was a bit crowded this afternoon.

“I bet half the field is there, but there’s also a ton of fish in there,” he added.

Bowen back on big stick for fifth

Billy Bowen of Ocala, Fla., a name virtually synonymous with the heavy-flipping technique on Okeechobee, is in fifth place with 17 pounds, 8 ounces.

And as most might have guessed, he caught his fish flipping.

“That’s why I love it,” Bowen said of the flipping technique as he showed off his big bass.

Greg Vinson of Wetumpka, Ala., caught the day-one big bass in the Pro Division weighing 10 pounds even. He is in sixth place with 17 pounds, 6 ounces.

Rounding out the top 10 pros in the Stren Series Southeast Division opener on Lake Okeechobee:

Rodrigue’s five-fish limit was anchored with two 6-pound-plus twin bass, which both bit a Zoom Fluke.

Co-angler Lance Henderson of Fort Ogden, Fla., is in second place with 14 pounds, 12 ounces. Henderson caught his biggest bass on a spinnerbait and then borrowed a Chatterbait from pro partner Bryan Thrift to finish his limit and cull up.

Co-angler Keith Carson of Debary, Fla., is in third place with 12 pounds, 8 ounces.

Co-angler Brian England of Lafayette, Ga., is in fifth place with 11 pounds, 5 ounces.

Rounding out the top 10 co-anglers in the Southeast Division Stren Series on Lake Okeechobee: