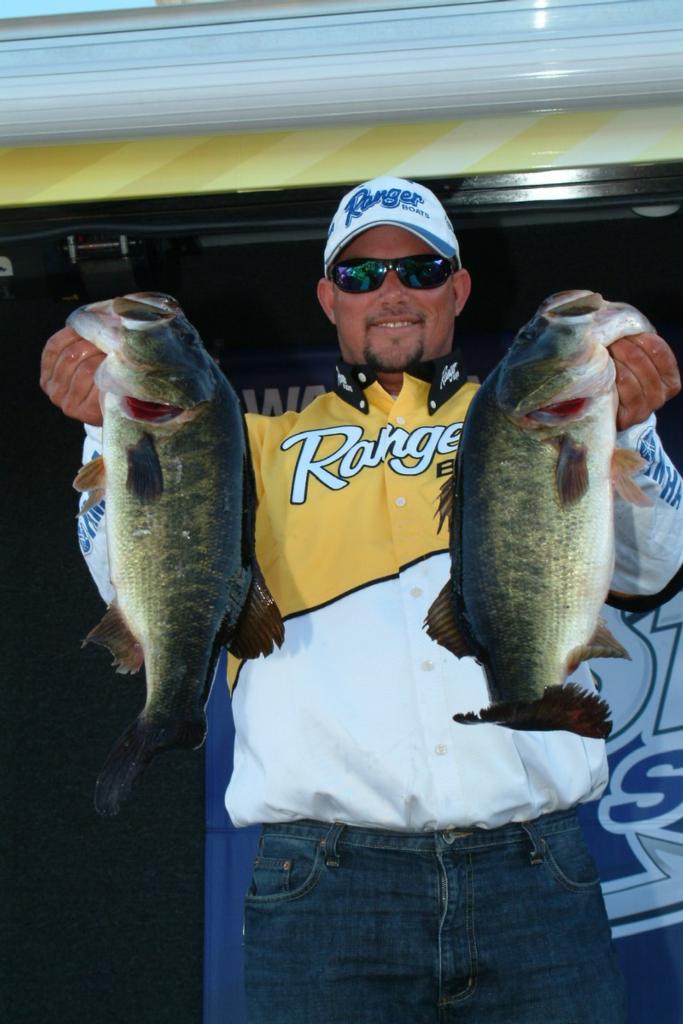 OKEECHOBEE, Fla. – When the going gets tough on Lake Okeechobee, the locals get going.

After the top-10 cut was made this afternoon at the Southeast Stren Series on Lake Okeechobee, many of the names that did not have an “FL.” designation in their address were left on the outside looking in.

Only two pros, Bryan Thrift of North Carolina and Ronald Brown of South Carolina, were left in a top-10 field full of Floridians, most of which live within 100 miles of the Big O.

Leading the way is Bobby Lane of Lakeland, Fla., with 17 pounds, 11 ounces.

Lane is fishing Moonshine Bay, one of the most popular areas on the lake. In order to beat the fishing pressure, he’s pitching into the thick stuff.

“The fish are there, it’s just a matter of getting them out,” he said. “I’ve lost key fish everyday, including today, but this stuff is so thick, the fish really have the upper hand.”

Tomorrow, Lane’s game plan remains torn between flipping all day, or securing an early limit on a spinnerbait first.

“Each day I’ve caught a little limit early and then culled them out flipping,” he said. “So part of me just wants to start with that flipping stick in my hand; more time flipping betters my chances of landing a big one. But with a two-pound lead, I’d hate to swing for the fences tomorrow and come up short by a 12-inch fish that I could have caught on a spinnerbait.”

“I’m ready to win one these darn things,” Lane added. “I was seventh two years ago and fifth last year. I’m ready to close the deal and I don’t want to do anything stupid that will cost me.”

McMillan experienced both sides of the luck coin today. The good luck side happened when he started on his usual Rat-L-Trap hole to get a quick limit of small fish and found that some bigger fish had moved into the area.

“The bigger ones bit the Rat-L-Trap better today, I guess because of the wind,” McMillan said. “But when I was running to my flipping spot to upgrade, like I’ve done the last couple days, I hit a floating log that tore up my motor.”

At that point McMillan decided to play it safe and return to the Kissimmee River, close to check in.

“I never went to my bigger flipping fish, so I was pretty fortunate to catch that good weight on the trap.”

While the top-three positions on the leader board have shifted around over the last three days, Bryan Thrift of Shelby, N.C., refuses to give up his third-place spot. He caught an 8-pound, 6-ounce bass today that anchored his stringer of 14 pounds, 2 ounces.

Thrift continued to throw his unique Chatterblade lure, a swimming jig with a blade on the front, in gold and white colors, to amass his catch.

“It’s an early morning bite,” he said. “All my big fish this week have come in the first hour. This morning, I caught that 8-6, and as I was putting it in the well, my partner caught an 8-pounder. Then it was over. I just have not been able to get a big bite later in the day.”

No surprise here, Bowen caught all of his fish flipping.

“The fish were biting really funny and I missed quite a few,” Bowen said. “I’m not sure why, but they were not thumping the bait like they normally do. I’d set the hook and there would be nothing there. I think the wind might have a lot to do with it.”

Bowen is fishing a very remote area that is difficult to get into.

“The trails leading back into this place are barely fit for an air boat, much less an outboard,” he said. “If I get stuck going in or out, I could be there for a while. But everything worked out fine today.”

Roger Crafton of Boca Grande, Fla., moved up to this best position of the week, fifth, with 13 pounds, 8 ounces.

Crafton has been working the Moonshine Bay area along with many other boats, but has managed to out fish the pressure.

“It’s all about getting the big bite in there,” Crafton said. “There are a lot of fish in the area and it’s full of beautiful, open water with cattail clumps. I’ve been fishing a lot of different ways, but the better bites are coming flipping the thick stuff – they’re just few and far between.”

Rounding out the top-10 pros in the Southeast Stren Series on Lake Okeechobee:

In the Co-angler Division, Mark Linn of Sarasota, Fla., leads with 12 pounds, 12 ounces.

The bulk of Linn’s weight came in the form of an 8-pound bass he caught while fishing with pro Bryan Thrift.

“Bryan had just caught this behemoth 8- or 9-pounder,” Linn recounted. “I was thinking how awesome it would be to catch one like that right off the bat, and the very next cast – boom – it hit my spinnerbait. It was my first fish of the day.”

Behind Linn, by just two ounces, is Mike Goodman of Nebo, N.C., in second with 12 pounds, 10 ounces.

And look out, fellows. Just 9 ounces off the lead is well-known co-angler Judy Israel of Clewiston, Fla., in third with 12 pounds, 3 ounces. She’s a previous FLW Tour co-angler winner and she’s dangerous on Okeechobee.

Dennis Andersen of Wellington, Fla., is in fourth with 8 pounds, 12 ounces.

Keith Carson of Debary, Fla., is in fifth place with 8 pounds, 12 ounces.

Rounding out the top-10 co-anglers in the Southeast Stren Series on Lake Okeechobee:

The final day of competition begins tomorrow a 7:30 a.m. at Okee-Tantie Park.