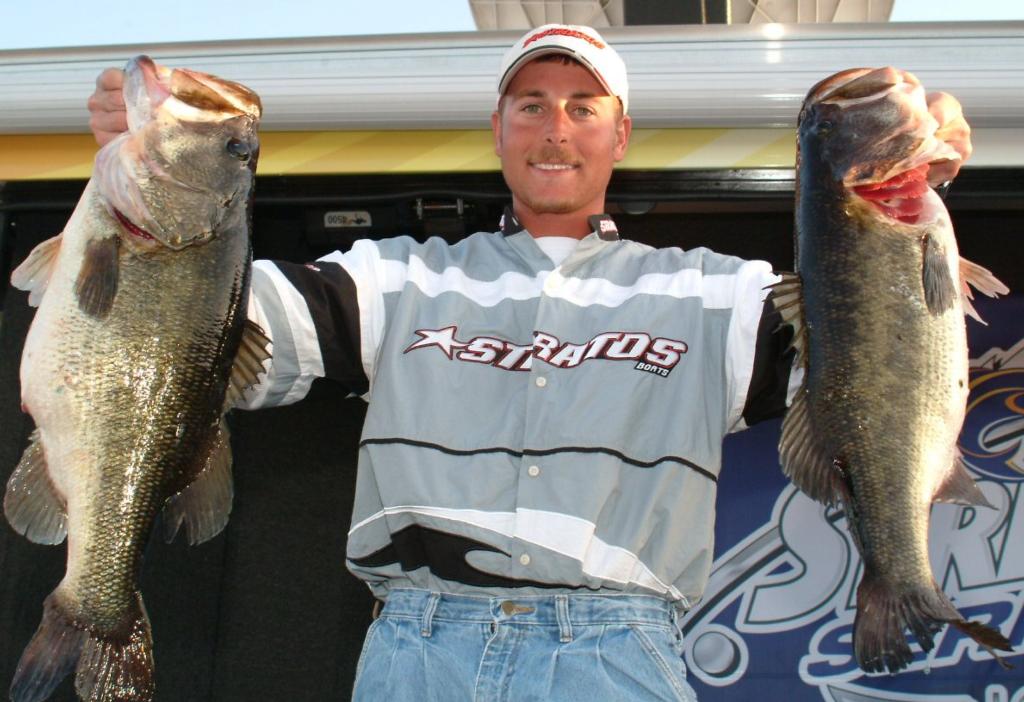 Then he went to the next Stren Series (formerly EverStart Series) Southeast Division event on Santee Cooper in March and won it.

Thrift traveled to the third event of the season at Lake Eufaula and won again, collecting unprecedented back-to-back co-angler wins in the Stren Series.

He finished the season with a 69th-place finish at West Point and a second in the Southeast points race; Thrift decided it was time to step up to the pro side in 2006.

Today, on the Stren Series stage in the Wal-Mart parking lot, Bryan Thrift, fishing his first event as a pro, found himself locked up squarely between the local Lane brothers – Bobby and Arnie.

Arnie Lane had just weighed in an impressive 16 pounds, 14 ounces to take the lead.

Whispers among locals in the crowd indicated that Bobby Lane had a big sack, too. It looked to be a showdown between the Lane brothers.

But not before a shy Thrift took the stage and dropped 22 pounds, 7 ounces on the scales, anchored by two giant bass, both in the 8- to 9-pound class.

Thrift knocked Arnie off the lead, and then Bobby mounted a crowd-rousing charge with 18 pounds, 9 ounces – but it wasn’t enough. Bobby Lane came up just 5 ounces short of his first Stren Series win and Thrift won his third Stren Series title in just five tournaments.

For the record, Thrift amassed a two-day total of 36 pounds, 9 ounces for the win.

“I must be nervous or cold, because I can’t quit shaking,” Thrift told the crowd with a trembling voice after he was declared the winner. “I can’t believe this is happening.”

For four days, Thrift fished a 3/8-ounce Chatterbait (made by Rad Lures in South Carolina) in various colors in the Moonshine Bay area of Okeechobee. He fished the bait on 30-pound-test braided line.

Thrift targeted a mix of hydrilla and reeds with the unique swimming jig that features a bill-like blade in the front, which produces an erratic action.

“The best places were where the reed line and hydrilla created a seam,” Thrift explained. “There were holes and gaps in the hydrilla where it met the reeds, and that’s where all my big bites came from. I’d swim the Chatterbait over the holes, kind of slow-rolling it, ripping it and pausing it over each hole – that’s when the big ones would crush it.”

Thrift also noted that all his big fish came first thing in the morning each day.

“The big-fish bite was definitely early,” he said. “Last night, I told my friends that if I didn’t have a big one by 8:30, it would be over for me.”

“By nine o’ clock, I thought I was toast,” he said. “Then I made a little move across the bay and caught both of my big ones within 10 minutes – those were my first two fish.”

Thrift collected a fully rigged Ranger Boat plus $10,000 for his win. Needless to say, it looks like FLW Outdoors has a new fishing phenom on its hands.

Thrift’s win was Bobby Lane’s dagger in the heart. After starting the day with a 2-

pound lead, Lane had one of those flawless fishing days where everything comes together perfectly and points toward a win.

“I thought it was my day, I really did,” lamented Lane, who had a two-day total of 36 pounds, 4 ounces. “I’m happy for Bryan – that was an incredible stringer of fish. The frustrating part is not knowing what I could have done different.”

Lane fished in the Moonshine Bay area and caught most of the fish he weighed on Berkley Bungee Hogs, Sweet Beavers and Gambler B.B. Crickets. He flipped and pitched all the plastics on 20-pound-test Vanish and 65-pound-test SpiderWire with 1 1/2-ounce Tru-Tungsten weights.

“When I flipped the thick, matted stuff, I used the 1 1/2-ounce weight, SpiderWire and the Crickets and Beavers,” he said. “When I fished the isolated clumps, I made casts and long pitches with a lighter 3/8-ounce weight and Bungee Hog on the Vanish Fluorocarbon.”

Arnie snuck up through the standings in Bobby’s shadow this week and almost put a love-you-like-a-brother whooping on him at the very last minute.

“I flipped a Gambler Ugly Otter under a 1-ouce Bass Pro XPS Tungsten weight in the mats,” he said. “And I cast a 7-inch Gambler ribbon-tail worm to the isolated cattails.”

“The real key for me was the isolated stuff,” he added. “The more isolated a mat or clump of cattails, the better.”

After hitting a floating log and damaging his outboard motor Friday, Jimmy McMillan

of Belle Glade, Fla., was forced to borrow a boat for today’s competition.

But McMillan’s motor woes were not over as he had motor trouble again today, which cost him a majority of his fishing time.

“We only got to fish about two and a half hours today,” McMillan said. “I would have liked to try my flipping places for an hour or two today, but given all the motor trouble, I’m happy to have what I caught.”

Despite the complications, McMillan managed to catch 10 pounds, 4 ounces today for a two-day total of 25 pounds, 14 ounces worth $8,000.

“I was fishing around cattail clumps,” he said. “It was basically a reaction bite. I’d cast past a clump and try to rip the bait into the clump to get the fish to react on it.”

McMillan also extended a personal thanks to fellow competitor and friend Carmen Patti (fifth) who gave McMillan and his co-angler a ride back in today.

“Carmen spent a lot of his valuable tournament time helping us out, and I can’t thank him enough for that,” he added.

Rounding out the top 10 pros in the first Stren Series Southeast event of the season: