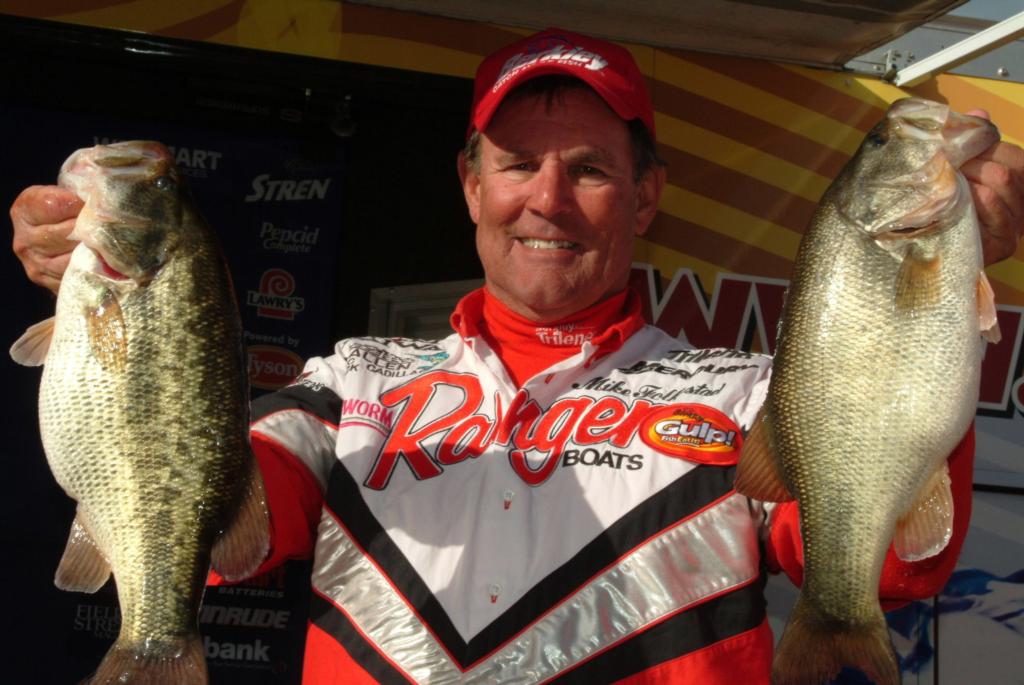 LAKEPORT, Calif. – It was an eventful day on Clear Lake, to say the least. After a relatively tame opening day of Stren Series competition Wednesday, bass-fishing fans were rewarded with a number of compelling and dramatic storylines during Thursday’s weigh-in.

For starters, a California co-angler came within 5 ounces of setting the all-time record for the largest fish ever caught in a Stren Series event. Then an excitable rookie from Idaho fishing the very first Stren tournament of his career grabbed the overall lead in the Co-angler Division. That was followed up by a runaway train posing as a pro bass angler in the form of Mike Folkestad. When all was said and done, the native of Yorba Linda, Calif., bludgeoned the rest of the field, finishing a full 8 pounds ahead of his nearest pro competitor.

To top things off, pros and co-anglers combined to bring in over 3,886 pounds of fish to the scales as well as 285 five-fish limits. Oh, and by the way, when the top-20 cut was announced, pros needed a full 31 pounds just to survive and fish another day.

After capturing the lead in yesterday’s competition, Folkestad stated that his goal was to simply catch a 10-pound bag today and qualify for the cut. Well, to the dismay of his rivals, Folkestad decided instead to bring an 18-pound, 15-ounce stringer to the scales and serve notice to the rest of the field.

“I’m ready to go fishing tomorrow,” said Folkestad. “It’s been awfully good fishing for me, but I’m kind of getting worried that it’s too good and that it’s got to end sometime soon. But I didn’t fish anywhere today that I’d ever been to before, so I’ve been able to save all of my good spots. I’m kind of on a roll. We’ll just see what happens tomorrow.”

Folkestad, who won the Stren Series Western Division Angler of the Year award in 2004, said he continued targeting deep-water breaks with a variety of Roboworms including his namesake bait, the Folkestad Special. However, he also acknowledged that, as good as his career has been, he still longs to capture his first Stren Series title.

“I’ve accomplished a lot of things in fishing over the years, but I’ve never been able to win one of these,” Folkestad said. “I’ve finished second, but it’d be really nice to finally finish in first place here.” 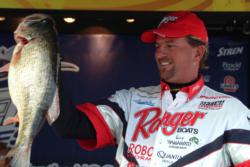 Using a 20-pound, 5-ounce stringer in today’s competition, Jimmy Reese of Witter Springs, Calif., leapfrogged from a tie for 16th place into second heading into tomorrow’s semifinal round of competition. Reese ended with a two-day total of 37 pounds, 3 ounces and also snagged the day’s big-bass award in the Pro Division after netting a 9-pound, 11-ounce largemouth. 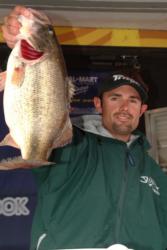 William McAninch of Sylmar, Calif., finished in fifth place with a two-day catch of 36 pounds, 3 ounces.

Rounding out the top 10 pro semifinalists at the Stren Series Clear Lake event:

Perhaps the most enthusiastic angler in the entire Clear Lake event is a little-known fisherman from Horseshoe Bend, Idaho, who goes by the name of Brett Baldwin. After finishing third in yesterday’s co-angler competition, Baldwin made sure that he would grab some headlines of his own Thursday after turning in a duly impressive two-day catch of 31 pounds, 2 ounces – which just so happens to be more weight than 180 pro anglers managed to catch at the very same event. 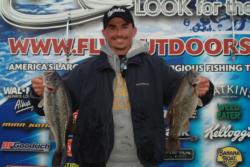 “This is the most exciting feeling that I’ve ever had,” Baldwin said. “This is my very first Stren event, and this has been one of the main goals of my life – to be in a big-time bass tournament and do well. It’s a dream come true.”

Baldwin said that he owes a good part of his success to the lessons he’s learned fishing the frigid waters of Idaho.

“Basically, I’m fishing my own pattern that I brought with me from Idaho,” he said. “I put together everything I know about cold-weather bass fishing in Idaho, and I patterned it on this lake. The key is to fish as slowly as you can. You’ve got to get that bait in front of their face without startling them that much. It doesn’t matter what depth you’re at or what you’re doing, you’ve got to fish slowly.”

Baldwin, who said he’s dedicated this tournament to his parents, said his goals are simple: to do well and have fun.

“My goal coming in here was to just make the top 20 and prove to myself that I know how to fish the way I know I can,” he said. “Like I said, it’s a dream come true.” 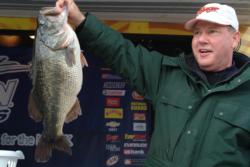 When California native Terry Stark hit the water for today’s competition, he never dreamed that he’d return to weigh-in with the most dramatic story of the day – or of his bass-fishing career for that matter. But that’s exactly what happened.

“It was literally the last cast of the day. My pro had already put down his rod, and we’re ready to go back in. But I wanted to make one more cast,” Stark said. “I was using a purple Roboworm, I cast out and then it hit. The rod doubled over. I knew it was over 10 pounds right away. It was wild. It blew my mind.”

For the next five minutes, Stark battled the fish of a lifetime. It jumped out of the water twice and made two huge runs. But Stark stayed with it all along.

“We got it to the boat, and my pro missed netting it the first time around,” Stark said. “I was shaking the whole time. But then we finally netted it. It was the biggest largemouth I’ve ever caught in my life.”

When it was finally brought to the scales, the fish weighed in at a whopping 12 pounds, 7 ounces. And as it turned out, Stark’s prized possession was the third-largest fish caught of all time in any Stren Series event – losing out only to Jeary Wheeler’s record 12-pound, 11-ounce largemouth caught in a 2003 Stren Series event at Sam Rayburn and Bernie Gaunt’s 12-pound, 9-ounce largemouth caught in 2004 on the California Delta. Stark’s monster also currently stands as the fifth-largest bass ever weighed in across all FLW Outdoors events.

Rounding out the top 10 co-angler qualifiers at the Stren Series Clear Lake event: