On a roll at Shasta 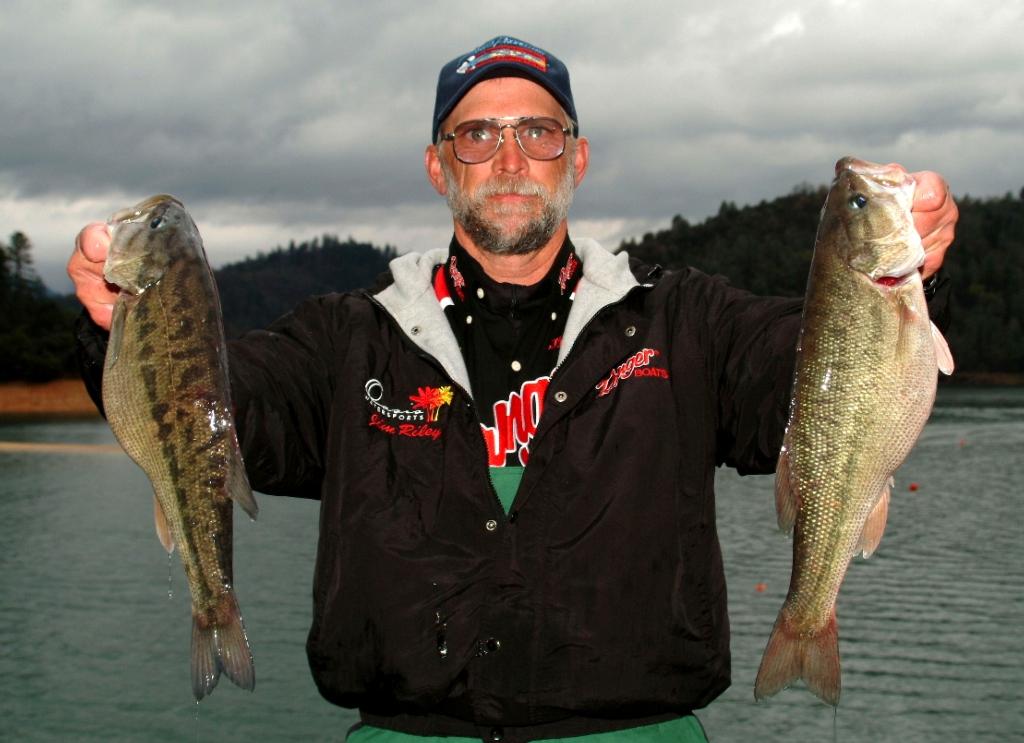 Pro Jim Riley of Shasta Lake, Calif., hooked into one of the day’s best stringers – 14 pounds even – and dominated the opening round with a two-day total of 31-1. Photo by Jeff Schroeder. Angler: Jim Riley.
March 30, 2006 • Jeff Schroeder • Toyota Series

REDDING, Calif. – Once again, the five-bass limits piled up in Stren Series Western Division competition at prolific Lake Shasta, and once again, Jim Riley emerged at the top of the heap. The local pro from Shasta Lake, Calif., hooked into one of the day’s best stringers – 14 pounds even – and dominated the opening round with a two-day total of 31-1.

But the story is the limit count. The pros weighed in 182 of them Thursday while the co-anglers notched up 160. In two days of fishing, Lake Shasta has coughed up an astounding total of 691 limits out of a possible 772 available to the Stren Series field, setting a new FLW Outdoors record.

With so many fish, it takes a little extra something to come out ahead of the pack. With Riley, a local angler, that something could very likely be his extensive knowledge of the lake. He amassed a more than 6-pound lead over the rest of the field in the opening round.

“I don’t think I stopped at any spot where I didn’t catch fish today,” he said. “The thing is, I laid off all of my good stuff.”

While he avoided his “good stuff,” that didn’t prevent Riley from catching a few good fish. The blustery weather continued at Shasta Thursday, which kept the spotted-bass bite turned on. While the wind and rain might have made for some physically miserable conditions in which to fish, doubtless few competitors noticed it much as they reeled in spot after spot.

“If it keeps up the way it’s been, I think I can keep doing what I’m doing,” said Riley, who said he threw plastics all day, avoiding the swimbait. “Today, I just went prefishing. I probably found eight new spots where I should be able to catch some good fish.”

And with such a strong first half, can Riley keep rolling in the face of all those limits and win his first Stren event?

“Lord willing, it’s a possibility. But there are a lot of good sticks outs here,” he said. “It could all blow up on me tomorrow. If a big swimbait bites breaks out, somebody could come out of here with 20 pounds.” 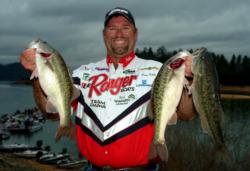 “Normally, I’m a guy that always prays for foul weather,” said Dobyns, who has an enviable track record in tough fishing conditions. “But right now I’d take sunshine in a heartbeat.”

Despite the uncooperative weather, the pro from Yuba City, Calif., also pounded out a 14-pound limit Thursday and grabbed the second qualifying spot with a two-day total of 25-0.

“The fish just moved up, and you pretty much just have to stop there when they’re there,” Dobyns said. “I basically have one area where I’m just waiting them out. When you’re dealing with spots, they’re just so in and out, up and down. They love to suspend, so you have to be there at the right time.”

Dobyns said he caught fish on swimbaits, ripbaits and spinnerbaits Thursday, but added that it was somewhat of a chore – which, at prolific Lake Shasta, is a relative description.

“Actually, this has been my best tournament lake until the last few years,” he said. “I’ve just been having a hard time. The fish haven’t been eating reaction baits very well the last few years. These spots will more than bloody your nose. This one is anyone’s ballgame.” 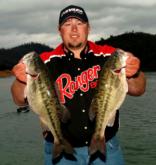 Mark Meddock of Woodland, Calif., earned the third pro qualifying spot with an opening-round total of 24 pounds, 4 ounces. He caught the heaviest limit of the day Thursday, 15-4.

“I caught them all on swimbaits,” he said. “If we get good weather, I think I can catch them again tomorrow.”

The veteran is using an obsolete Sportsman’s Superfloat worm to catch his fish this week, plus a darthead with a stinger hook in the back end.

“If I wasn’t using that, I wouldn’t have caught 40 percent of the fish that I catch,” Nollar said. “These spots like to come up and just bite the end of the tail.”

Gene Gray of Atascadero, Calif., placed fifth for the pros with a weight total of 23 pounds even.

“I probably caught 10 fish today. I only culled twice, though,” he said. “The area I’m saving, the fish do move around some, but they move around to feed. I’m just fishing really slow and deep.” 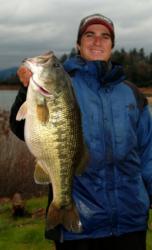 The top 20 pros made the cut into the two-day final round starting Friday. The cut weight settled at 20 pounds, 3 ounces.

While most of the fish caught by the leaders were in the 2- to 4-pound variety of spotted bass, pro Justin Kerr of Simi Valley, Calif., caught a jaw-dropping 8-pound, 7-ounce largemouth to win the $700 Snickers Big Bass award. He hooked it on an Optimum swimbait.

While a standout catch, Kerr’s fish, agonizingly, wasn’t enough to help him overcome the 3-ounce deficit by which he missed the cut. He finished in 21st place.

Justin Regelin of Anderson, Calif., leads the Co-angler Division with a two-day total of 18 pounds, 15 ounces.

“I’ve been throwing a Senko all week, from the bank to 60 feet of water,” he said. “I just rig it differently for the different depths.”

Glover also earned $240 for the Snickers Big Bass award in the Co-angler Division thanks to a 7-pound, 8-ounce largemouth.

The top 20 co-anglers – each of whom also caught limits both days of the opening round – advance into the next round. The co-angler cut weight settled at 15 pounds, 13 ounces.

Day three of Western Division competition at Lake Shasta begins as the semifinal-round field of 20 boats takes off from Bridge Bay Marina at 6:30 a.m. Pacific time. Anglers’ weights are reset to zero for Friday, and winners in both fields are determined by the heaviest accumulated weight over the next two days.