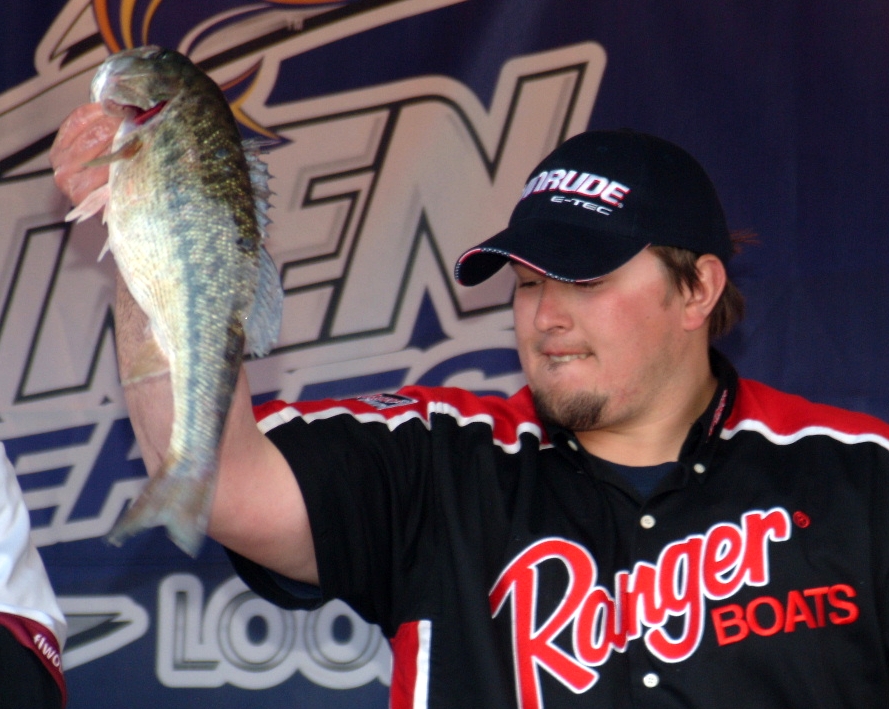 REDDING, Calif. – Mark Meddock led a youth movement at Lake Shasta this week that showed off guile in the face of adversity, pitted bravado against experience and, above all, proved that swimbaits are the hottest bait out West.

In Saturday’s final round of Stren Series Western Division competition at Shasta, the 23-year-old pro from Woodland, Calif., caught the heaviest limit of the week – 22 pounds, 14 ounces – totaled 40-9 over the last two days and won $10,000 plus a new Ranger 519 VX for first place.

“I feel great, man,” said Meddock. “This is the biggest win of my career.”

Three factors played key roles in the young pro’s victory: the weather, his strategy and his bait.

All week long, Meddock was quietly crowing about how well the prespawn spotted bass in Lake Shasta were biting thanks to the unseemly weather. The clouds, wind and incessant rain only picked up steam as the week wore on, and – while creating dismal conditions for outdoor fun like fishing – that only turned on the bass bite even more.

“This lake is just unreal right now. All of these big spotted bass are coming up and eating,” he said. “I’ve probably caught 20 bass over 5 pounds during the last week, and that’s unbelievable.” 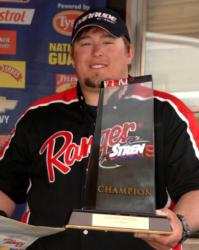 What’s especially unbelievable is that all of those 5-pound-plus bass were spots. Saturday, Meddock came in with a kicker spotted bass weighing about 6 1/2 pounds, which he caught early in the day. He filled out his limit with two more in the 4- to 5-pound range and another one that went over 5. He said, with those fish in the livewell by 8 a.m., he spent the day trying to cull out his smallest spotted bass, which was still a sizable 3 1/2 pounds.

He didn’t ultimately get to cull it out, but he didn’t need to.

“I was saving those fish all week,” he said. “I didn’t think anybody else would find them because they were suspended over about a hundred feet of water. I was fishing up in the Sacramento (River) Arm and at the mouth of Pit River. I was just hitting the tops of islands, and if they didn’t eat within the first three of four casts, I’d just move on to the next stop.”

Meddock said he had about 10 locations where his big spots would bite and replenish themselves each day. He saved his best spot up the Sacramento Arm, however, for Saturday.

While those fish were, in fact, there for the taking for everyone, Meddock believes it was his bait that did the trick in getting them to bite. He said he caught all of his fish this week on an 8-inch Huddleston swimbait. He, along with runner-up Jeff Michels, came in with their swimbaits blazing the last two days to take over the final round from the worm anglers.

“It’s a custom color, and that’s the reason it’s getting bit,” said Meddock, who was initially reluctant to reveal the bait’s “rainbow trout” color. “A lot of people throw the Huddleston here and they don’t get bit, but that color is key for me. I would just cast it out and slow-roll or twitch it. It runs about 10 to 20 feet deep.”

You would think that, if you caught the second-heaviest limit of the entire week while leading on the final day of a tournament, it’s a pretty good bet you’d win.

Not so for Michels. The day-three pro leader from nearby Lakehead, Calif., caught 19 pounds, 10 ounces Saturday and finished second thanks to Meddock’s massive, near-23-pound stringer. Michels, who led Meddock by under a pound coming into the day, finished with 38-1 and claimed $10,000 for second place.

“I thought I had it, I really did,” Michels said. “Mark and I were fishing right next to each other on that last stop. With almost a 1-pound lead on him, I didn’t think he had anything over 21 pounds. But I’m extraordinarily impressed. On the fourth day, for him to find that quality of fish – he’s a great fisherman.”

Michels used a similar sandbagging strategy as Meddock. He made the cut by catching fish on Senkos then turned to Mission Fish swimbaits Friday and Saturday, making milk runs up and down the Sacramento and McCloud river arms of the lake. 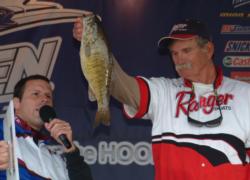 While the young guns blazed away with their swimbaits into first and second place, veteran pro Dave Nollar of Redlands, Calif., finished third and won $8,900 by twitching 30-year-old stinger-rigged plastic worms on darthead jigs.

Nollar caught 18 pounds, 7 ounces – which tied Michels day-three weight as third-heaviest of the week on the pro side – and finished with 36-8.

“I’ve fished for a lot of years, but I’ve never had more fun than I had in the last two days. It was just awesome,” he said.

Bill Townsend of Redding landed a hefty kicker spotted bass Saturday, weighed in a limit worth 13 pounds, 13 ounces and finished fourth with a final weight of 26-6. He earned $7,900.

“I started out on swimbaits. I was just throwing it out into deep water and reeling it in,” he said. “Then I went to Yum Dingers in green-pumpkin with purple flake and Woolly Buggers in the same color as my backup pattern.”

After a disappointing Friday, opening-round pro leader Jim Riley of Shasta Lake, Calif., climbed back into the fifth slot with a 13-pound, 1-ounce limit. He finished the finals with 23-15 and earned $7,400.

“It was a pretty good day. I lost one good fish and another one on a swimbait,” said Riley, who caught his non-swimbait fish on Yum Dingers rigged on dartheads.

Rounding out the top 10 Pro Division finishers at Lake Shasta:

All of the top 10 pro finishers caught limits both days of the final round.

With first-, second- and 14th-place finishes after the first three events, Jimmy Reese of Witter Springs, Calif., has a pretty good lead in the Western Division pro standings with 583 points. William McAninch of Sylmar, Calif., is second with 561 points.

The next Stren Series event is a Southeast Division contest at Santee Cooper lakes near Manning, S.C., April 19-22.

The next Western Division tournament is the fourth and final event of the season. It will be held at the California Delta near Bethel Island, Calif., May 3-6.