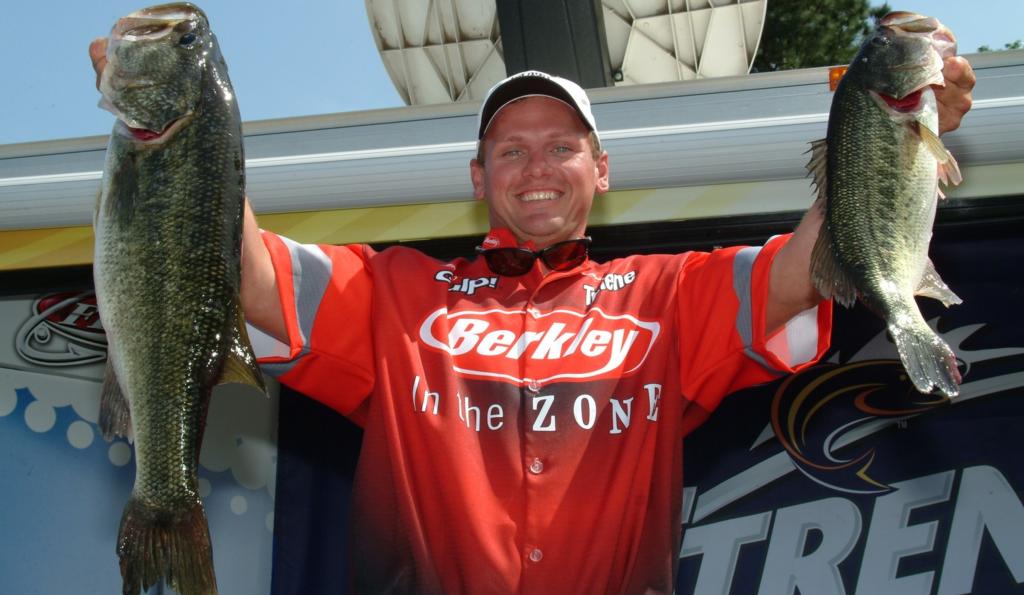 MANNING, S.C. – The sun burned brightly in the South Carolina sky Thursday, but to anglers’ dismay, the catch rate fell off at the Stren Series Southeastern on Santee Cooper.

After yesterday’s decent haul in the clouds and rain, the sunshine that every one wanted brought fewer limits, much fewer big fish and only three bags that topped the 20-pound mark.

One of those 20-pound strings belonged to Ron Klys of Gainesville, Fla., who brought in five bass for 20 pounds, 1 ounce to take the lead with a two-day total of 36 pounds, 4 ounces.

Klys also brought the word of the day back to the bank describing his pattern: fry guarders.

Once bass eggs hatch, the tiny fry often gather up in tight balls and are guarded from predators by their parents. Typically, catching bass which are guarding fry can be tough, but at times they will attack anything that threatens their young.

“I caught about half my fish off the bed and about half guarding fry,” Klys said. “My big bonus of the day was catching a 4-pound buck and a 7-11 female off the same bed.”

Klys revealed that he is using a Berkley Gulp Sinking Minnow on his bedding fish, and the fry guarders fell for a Berkley Power Bait 5-inch Jerk Shad.

“I had to be persistent to catch the guarders,” Klys detailed. “I’d cast it into the balls of fry and twitch it through them aggressively, and the bass would bite out of reaction.”

Everything according to plan for Ellis

Well-known local pro Ken Ellis of Bowman, S.C., is in second with

Ellis continued to work his pattern of Senkos fished around key cypress trees and stumps in both Marion and Moultrie lakes today.

“I probably caught one I shouldn’t have,” Ellis said, referring to catching a little more than needed to stay in the cut. “I should have saved it for the finals, but you have to make the cut before you can win.”

Ellis noted that some of his fish are bedding on stumps and some are postspawn fish coming out to hang around the base of cypress trees.

“The more fish that come off bed, the better off I’ll be,” he remarked. “I never re-fished any of the water I fished yesterday. I wanted to let it rest and replenish. But I’ll probably start revisiting some of that water tomorrow.”

Also, as a harbinger of things to come, Ellis noted that he shook two bites off late this afternoon.

“I don’t know how big they were, but hopefully I’m going to find out tomorrow.”

Armour, who has two previous Stren Series top-10s on Santee, is mixing bed-fishing and fry-guarding patterns on Lake Marion.

“I caught three bass off one bed, two fish that were just cruising and two that were guarding fry,” Armour said, summing up his day. “The funny thing about this lake is that the fish come in and out so fast. I only caught four yesterday, and I caught all my fish in that same place today, but they were all new fish that were not there yesterday.”

Armour’s last top-10 at Santee was a seventh-place finish when he placed behind winner Ken Ellis.

“Hopefully some more fish will move into my areas, but I can’t catch the kind of fish Ken catches here,” Armour said. “He’ll be tough to beat here over the next couple of days. He just knows the lake so well, and he knows where to catch those 22- to 25-pound bags.”

fourth place with a two-day total of 36 pounds.

She continued to blind-cast to bedding and postspawn fish in Lake Moultrie.

“Even with the sun, I couldn’t really see the beds too well today, because the water clarity where I’m fishing is not real great,” she said. “I can see down about 2 feet, and the bottom is probably 4 feet plus.”

Opel’s overall strategy is to work a different area each day. She fished one area yesterday, a completely different area today and will move on to a new area tomorrow.

“I try to catch all I can from each one and then move on,” she said. “I still have a couple of more areas left that I found in practice but have not been back to in the tournament.”

Like some of the other leaders, Vinson keyed on both bedding fish and fry guarders today. His biggest fish each day, both in the 7-pound class, have come off bed.

“They’re doing a little bit of everything in this little place I found in practice,” Vinson said. “Some are moving in, some are spawning, some are moving out and some are guarding fry. I’m trying to save the spawners for the finals, and I caught a couple guarding fry today. But they move in, spawn and move out so quickly here that I don’t know if the ones I found today are going to hold. If they do, I should be all right tomorrow.”

Rounding out the top 10 pros at the Stren Series at Santee Cooper:

onto his lead in the Co-angler Division by catching a 4-pound, 2-ounce bass today for a two-day total of 23 pounds, 8 ounces.

Yesterday, Pickett caught an 8-pound, 15-ounce bass, but was bumped from the Co-angler Division big-bass award by 1 ounce by Tony Cook’s 9-pounder.

Pickett, however, remained determined to collect some big-bass money, and today he nailed the biggest bass in the Co-angler Division, weighing 6 pounds, 1 ounce. He collected $230 for his big-bass redemption.

Tony Cook of Summerville, S.C., is in third place with a two-day total of 17 pounds, 8 ounces.

Nathan Fuller of Hillsboro, Ga., is in fourth place with a two-day total of 16 pounds, 7 ounces.

Angelo Koundourakis of Bainbridge, Ga., is in fifth place with a two-day total of 16 pounds, 2 ounces.

Rounding out the top 10 in the Co-angler Division at the Stren Series at Santee Cooper: