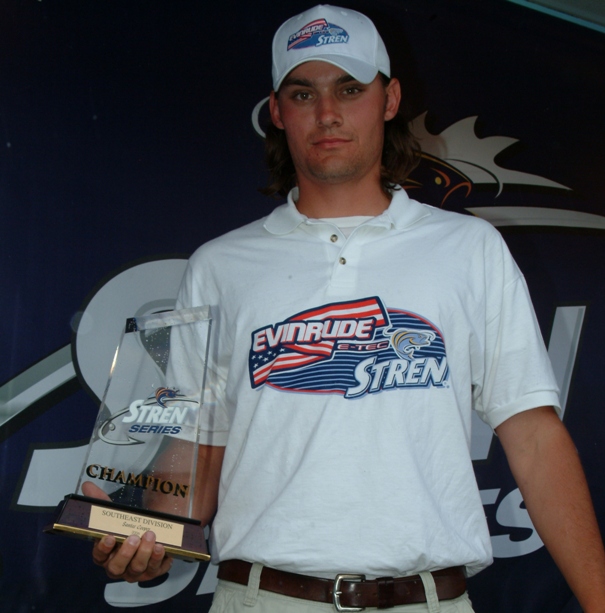 MANNING, S.C. – Just two months ago at the Stren Series event on West Point Lake, Nathan Fuller of Hillsboro, Ga., won the Co-angler Division title, taking home $5,000 and a Ranger boat. It must have been deja vu Saturday as Fuller claimed his second co-angler win of the season at the Stren Series Southeast on Santee Cooper.

“I knew it was possible,” Fuller said. “Bryan Thrift proved that last year by winning two in one season, so I knew it could be done.”

Fuller, who has now collected $10,000 and two Ranger boats in a period of two months

says he his putting the money in a savings account to help finance his efforts next year as a pro in the Stren Series.

As far as the fishing goes, Fuller cast a watermelon-red Senko tied to 10-pound-test fluorocarbon behind pros Lisa Opel on Friday and Roger Crafton today to catch three fish each day for a two-day total of 14 pounds, 12 ounces.

“I did bed-fish the first two days,” he said. “But the last two days I got fortunate in drawing pros that were doing more blind-casting than sight-fishing.”

After leading for three days in a row, Joseph Ellis of Cincinnati finished second with a two-day total of 11 pounds, 6 ounces.

“I knew going out this morning that it was going to take three good fish to win today,” Ellis said. “I only got one bite, and that was it. But I needed a good tournament to rejuvenate me, and this did it; I’m ready to go next year.”

Hults’ finish boosted his standings to win the Co-angler Division points title in the Stren Series Southeast Division with 734 points.

Rounding out the top 10 co-anglers in the Stren Series event on Santee Cooper: