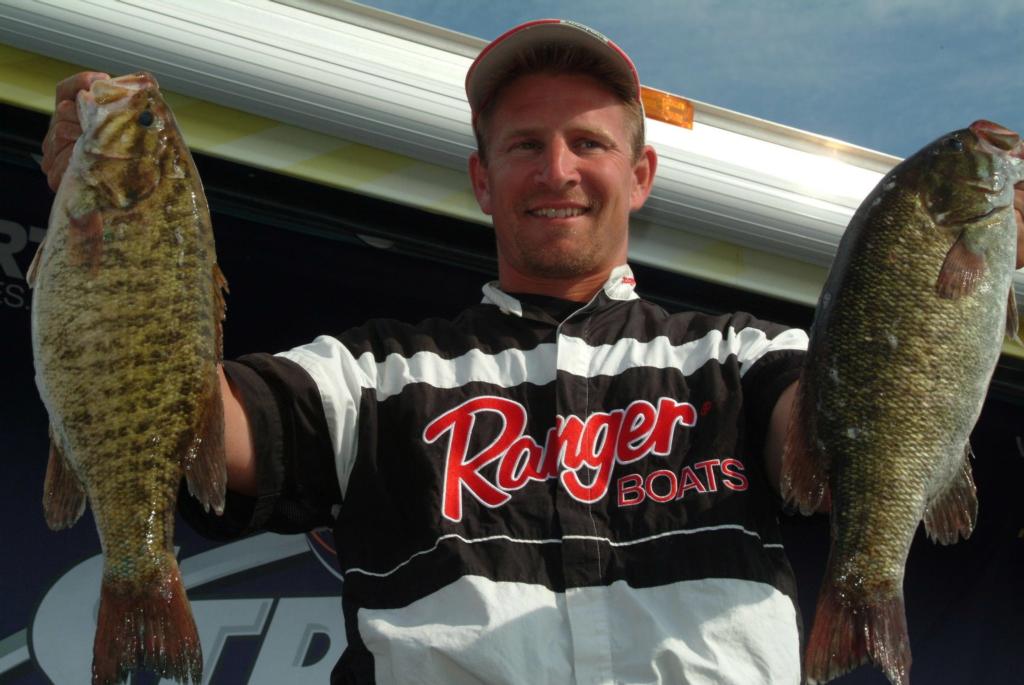 CLEVELAND – After another head-scratching day of tournament action, co-angler Jay Garrard of Durham, N.C., seemed to be one the few people out there to accurately capture the true picture of this week’s Stren Series Northeast Division event.

“Lake Erie,” the young man said, “can be merciless.”

If there was any question before that the Great Lakes could wreak havoc on a fishing tournament, there was little doubt to the veracity of that statement after Friday’s weigh-in. Just ask pro Bryan Coates. After leading the entire pro field on day one with an outstanding catch of 24 pounds, 10 ounces, Coates not only failed to make the top-20 cut on the second day, but he also failed to bring even one fish to the scales. The end result – Coates 0, Lake Erie 1.

Still not a believer? Then go ask pro Gerald Beck from Lexington, N.C. Beck, one of the clear frontrunners who was sailing along with the largest two-day stringer of the entire tournament at 40 pounds, hit a major speed bump on day three, landing only 6 pounds, 13 ounces, and was summarily bounced from the tournament.

How about co-angler Gary Guilliams of Troutville, Va.? Guilliams not only landed the second-largest stringer on the entire first day of competition as a co-angler, mind you, but he also qualified for the semifinals in first place after landing a two-day stringer totaling a whopping 39 pounds, 10 ounces – a full 7 pounds heavier than his next closest competitor. So what happened to Guilliams today? You guessed it. He caught one fish and was sent packing.

Not convinced yet about the fickle nature of Lake Erie? Well let’s hear co-angler Stephen Semelsberger Jr. tell his story about what happened on the water today.

“Everything that could go wrong did go wrong,” said Semelsberger. “First our rub rail came off, then our GPS unit went out, and then our trolling motor broke – and that was just the first 20 minutes of our trip. We had to stop and tie the thing down with a rope, and it took us two hours just to get to our spot. Then, when we decided it was time to return to weigh-in, the boat wouldn’t start because the battery was dead. So we had to jump it. But it took us three times to figure out that if we used anything electronic, the battery would short out again. It was a really rough ride, and we had to keep stopping along the way. I really thought we weren’t going to get back.”

In the end, however, they did get back with four minutes to spare. Oh, and by the way, Semelsberger now leads the tournament in the Co-angler Division by nearly 4 pounds after netting the most improbable 19-pound, 8-ounce sack of the entire tournament.

“We were out on Lake Erie, and the motor mount on our boat snapped,” said Shipton. “We couldn’t do anything but idle to the nearest marina, which happened to be in Canada. Basically, we’re stranded. Our choice was to either take a ferry that wouldn’t get us back until midnight or fly. Charlie stayed with the boat and tried to get a tow, but I decided to fly back. I’ll tell you what: I never planned on being in Canada or riding in an airplane today. It was definitely something else.”

Throw in other quirky events like pro Vic Vatalaro finishing in a tie for second place for the second day in a row, pro Joe Balog losing a crucial 6-pound smallmouth after making a 150-mile roundtrip, and pro Dave Lefebre “borrowing” two indispensable engine mount nuts after a chance encounter with a total stranger five minutes before takeoff, and you have all the makings of one of the zaniest events in Stren Series history.

However, believe it or not, the tournament did go on.

Bishop in control of pro leaderboard

Somehow through it all, Kevin Bishop of Hilton, N.Y., managed to avoid most of the chaos, turning in a stellar 21-pound, 2-ounce sack to take command of the Pro Division heading into Saturday’s all-important finals.

“It’s fantastic to be in the lead right now,” said Bishop. “I caught everything I hooked today, and I’m definitely around the right fish to win this tournament. I’m just really thrilled to have caught what I caught today.”

But Bishop is also well aware that he could easily be on the receiving end of Lake Erie’s wrath come tomorrow’s competition.

“It’s definitely scary,” said Bishop, who holds a 2-pound, 5-ounce lead over his nearest competitor. “There are a lot of great anglers behind me, and even though I have a cushion, it’s not as big as you’d think on this lake. I’m just going to go out there, go fishing and see what happens. If it’s your turn, it’s going to happen. If it’s your turn, you can’t help but win. But if it’s not, it’s not.”

Vatalaro, Balog all tied up 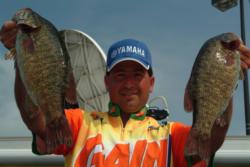 “It was tough out there today,” said Vatalaro. “I drove a long way – it took us three hours to get to our spot – and I really only got two good bites the whole day. I started out fishing my best areas and got nothing, so I’m not sure if they’re ever going to bite. But I still have other spots. So, if everything works out perfectly, I still think I can get a 22-pound bag tomorrow. But we’ll just have to see.” 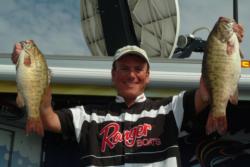 Balog is cautiously optimistic as well.

“I hadn’t lost a fish that really hurt me until today,” said Balog. “It just so happened that it was a 6-pounder that I lost at the worst possible time. I’m making a humungous run, about 150 miles total, so I only have about four hours to fish. But the reason I’m making such a long run is because the fishing is so good. And I’ll tell you, I’m going to try and catch that 6-pounder again tomorrow.” 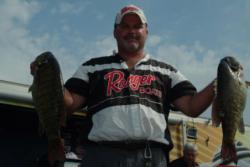 Pro Christopher King of South Amherst, Ohio, grabbed fourth place with a catch of 18 pounds, 6 ounces, while Mike Hoskings of Dumfries, Va., landed in the fifth spot with a total catch of 17 pounds, 7 ounces.

Best of the rest:

Rounding out the top 10 pro finalists at the Lake Erie event: 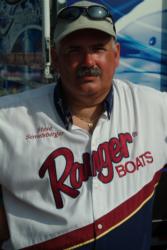 After Semelsberger’s harrowing day on the water, he was more than happy to hold a nearly 4-pound lead heading into Saturday’s finals.

“The whole week has been just unbelievable,” said Semelsberger, in probably the biggest understatement of the day. “I had the largest stringer I’ve ever caught on the first day. I only caught one fish on the second day and still made the cut. And everything worked out today. I’ve just been very fortunate.” 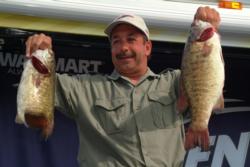 On the strength of a 16-pound catch, Matt Scholzen of Racine, Wis., remained within striking distance of first place and kept his dreams alive for a tournament title.

“This week has been great,” said Scholzen. “I’ve had three really good partners, and I’ve been fortunate to have caught the right fish all week.”

Rounding out the top 10 co-angler finalists at the Lake Erie event: