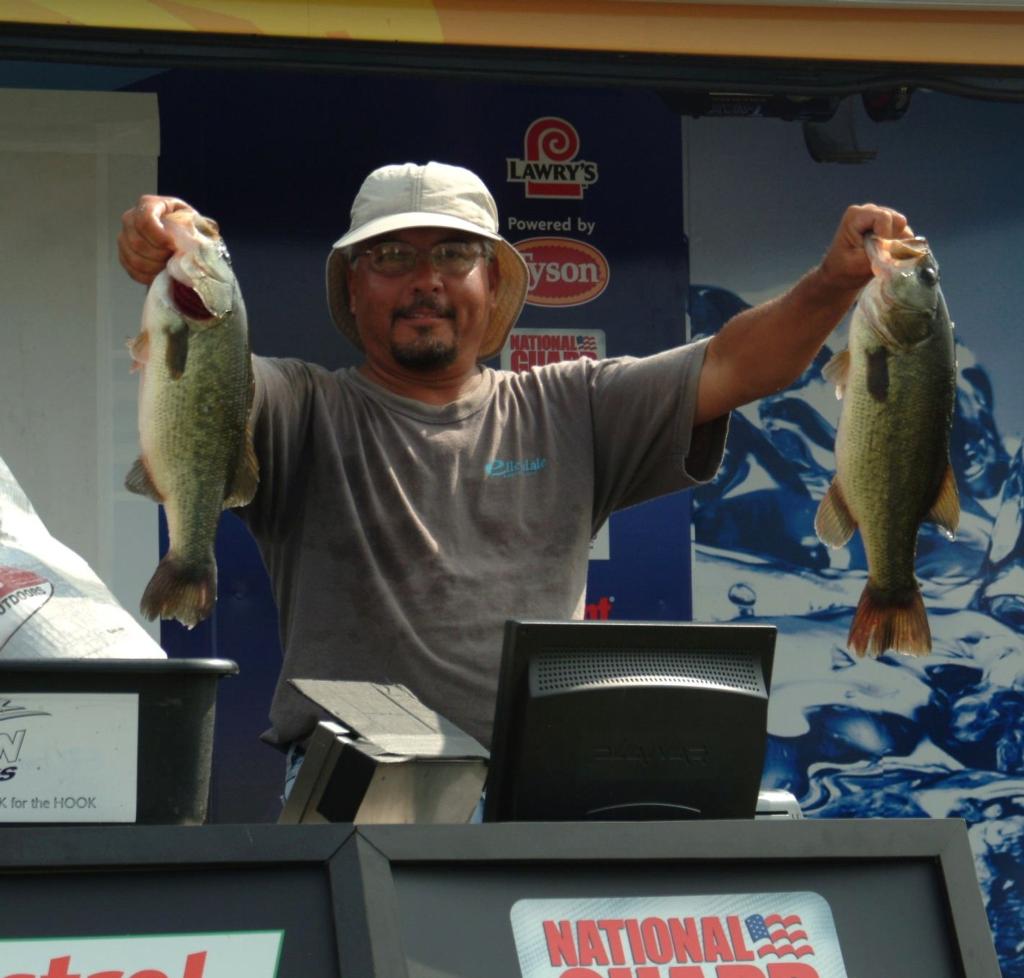 FORT MADISON, Iowa – A cool, rainy morning gave way to a hot, sunny afternoon Wednesday, day one of the Stren Series Midwest Division event on the Mississippi River. When the rain passed and the clouds broke, the stubborn largemouth bass were gracious enough to make a brief appearance.

Even with the sun coming out, the fishing was still very difficult. Only 32 of the 144 pros registered a five-bass limit.

Pro Lloyd Pickett Jr. thought he, too, was in for a long day when the tilt and trim on his outboard malfunctioned early in the morning. His boat problems cost him roughly 45 minutes of fishing time, but in the end, it may have benefited him.

“It was a really bad morning,” said Pickett. “You just have to keep a positive attitude when that stuff happens.”

Pickett had plans to make a considerable run south. However, with his tilt and trim giving him problems, he wasn’t able to put his boat on plane. Instead the Bartlett, Tenn., pro decided to stay close to the launch. The change of plans resulted in a sizable limit on a tough day.

Pickett’s five bass weighed 15 pounds, 6 ounces and gave him a 1-pound, 5-ounce lead over his nearest competitor. Because of his engine problems, Pickett only fished two of his five spots.

“I’ve had a great practice. I’ve keyed in on the right color and the right depth.”

Pickett’s home is on the Mississippi River near Memphis, Tenn., but he said he’s never fished this stretch of the Big Muddy. While he may not possess tons of experience, he certainly has had his share of success on the Mississippi.

At the previous Stren event held in Onalaska, Wis., Pickett missed the cutoff by a single ounce. Adding injury to insult, Pickett quit fishing early in the day thinking he had enough to advance to the second round.

On day one in Fort Madison, he caught fish flipping and on a SPRO topwater frog. He used the frog early, while it was still cloudy and overcast. As the day progressed and the cloud cover receded, Pickett picked up his flipping stick and started flipping a finesse tube in and around submerged structure in 3 to 4 feet of water.

Pickett wanted to acknowledge the cooperation of his family as part of his success.

“My wife and kids support me 100 percent. Being able to practice and put in the necessary time makes all the difference in the world.” 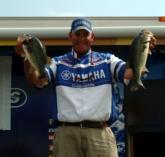 Coming off an eighth-place finish at the Onalaska event, William Davis of Russellville, Ala., caught a limit of 14 pounds, 1 ounce and finished day one in second place in the Pro Division. Davis is competing in the Midwest Division as a means of qualifying for the $1 million Stren Series Championship near his home in Decatur, Ala.

“They came all day,” said the tournament veteran. “It’s a matter of being patient. I’ve just been adjusting to the fish. I caught them in practice, but they moved on me a little bit.”

Davis threw a combination of a spinnerbait, a 12-inch worm and a frog to catch his fish.

Davis worked the same 300-yard stretch of water all day. He could be in a little trouble tomorrow if his fish don’t replenish as he claimes to have no other areas.

Tad Ladd of Princeton, Ky., caught a five-bass limit weighing 13 pounds, 11 ounces to finish the opening day in third place among the pros. Each of Ladd’s five keepers were largemouth bass.

Walker said he caught his fish exclusively on a topwater frog. In fact, he never even tried a different bait all day. 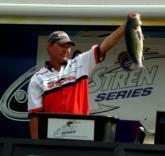 Tied for fifth place in the Pro Division are Mark Fisher of Glenview, Ill., and Tim Pettit of Moline, Ill. They each caught a limit weighing 13 pounds, 9 ounces.

Pettit earned $450 for the Snicker’s Big Bass award in the Pro Division thanks to a 5-pound, 10-ounce bass.

Rounding out the top 10 pros after day one at the Mississippi River:

Each of the top 10 pros caught five-bass limits Wednesday.

Todd Kuipers of Lafayette, Ind., and Kevin Whitaker of West Chicago, Ill., caught five-bass limits Wednesday that weighed 12 pounds, 6 ounces. While Whitaker was one of the first co-anglers to weigh in, Kuipers didn’t bring his fish to the scale until the very end.

“My partner really put me on them today,” Kuipers said. “I was just lucky to be in his boat.”

Kuipers said he caught 14 fish total, five of which were keepers, by throwing a plastic bait in shallow grass.

“It’s a really nice start. I needed a good tournament to get back in the hunt for the championship. Ryan (Chandler, his pro partner) knew he was around fish, so he stuck it out. He’s on a group of fish; we just had to wait it out.”

Whitaker said he caught all of his fish late when the sun came out. Fishing with pro Benji Wilhelm, Whitaker employed a swimming jig and a spinnerbait.

Third place for the co-anglers was a tie between Caleb Kuphall of Mukwonago, Wis., and Timothy Vieth of Marthasville, Mo. Each registered a five-bass limit weighing 11 pounds, 5 ounces.

David Taylor of Riverview, Miss., placed fifth on the co-angler side with a limit weighing 11 pounds even.

Bakken caught a largemouth bass that weighed 5 pounds even to win $190 and the Snickers Big Bass award.

Day two of Midwest Division competition on the Mississippi River at Fort Madison begins as the field of 144 boats takes off from Captain Kirk’s Marina at 6:30 a.m. Central time Thursday for the second half of the opening round. Following tomorrow’s action, both fields will be cut to the top 20 anglers apiece based on two-day total weight.