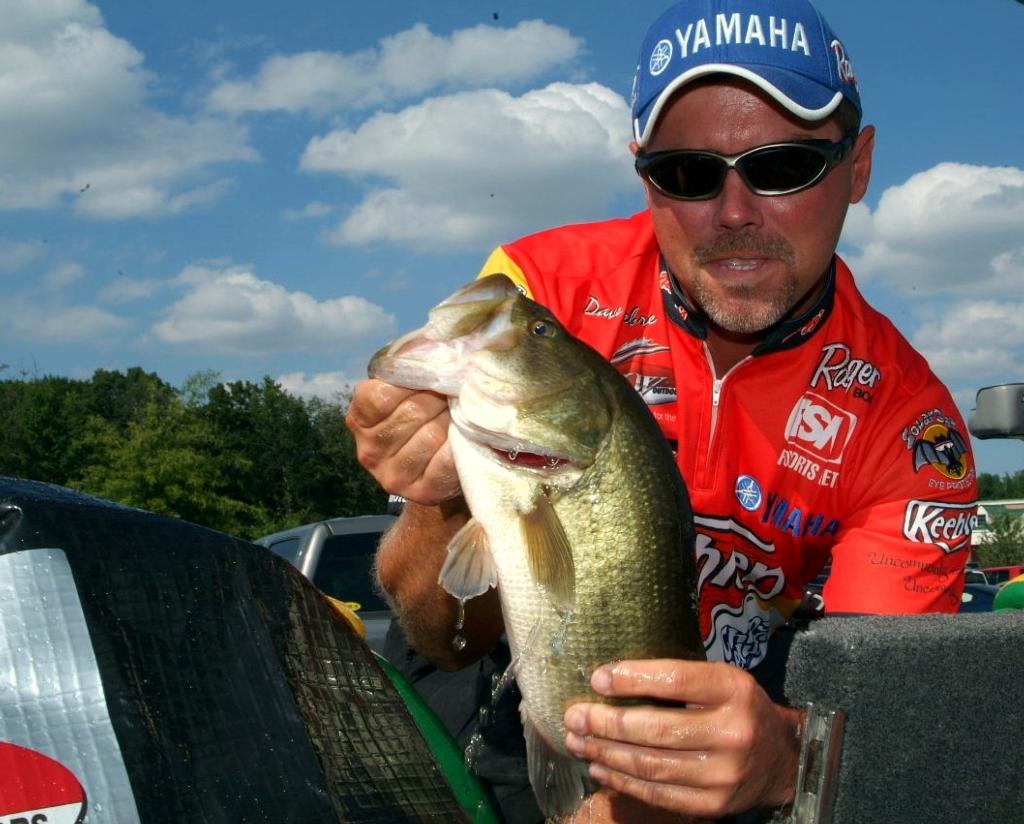 LA PLATA, Md. – When the opening round of Stren Series Northeast Division competition ended Thursday afternoon, Dave Lefebre was feeling very confident about his fishing on the Potomac River. By the end of Friday’s first half of the finals, the pro from Erie, Pa., was nearly vibrating with confidence, almost to the point of cockiness.

“(Tomorrow), if they’re on the bite like they were today, I’m telling you, man, it could be fun,” said Lefebre, a tour veteran with both a Stren Series and Wal-Mart FLW Tour victory already under his belt.

Lefebre caught a five-fish limit of largemouth bass weighing 16 pounds, 12 ounces and leads the Pro Division by 10 ounces over second-place Chris Baumgardner. And he’s got lots of company besides Baumgardner, as well. All 10 pros who made the cut caught limits Friday, and everyone is sitting within 5 pounds of each other, which is the size of one good Potomac River bass.

But in fishing, confidence is everything. Lefebre knows that, which is why he’s not shy about proclaiming his excitement about Saturday’s final round.

In fishing, good information is also worth something, and Lefebre knows that, too. That’s why he was extremely reluctant to divulge the particulars of his fishing pattern Friday afternoon.

“I’m doing something a little different,” he said. “I wish I could, but I can’t tell you what it is yet.”

What he would say, however, pointed to a promising outing for the Keebler Kid on Saturday. Lefebre said he’s “fishing grass,” which is nothing special here this week. His main pattern involves some kind of prototype Mizmo “baits” – two kinds, actually – that he’s been excited about for a few months.

However, what has him really buzzing are the “accidental” bass he keeps catching every morning before he goes to his grassy area with the Mizmos. Before the tide sets up right for his Mizmo pattern later in the day, Lefebre has been throwing a Lure Jensen buzzbait in the morning in search of lunkers. And everyday he has managed to catch one – or more. 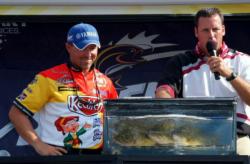 “In the morning I’m just going around kind of junk-fishing and catching them on a buzzbait. Everyday I’ve caught a bigger one early, and I’ve weighed in a good fish each day on a buzzbait,” he said. “The tide is getting later everyday, and that’s playing right into my hands because I can really go swinging for the fences tomorrow morning. I should have a two-hour window which will be really good.”

And conditions have perked up in general for the anglers over the last day. Intermittent clouds in the morning Friday allowed the bass to creep out from under their cover for brief periods, which made them easier to catch without causing breakoffs. Even more cloud cover is forecast for Saturday morning.

“With the clouds, it’s very possible to catch 15 pounds in the morning just on the buzzbait,” Lefebre said.

And that could spell trouble for the rest of the field because Lefebre thinks he can win it anyway even without the buzzbait pattern. His shallow, moneymaking, Mizmo fish aren’t diminishing, he says, and he admitted that he even left some on the table Friday.

And another, he didn’t.

“I left them biting today. I culled several 3-pounders with other 3-pounders, and I could have kept fishing,” he said. “My biggest fish, I pulled out of a barge. I was using 20-pound Gamma line and it was frayed 4 feet up the line. It should have broken, but it didn’t.” 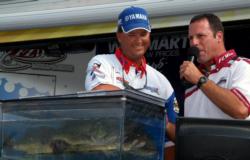 In reality, Lefebre probably is worried at least a little bit about second-place Baumgardner, a fellow FLW Tour pro out of Gastonia, N.C., with several top-10 finishes to his credit. Baumgardner’s limit weighed 16 pounds, 2 ounces, and he thinks he has more where that came from.

“I had a good day today. I had more bites than I’ve had all week,” Baumgardner said. “It was cloudy in the morning, and the topwater worked really well. Then I caught some on a Chatterbait, and then some on a Zoom Speed Craw. I culled two or three times with that, and it all worked out.”

Baumgardner said he’s moving with the tides, following his fish around his milfoil-hydrilla area, but says the current hasn’t bothered him.

“As long as (the water’s) moving, you can catch them,” he said. “I just hope that I saved enough for tomorrow.”

Also feeling positive about his chances is David Borodziuk, the pro out of Audubon Park, N.J., whose limit weighed 15 pounds, 9 ounces and earned him third place.

“I’m pretty confident that I can get that kind of bag again tomorrow,” he said. “The tides don’t matter. The wind doesn’t matter. There’s still a bunch of fish in there.”

Borodziuk said he fished three distinct patterns Friday: He threw a frog in the morning, focusing on draining creeks in the outgoing tide. Then he flipped heavy grass mats when the sun came out. His biggest weapon, he said, however, was a series of six stumps that he found holding good fish. There, he’s throwing Rapala DT crankbaits of various sizes.

“I found those fish about three weeks ago,” he said. “This is something that I’ve never done before.”

James Kemper of Frankfort, Ky., placed fourth for the pros with a limit weighing 15 pounds, 8 ounces.

He caught his fish on a potpourri of baits, as well, Friday, ranging from spinnerbaits, worms and flipping jigs. He’s fishing both hydrilla beds and laydowns.

“The better fish are tight to clumps of grass or some type of structure,” he said. “This is a phenomenal fishery, but the area I’ve been fishing has been getting hammered. So I’ve got to make some decisions tonight about where I’m going to go tomorrow.”

Acord fifth, running out of time

George Acord Jr. of Lancaster, Pa., placed fifth for the pros with a limit weighing 15 pounds, 5 ounces, but he’s concerned about Saturday.

“I hate to say it, but I think I have a problem. I’m not out of fish, but I’m out of time,” he said. “The part of the tide when I’m catching the most fish will be exactly when we’re putting our boats up on the trailer tomorrow. The sweet part of the tide for is the later part of the incoming tide. Unfortunately, that’s when we’ll be coming in tomorrow.”

Rounding out the top 10 pros fishing in Saturday’s finals on the Potomac River:

Each of the top 10 finalists caught a five-bass limit Friday.

Mike Orbell of Silver Spring, Md., took a relatively decisive lead in the Co-angler Division with a five-bass limit weighing 12 pounds, 15 ounces. His closest challenger is almost 2 1/2 pounds behind him.

“I have been catching them on three or four different baits, but today I caught them mostly on a jig in the grass,” said Orbell, a native New Zealander who’s lived in the States for some 25 years. “I only had five keeper bites, and I didn’t catch my first keeper until about 9:30.”

“I just caught them up in a river on crankbaits,” he said. “When things are going your way, they just go your way.”

Leroy Harriott of Woodbridge, Va., earned third place for the co-anglers with a three-bass weight of 10 pounds, 5 ounces.

Day four of Northeast Division competition at the Potomac River begins as the final-round field of 10 boats takes off from Smallwood State Park near La Plata at 6:30 a.m. Eastern time Saturday. Friday’s weights carry over to Saturday, and each division’s winner will be determined by two-day combined weight.