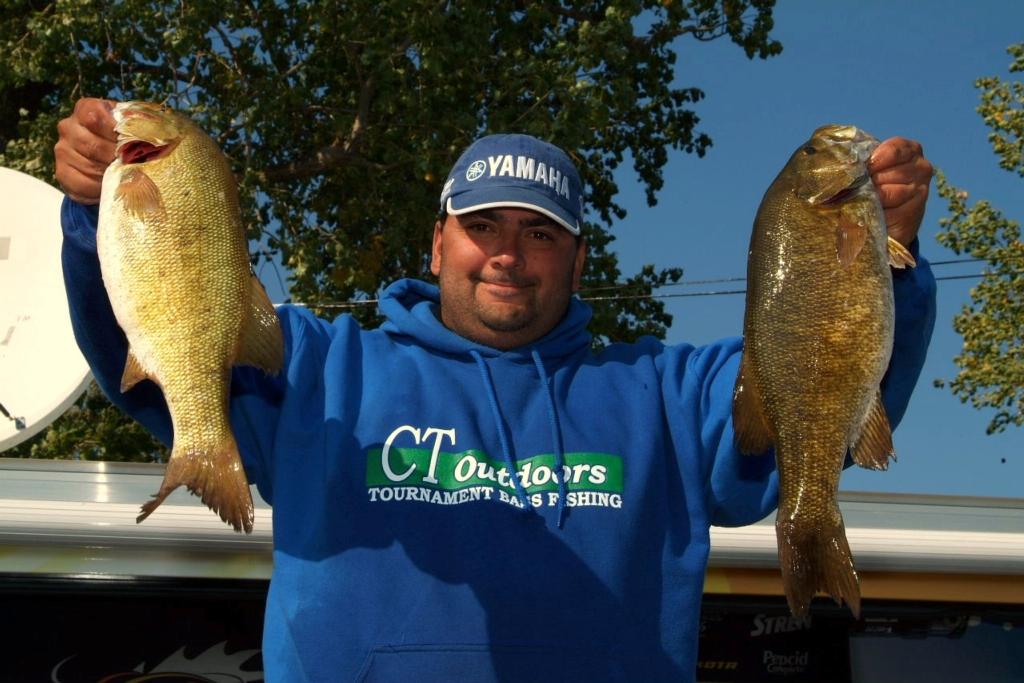 PLATTSBURGH, N.Y. – The forecast called for a 10- to 15-mph breeze at Lake Champlain Wednesday. Instead, a sustained 20- to 25-mph south wind wreaked havoc on Stren Series anglers as they opened competition in the final Northeast Division tournament of the season. Still, the boat-busting, 5-foot waves and whitecaps couldn’t keep this prolific bass fishery – or the intrepid anglers – down.

Almost half the 191-man Pro Division still managed to catch five-fish limits. The top weight of the day went to David Cioppa of Hopkinton, Mass., who caught a limit of smallmouths weighing 18 pounds, 13 ounces.

“I had a super day out there today. I probably caught about 24 fish, all smallies, in about 38 feet of water,” Cioppa said. “I stopped fishing by 10 o’clock.” 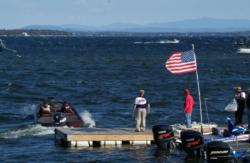 Cioppa said he caught the bulk of his fish on a drop-shot with a 1/2-ounce weight on the end to battle the waves and depth.

“Right now, the better ones are out deep. I was fishing a shoal, moving up and dropping down along the break,” he said. “I actually sat right out in the middle of Lake Champlain, and I burned out my trolling motor by 10:30. I had it on a hundred percent the whole time.”

Like many today, Cioppa seemed grateful to be back on land, out of the waves, at Wednesday’s weigh-in. But he plans on heading right back out into the thick of it Thursday – that is, if the wind settles down enough in the morning for the anglers to get a green light to go fishing.

“It was calmer this morning, but I was taking waves over the front of the boat later,” he said. “It wasn’t easy, but I’m going to do the same thing tomorrow, for sure.” 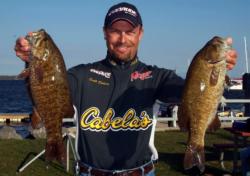 Scott Dobson, a pro out of Clarkston, Mich., who’s a perennial contender at Champlain, grabbed second place with a limit of smallmouths weighing 18 pounds, 10 ounces.

Fishing a familiar open-water hump with a drop-shot, he caught three fish early, and then moved down a break throwing a spinnerbait until he filled out his limit. Dobson said the area he fished was the same area that led him to a sixth-place finish in Wal-Mart FLW Tour competition here in June.

“Actually, it was the exact same spot,” he said. “I just took my time getting back – it took about an hour – and I had a great day.” 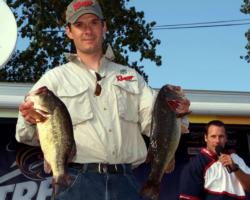 Pro Kevin Kartesz of Jamestown, N.Y., placed third with a limit weighing 18 pounds, 9 ounces. Unlike the top two pros, however, Kartesz’s limit consisted of largemouth bass, which he caught by making the long run to the south end of the lake.

“I’ve run it before, so I knew how long it would take,” he said. “With the wind out of the south, you can just kind of ride the waves back, in fact, ride in between them. It took me two hours to get back, but I left early, took my time, and we did all right.”

Kartesz caught his fish keying on grass in 6 to 8 feet of water.

“I was really looking forward to this one,” he said. “I missed a few tournaments this year due to work, and I’m just happy to be out here.”

“I fished two spots all day,” he said. “With the wind, getting there is the biggest problem. But I made it to both of my spots and got to fish the way I wanted to. I just hope we get to go fishing again tomorrow.”

Rounding out the top 11 pros after day one at Lake Champlain:

Kevin Bishop of Hilton, N.Y., caught a 5-pound, 9-ounce largemouth to earn the day’s Snickers Big Bass award in the Pro Division, worth $700.

Rounding out the top five co-anglers is Chris Girourd of Epsom, N.H., with a limit weighing 14 pounds, 15 ounces.

Day two of Northeast Division competition at Lake Champlain is scheduled to begin as the field of 191 boats takes off from Plattsburgh Boat Basin at 7 a.m. Eastern time Thursday for the second half of the opening round. Following tomorrow’s action, both fields will be cut to the top 20 anglers apiece based on two-day total weight.

However, due to the high wind factor, there is a possibility that competition could be called off, which has happened before at Lake Champlain. Tournament director Chris Jones said he would make the call Thursday morning, depending on the conditions.

“We’ll call the National Weather Service and the Coast Guard in the morning and see how it goes,” he said.

If the anglers don’t fish Thursday, the cut will be determined by day-one weights.