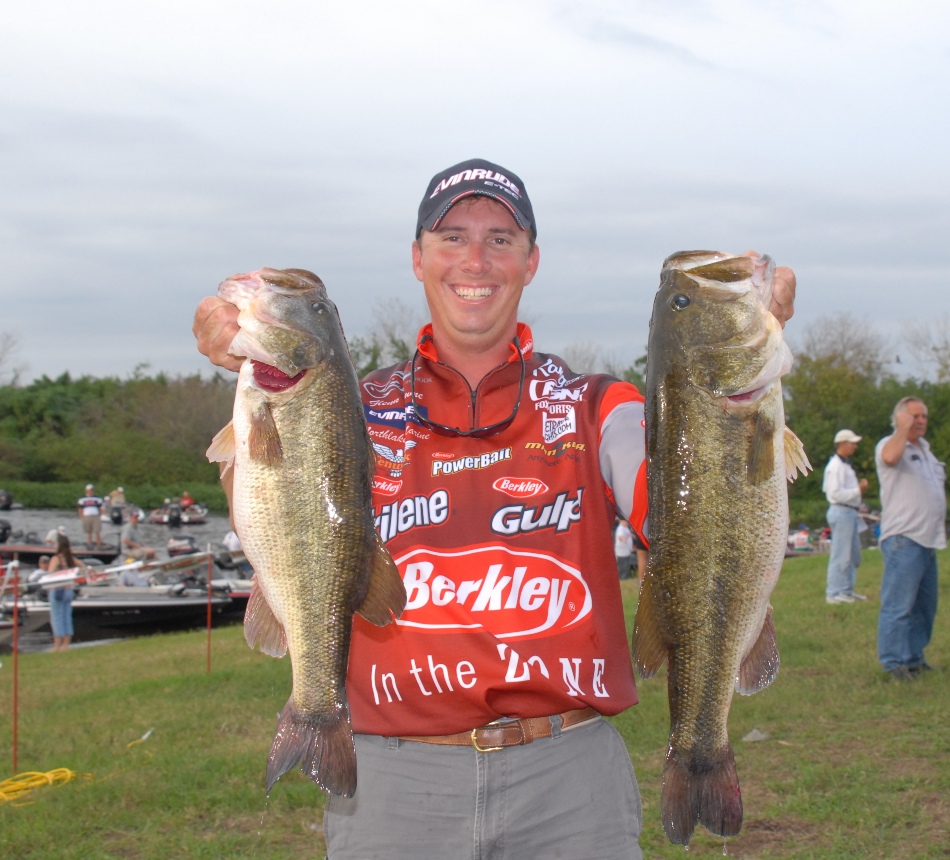 OKEECHOBEE, Fla. – Stren Series Tournament Director Chris Jones got interrupted a lot more during the day-two weigh-in at Lake Okeechobee thanks to the number of big bass that pros and co-anglers continually pulled out of their bags to test for the big-fish honors.

Indeed, Okeechobee was back to her old self today, cranking out big bass. Plenty of 7-, 8- and 9-pounders were shown off to the nation via FLW Live, which streams real-time video of the weigh-in over the Internet.

Now leading the pack is Ocala, Florida’s Glenn Browne, who has fished Okeechobee since he was a kid. Browne sacked a respectable 15 pounds, 5 ounces Wednesday and added 21 pounds, 13 ounces to it today for a two-day total of 37 pounds, 2 ounces, giving him over a 3-pound lead.

Browne is known as a flipper on the Big O, but today he was, as he put it, “way out of his element.”

“The stuff I normally flip is high and dry, so I had to switch up tactics and do something different,” Browne said. “I’m cranking a Berkley Frenzy Shad FD-7 around rock.”

Browne relied on his vast Okeechobee experience to find the fish.

“These are places I’ve fished for years,” he said. “I think a lot of the fish I’m catching are postspawners. There are beds all up around the bank, but they’re empty.”

Chad Grigsby of Maple Grove, Minn., moved into second place with a 21-pound,

5-ounce catch Thursday for a two-day total of 34 pounds, 5 ounces.

“I had those kinds of fish on yesterday, but I lost them,” Grigsby said. “These Florida fish are so strong, they just take off with your stuff through that thick vegetation, and there’s not a whole lot you can do except hold on and hope for the best. Today, things went my way; I got the right ones in the boat.”

Grigsby did allude to moving out further off the bank this afternoon for an improved bite.

“The area I’m fishing is getting pounded,” he said. “A lot of guys are up shallow, running trolling motors. So this afternoon I quit using the trolling motor and let the wind drift me out off the bank. I was just about to pick up and leave when I got a few bites way out. I kept making drifts through the area until I fine-tuned the hot spot, and then it was on – the big ones started biting.”

Matthew Parker of Whitesburg, Ga., well known for his co-angling success in the Stren Series and on the Wal-Mart FLW Tour, has switched to the front of the boat this year, and he is already off to a great start.

“I’m targeting schooling fish with a Rat-L-Trap,” Parker said. “I’ve got three places where the wind is creating current in little funnel-type places. The shad are getting blown in there; the birds are working the shad on top, and the bass are working on them from underneath. Every now and then I’ll see a big bass bust a shad. Today we watched a 6- or 7-pounder jumping and tail walking while trying to get rid of a giant shad that had gotten lodged in its mouth sideways; it was a wild sight to see.”

If you are scanning the top five for Chris Lane, who was in fifth place yesterday, he 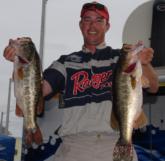 stumbled a bit today. But not to worry: Arnie Lane, Chris’ brother, has taken over his spot in the top five.

“I got in a little bit of a hurry yesterday, and it cost me,” said Lane, who weighed in 10 pounds, 10 ounces yesterday. “Not only did I lose some fish, but I wasn’t presenting the bait right. Today I really slowed down and became as methodical with my presentations as I could get. I realized that casting accuracy is a huge part in how I’m fishing, and I started soaking that bait once I got it in the right place.”

Michael Murphy of Gilbert, S.C., has also checked in some consistent weights over the last two days: 14 pounds, 14 ounces and 15 pounds, 5 ounces, respectively, for a two-day total of 30 pounds, 3 ounces.

During practice, Murphy spent a lot of time with a push pole, feeling the bottom for rock.

“I think the hurricanes ripped up some of the lake bottom in certain areas, and I’ve tried to find those places where big grass islands were ripped up, exposing rock and hard bottom,” he said. “I located about four places like that, and the fish seem to be using that harder bottom to spawn.”

Craig Dowling of Many, La., took the Snickers Big Bass honors in the Pro Division today with a whopping 10-pound, 4-ounce bass.

Austin Spurlin of Fayetteville, Ga., is having the fishing trip of a lifetime at Lake Okeechobee. Not only is this his first trip to the Big O, but this is his first Stren Series event.

Today Spurlin boated the biggest bass of his life, a 9-pound, 2-ounce lunker, which took the day-two Snickers Big Bass award in the Co-angler Division and moved him into the co-angler lead with a two-day total of 26 pounds, 15 ounces.

After catching a decent limit on small plastics, Spurlin decided to try for some real meat, and he tied on a big jig.

“With about an hour left in the day, I started flipping the jig around grass,” he recounted. “The line got funny, so I set the hook into dead weight – I really thought I was hung – then my rod just yanked away from me like a freight train, and all I could do was hold on.”

Aaron Fahnestock of Enterprise, Ala., is in second place with a two-day total of 22 pounds, 9 ounces. He, too, caught a giant bass on a jig today to anchor his day-two string of four fish for 14 pounds, 4 ounces.

Brady Neslon of Palmetto, Fla., is in third place with a two-day total of 22 pounds, 9 ounces.