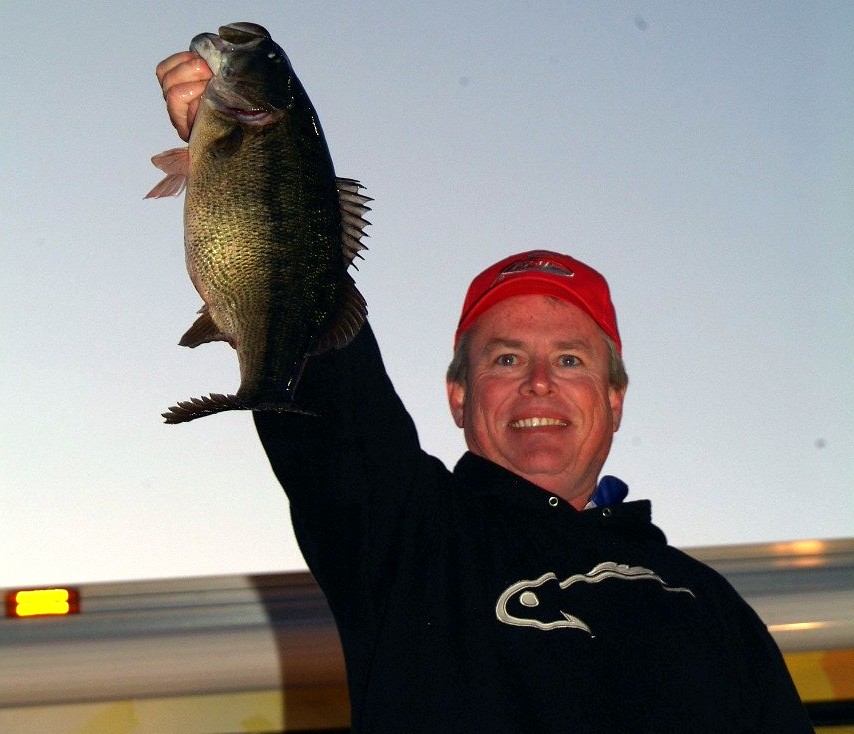 REDDING, Calif. – With all the hype about how close this Stren Series Western Division opener was thanks to the plethora of five-bass limits at Shasta Lake, Gene Gray left no doubt about who won this tournament. The pro from Atascadero, Calif., popped another 13 1/2-pound bag in Saturday’s finals and left everybody else behind by more than 2 1/2 pounds.

After leading Wednesday with a limit weighing 13 pounds, 11 ounces – which was bolstered by a hefty 5-15 kicker spotted bass – Gray hovered around the 10-pound range the next two days to make the cut. On Saturday, he managed to hook into another big spot, a 5-10 kicker, limited out at 13-8 and blew his fellow Shasta finalists out of the water with a winning four-day weight of 47-3.

As predicted, this limitfest was decided by the rare kicker fish that came across the scale. It just so happened that Gray caught two of them this week, but by no means were they accidents. His fishing strategy was about as simple as it comes. While some competitors fruitlessly spent time trying to catch bigger fish on a swimbait presentation that just wasn’t happening, all Gray did was dangle a Yamamoto Senko, wacky-style, throughout the week. The slower-than-slow approach worked to a tee under the wintertime conditions, especially as temperatures dropped toward the end of the week. 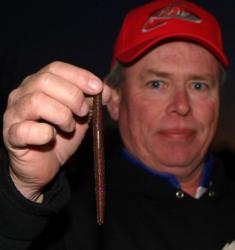 “It’s the greatest bait that’s ever been made,” said Gray, who caught his winners Saturday on a 4-inch green-pumpkin-and-purple Senko with an 1/8-ounce weight. “You can weight it, go weightless – anything you want to do with it, you can. I just have a lot more confidence in it when I do it wacky-style.”

Two things may have helped Gray hook into those big kickers. One, he scented his baits, which he believes helped him with his hookups immensely.

Two, he fished up the Pit River arm of Shasta Lake. There, not only did he find schools of slightly larger fish, he felt right at home dropping his wacky-rigged Senko to suspended spotted bass in the deep, clear water.

“Where I live (in Atascadero), we have Nacimiento Reservoir, and it’s just like this place. They’re very similar in shape and the way they fish. It has big rock walls, and that’s what I target here,” Gray said. “This lake just makes sense to me. I just go out, try my thing, and it works.”

Unlike many anglers who reported catching 40, 60 or even a hundred fish a day, Gray said he only averaged about 15 or 20 keepers a day. And that was by design.

“I think the places I was fishing, there weren’t as many fish, but I really believe those areas had a little bigger fish,” he said. “Today the wind died down a little bit; it was calm all over the Pit arm. That really, really helped me because I was fishing with such light weights.”

Gray’s familiarity with this lake has earned him trips to the Saturday rodeo before at Shasta. He finished eighth at last April’s Western Division stop here, and last weekend he finished sixth in a WON Bass tournament here. But finally – at his home lake away from home – he has captured his first big win, not to mention a $25,000 victory check.

“Can you believe it? I still can’t believe it,” he said. “I’ve been doing this for 15 years, and this is the highlight of my career right now. I’m just in awe.” 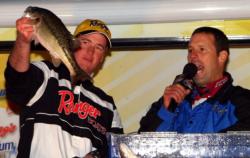 His limit weighed 10 pounds even Saturday, and he said it was all he could do after pushing his luck early in the week.

“I burned out all my fish the first day, so I pretty much just ran around looking for stuff the last couple of days,” he said. “But I had a great weekend. It was an awesome time.”

Meyer said he caught his fish mainly on a ¼-ounce darthead with 6-inch Roboworms and Smallie Beavers. 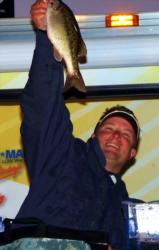 After a rousing start to the week, Friday’s pro leader Michael Tuck of Antelope, Calif., could only muster a 9-pound, 1-ounce limit Saturday and fell to a third-place finish with a 44-6 four-day total. He earned $7,471 plus a $5,000 Ranger bonus.

“I started out every morning throwing a Voodoo swim jig, and that’s how I found most of my fish. Then later in the day I switched to a ¼-ounce Limit Lures darthead and a Prism Craw Roboworm,” he said. “I had a lot of fun and caught a lot of fish this week, but next time I’m going to win this thing, man. I’m tired of finishing second and third.”

Mike Menne of Redding, Calif., led the local pro contingent by finishing fourth and collecting $6,641 with a four-day total of 42 pounds, 3 ounces. He caught a limit weighing 9-4 Saturday.

“It was considerably colder today, but I just fished hard and hit a lot of spots,” said Menne, who said he threw a ¼-ounce darthead and caught all of his fish on a tube. “I was fishing between 10 and 40 feet, and I just went through a lot of fish.”

Phil Strader of Glide, Ore., rounded out the top five pro finishers with a four-day weight of 42 pounds even. He caught a limit weighing 9 pounds, 5 ounces Saturday and earned $5,810 for fifth place.

“I was doing something a little different in that I was fishing shallow this week,” said Strader, who also weighed in one smallmouth. “I was just throwing a 3/8-ounce football-head Spider jig at the bank.”

Rounding out the top 10 Pro Division finishers at Shasta Lake:

All of the top 10 pro finishers caught limits all four days of the tournament.

The next Stren Series event is a Southeast Division contest at Lake Seminole near Bainbridge, Ga., Jan. 31-Feb. 3.

The next Western Division tournament is the second event of the season. It will be held at Lake Mead near Las Vegas, Feb. 21-24.