Vinson, Smith tie for Stren Series lead on day one 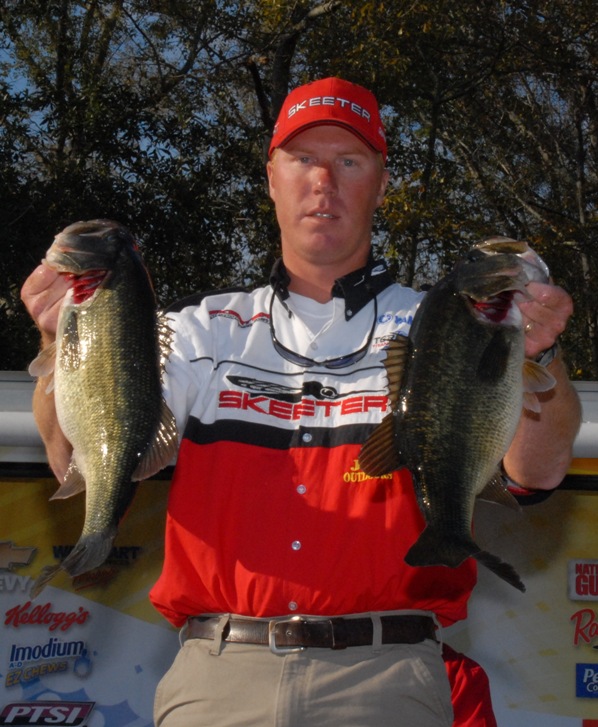 To say fishing was tough on day one was an understatement. Some anglers who have endured a fishless practice and a fishless day one in the event seemed at loss for words to describe the way Seminole is fishing right now.

Consider that out of 394 combined pros and co-anglers, there were a grand total of 11 limits caught, 10 on the pro side and one on the co-angler side.

Several anglers even kidded about “locking back down to Okeechobee” for the remainder of the tournament.

Clark Smith of Pell City, Ala., and Greg Vinson of Wetumpka, Ala., are currently tied for the day-one lead at 17 pounds, 10 ounces.

Smith’s catch was composed of a five-bass limit, which included an 8-pound, 12-ounce kicker. 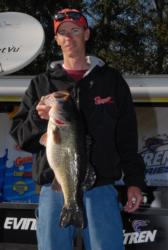 He caught all five in the last hour of the day, a Seminole feeding frenzy for sure.

“I spent the day just bouncing around the lake fishing here and there without a bite,” Smith recounted. “Then I moved over to this one area that had wind blowing up into a little cut and I’m guessing the wind had some shad pushed up in there because the bass were biting. I caught five and my co-angler caught two in the span of an hour before we had to leave.”

Smith noted that his fish came out of about 9 feet of water.

“I hope it holds up because it’s the only thing I’ve found since I’ve been here.”

“I ended up catching them a little shallower than I had expected,” Vinson said. “I spent the morning working out deep where I found them in practice. My co-angler and I caught just one fish a piece out there and nothing else.

“So at about 1:30 this afternoon, with nothing else to go to, I decided to move up a little shallower and I hit a little flurry up there. I’m pretty sure they’re part of the same group of fish I found in practice, but it really surprised me that they moved shallower. With this cold weather, I just figured they would stay out deeper where I first found them.” 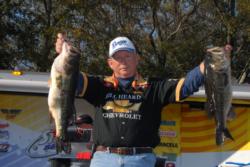 Just 1 ounce off the two-way tie for first is Mike Cox of Huntsville, Ala., with a four-bass catch for 17 pounds, 9 ounces.

No one was more surprised with his catch than Cox himself.

“I only had six bites in three days of practice,” Cox said. “When I went out this morning, my goal was just to catch something, anything. I had no idea this was going to happen. I had five bites all day, lost one and had the four I weighed in by 9 a.m. this morning.”

Cox said he is flipping in shallow water and has no idea what to expect tomorrow.

“I’m just going to go out and do it all day again and hope for the best.”

Klys described his fish as “very area oriented,” and said he is trying to manage his area accordingly.

“One thing I know about this lake is that the productive areas are very fragile,” he described. “You can’t sit there and pound an area all day and expect it to produce the next day. So once I got limit out of my best spot this morning, I backed off and went elsewhere.”

“I’m fishing 3 to 8 feet of water in a couple of areas that are real close to prime bedding areas,” he added. “I think they were ready to go on bed before that cold weather hit. In fact, a couple of my fish looked almost like post-spawn fish – skinny and beat up.”

Klys reported catching his fish on a combination of a Berkley Frenzy Rattler and a Berkley Chigger Craw.

Tony Davis of Williston, Fla., rounds out the top five with a limit weighing 14 pounds, 4 ounces.

Rest of the best in the Pro Division

Anderson’s catch included a 6-pound, 3-ounce bass that he reported catching from open water on a crankbait.

“Things were pretty slow up until about 3 p.m.,” Anderson said. “Then I caught three fish in a row. It was like someone hit a switch and they turned on for about five minutes.”

Alan Hults of Gautier, Miss., was the only co-angler to catch a five-bass limit from Seminole’s waters today.

His weight of 11 pounds, 10 ounces put him in second place.

“I had a real good partner, Michael Murphy, and I just fished whatever looked good at the time,” Hults said. “I ended up catching one on a crankbait, two on a jerkbait and two on a jig.”

Billy Roberson of Rincon, Ga., is in third place with 10 pounds, 6 ounces.

Brad Pegram of Henderson, N.C., is in fourth place with 9 pounds, 7 ounces.

Byron Thornton of Valdosta, Ga., is in fifth place with 8 pounds, 13 ounces.

Rest of the best in the Co-angler Division

Thursday’s competition begins at 7:30 a.m. at the Earle May Boat Basin in Bainbridge, Ga.