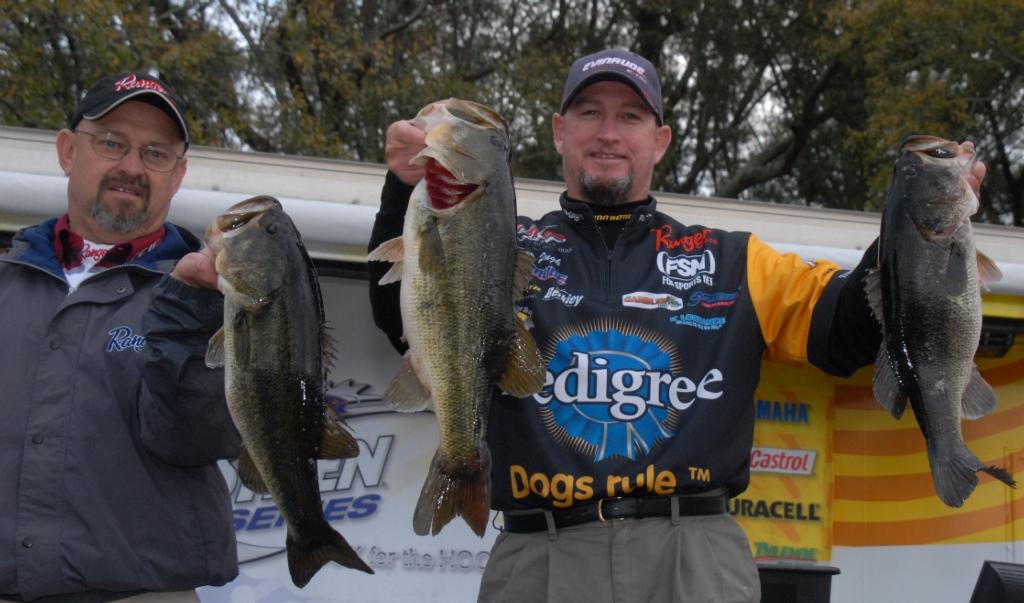 BAINBRIDGE, Ga. – Ever since the Stren Series Southeast Division event started on Lake Seminole three days ago, there has been talk of the lake producing mythical bags of giant bass.

Today, Greg Pugh of Cullman, Ala., made those myths a reality by bringing in a five-bass limit weighing 26 pounds, 10 ounces.

The monster bag, which included the Snickers Big Bass of the day weighing 7 pounds, 9 ounces, gave Pugh nearly a 10-pound lead going into the final day with a three-day total of 41 pounds, 15 ounces.

The Pedigree pro made no reservations about his technique: He has been flipping heavy matted vegetation all week, but he executed much better today.

“I’ve been around these type fish all week, and I finally got in the groove today as far as getting them in the boat,” Pugh said. “The last couple of days I’ve been a little too anxious, and I’ve been setting the hook too soon and they pulled off. Today, when I’d get a bite, I’d just let the fish swallow it and swim around with it before I set the hook.”

One of the key baits for Pugh this week has been a Gambler Ugly Otter and Little Ugly Otter.

“I’ve got something else I’ve caught a few on as well, but I don’t want to say what it is just yet.”

Amazingly, the Pugh caught the bulk of his catch in about 15 minutes, all from under one mat.

“It was unbelievable,” he said. “Every time I pitched in there, another big one would get it. I caught about 19 pounds in 15 minutes and culled four times.”

Davis hangs on for second

Tony Davis of Williston, Fla., brought just three bass to the scales today for 5 pounds, 14 ounces for a three-day total of 32 pounds, 9 ounces.

Davis revealed he is Carolina rigging a series of deep holes in 10 to 12 feet of water.

“My water clouded up a little bit on me today from all that rain,” Davis said. “I did have my five bites, but one broke off and the other came unbuttoned. Hopefully, if it gets cold tonight, it will help concentrate the fish in those holes a little better.”

Greg Vinson of Wetumpka, Ala., rallied back into third place today with a three-day total of 32 pounds, 6 ounces.

Vinson, who is fishing the same area and way as day-two tournament leader Clark Smith, said he is fishing offshore grass beds with a rattling, lipless crankbait.

“I’m targeting grass clumps along a river channel outside a spawning bay,” Vinson said. “It seems like each day my co-anglers and I have gotten a couple of bites first thing, and then it just dies, and I have to hunt and peck for another keeper or two the rest of the day.”

David Lowery of Milledgeville, Ga., took a brief hiatus from the top 10 yesterday, but rebounded with a 14-pound catch today to put him in fourth place with a three-day total of 32 pounds, 4 ounces.

“The wind killed me yesterday, but I could get on my spot when it was calm this morning,” said Lowery of his better catch today. “I’m fishing one small 25-yard stretch in about 24 to 27 feet of water. Boat position and being able to feel what I’m doing is critical, so the wind is my worst enemy.”

Day-two tournament leader Clark Smith of Pell City, Ala., brought just one bass to the scales today, and now he sits in the fifth position with a three-day total of 32 pounds, 3 ounces. 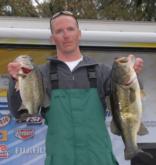 Brad Pegram of Henderson, N.C., who has knocked around the top 10 all week, locked himself into the co-angler lead with a four-bass catch weighing 14 pounds, 5 ounces today.

“I started the week doing some flipping, but that wasn’t working for me, so I went to a lipless crankbait, and I’ve been throwing it ever since,” Pegram said. “No matter where my pros go, I just throw it out and rip it by whatever is out there, grass, wood – sometimes even over just bare bottom.”

Donald Roberts of Riverside, Ala., is in second place with a three-day total of 17 pounds, 7 ounces.

“I caught them really deep on a drop-shot, and my best fish actually came on a jigging spoon,” Robertson noted.

Gene Crossway of Callahan, Fla., jumped into third place today with a five-bass limit weighing 13 pounds, 12 ounces. He now has a three-day total of 17 pounds, 4 ounces.

Frank Mackin of Tarpon Springs, Fla., is in fourth place with a three-day total of 14 pounds, 15 ounces.

Jimmy Anderson of Davie, Fla., is in fifth place with a three-day total of 14 pounds, 12 ounces.

The top 10 pros and 10 co-anglers will begin day-four competition on Saturday at 7:30 a.m. at the Earle May Boat Basin in Bainbridge, Ga.