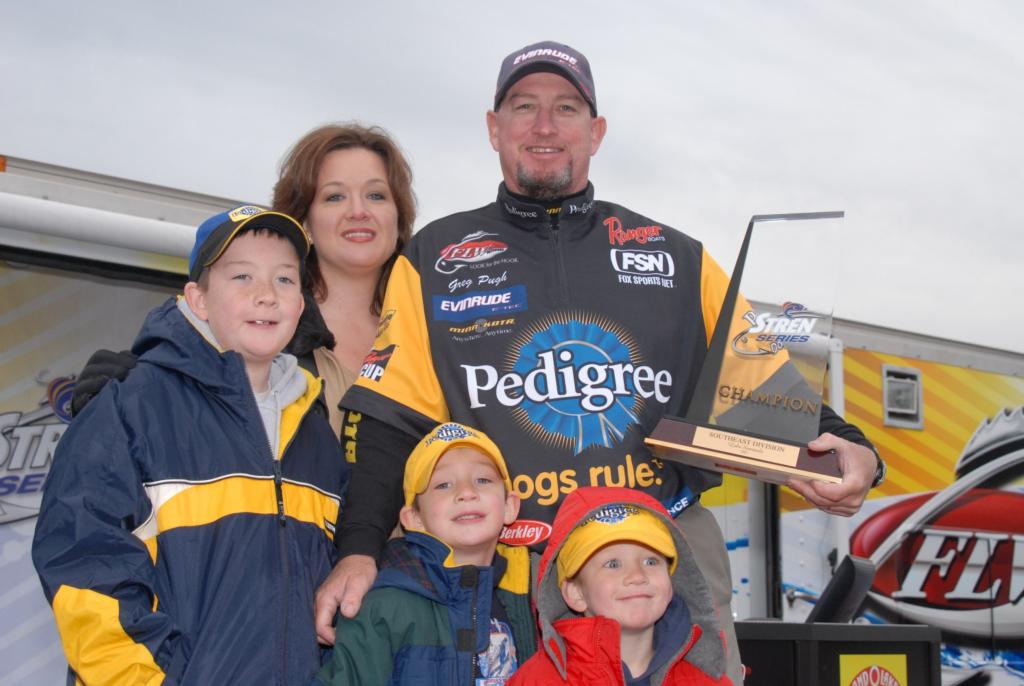 BAINBRIDGE, Ga. – He’s been second. He’s been third. He’s been fourth. In fact, looking at Greg Pugh’s Stren Series record for the last eight years, the Cullman, Ala., pro has finished in just about every position in the top 10 except for one: first.

That all changed today as Pugh won his first Stren Series event on Lake Seminole. And the win could not have come at a better time for the Pedigree pro.

“I’ve been through a drought over the last 12 months,” said Pugh, who only collected four checks out of 15 FLW Outdoors events last year. “When you’re in one of those dry spells, it really works on you. You start to wonder if you’re doing things right. You start to question your fishing and your decisions.

“Yesterday, when I caught the 26-10, it was like I broke free of all that doubt. I haven’t caught them like that in quite a while, and to do that made me feel like my old self again. So this win not only helps financially, it helps mentally as well.”

for 11 pounds, 10 ounces to fend off a hard 16-pound, 9-ounce charge from fellow Alabamian Greg Vinson. Pugh ended the event with a four-day total of 53 pounds, 9 ounces.

Pugh committed himself to backwaters off the Chattahoochee River, where he worked the bass with a flipping stick.

All plastics were topped with a 3/4-ounce tungsten weight and pitched on 60-pound-test Stealth braided line.

Greg Vinson of Wetumpka, Ala., came after Pugh with guns blazing today, turning in the best catch of the day – 16 pounds, 9 ounces – but it was not enough to overtake him. Vinson finished second with a four-day total of 48 pounds, 15 ounces worth $9,832.

Vinson spent his week in the lower end of the Chattahoochee River around the Man-made Island area throwing rattling, lipless crankbaits to clumps of grass along the river channel.

“I was using a 1/2-ounce Rat-L-Trap in copper and a 5/8-ounce Yozuri Rattlin’ Vibe in red,” Vinson said. “I switched to 15-pound-test fluorocarbon today to help the bait get down in the grass better.

“The main thing for me was to keep covering water,” he said. “Making long casts and ripping the trap up out of the grass was the key.”

Tony Davis of Williston, Fla., finished third with a four-day total of 35 pounds, 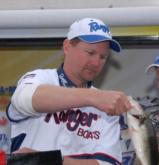 Davis spent his week Carolina rigging 10 to 12 feet of water in the lower end of Spring Creek.

His primary plastics were a Zoom lizard and Trick Worm in watermelon color.

“These were just classic staging breaks in front of spawning bays,” Davis said of his best areas. “It was never really fast and furious, just a slow and steady bite.”

Cox fished in the Paramore Landing area of the Chattahoochee River during the first three days, pitching a 4-inch Yum Megatube in green-pumpkin with a 1/2-ounce tungsten Penetrator weight to reed lines.

Today his pitching water muddied up so he adapted by fishing grass flats in the lower Chattahoochee with a 1/2-ounce Rat-L-Trap in a firetiger color.

Lonnie Oneal of Valdosta, Ga., finished fifth with a four-day total of 33 pounds,

Oneal spent most of the week fishing backwaters off the Chattahoochee River. He pitched a Stanley jig teamed with a Zoom Speed Craw to matted duckweed for a majority of his early-round catches.

Today, the water dropped in his primary area, and he was concerned about not being able to get out of his area.

“From there, I ran down to the main lake and started fishing a Rat-L-Trap around grass points,” he added.

Rounding out the top 10 pros at the Stren Series Southeast Division event at Lake Seminole: