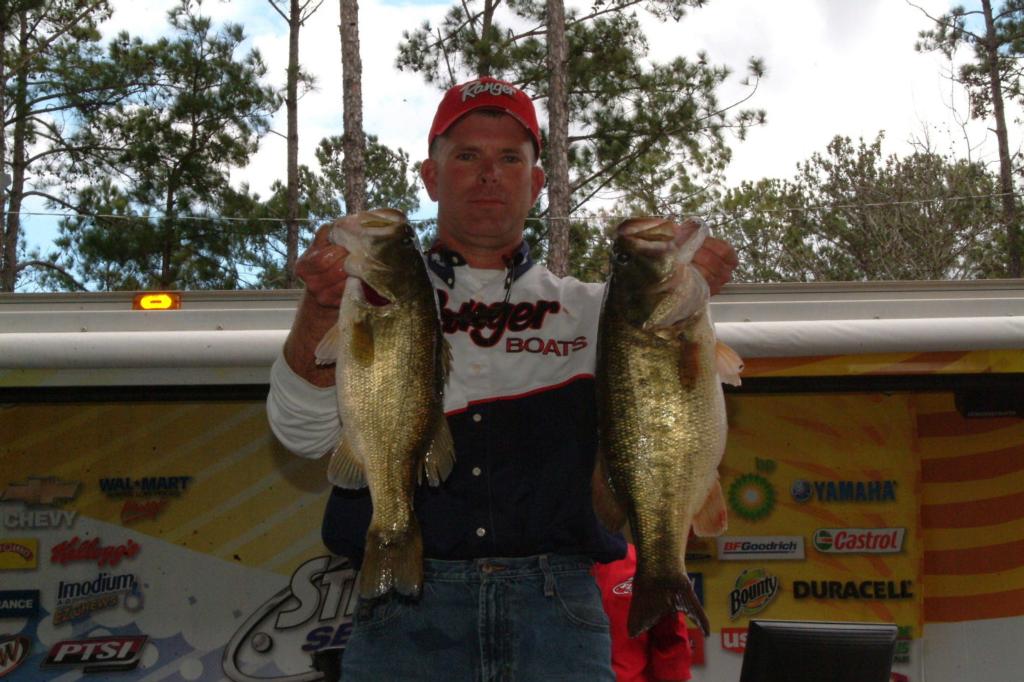 JASPER, Texas – Though only one competitor broke the 20-pound barrier Wednesday, it was still the kind of day that gives Sam Rayburn its reputation, as 180 Stren Series Texas Division pros and 154 co-anglers caught nearly 2,200 pounds of bass on day one. Leading them all is Laredo, Texas, pro Charles Haralson with a first-day catch of 20 pounds, 2 ounces.

In the chilly days leading up to the tournament, Sam Rayburn’s fishability seemed questionable due to unusually high water levels and atypically cool water temperatures. But a warming trend just three or four days before the tournament began raised the water temperatures about 6 degrees, and judging by today’s numbers, the bass certainly responded.

However, temperatures are supposed to cool off again Friday, and with the heaviest four-day stringer winning the tournament, anglers held nothing back today, and the results prove it. It took more than 16 pounds to be in the top 10 on the pro side, and the heaviest bass of the day, caught by co-angler Matt Purgahn, tipped the scales at 7 pounds, 11 ounces, followed closely by a 7-5 caught by pro Art Garza.

Pro leader Haralson understandably wouldn’t reveal much about his technique, but the pros behind him should take note. In only two career FLW Outdoors events, he’s finished in the top 20 both times with a career high of eighth place. Even though his experience on Sam Rayburn is limited, he nonetheless has a 1-pound, 10-ounce lead in a tournament where literally every ounce counts.

“I just found the fish in practice,” he said. “I didn’t know what all was there. It’s a pattern I’m fishing. I stayed in one place all day long.”

Haralson is not the only angler who sang the virtues of sitting still. On a lake the size of Rayburn, finding something good and sticking with it seems to be the wise course of action.

“On a lake this big, you’ve got to pick a spot and catch the best it will give you,” he said.

Haralson, who has only fished Rayburn maybe three or four times, practiced for three days and found a pattern he says can go the distance. His five-bass limit could and should have been even heavier were it not for a few lost fish.

“I culled three times and had four on that I didn’t catch,” he said.

Johnston sticks with what works 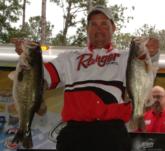 Just a week and a half ago, pro Andy Gaia won a Wal-Mart Bass Fishing League event here on Sam Rayburn using a French crankbait called a Sebile. Today, pro Stephen Johnston of Hemphill, Texas, fished a Sebile and brought in 18 pounds, 8 ounces to sit in the No. 2 spot on day one.

“The bait I’m throwing is the same bait the guy that won the BFL was throwing,” Johnston said. “A lot of areas have a lot of pressure, and I think throwing something different helps.”

Johnston caught eight keepers today, culling them down to a limit that gives him a 13-ounce advantage over his nearest competitor.

“I don’t know if I can catch 18 pounds every day, but I think I can catch a limit,” Johnston says of his chances over the next three days.

For the record, Gaia ended day one of this week’s event in 37th place with a limit weighing 11-9.

For No. 3 Durham, persistence pays

For Texas fishing hotshot Tommy Durham of Waxahachie, the key to catching his 17-pound, 11-ounce day-one limit was slowing down and being patient.

“It’s probably just persistence,” he said of his day-one bounty. “I didn’t have many bites in practice – probably 13 in four days. I tried to fish extremely slow and tried not to run around.”

Like everyone else, Durham was trying to solve the mystery of where these confused fish are located. With the crazy weather patterns, the fish don’t know if they want to stay deep or move up.

“The fish are in transition,” he said. “They’re trying to move shallower. I just hoped that some would come to me. It was better today, and with any luck, it will be better tomorrow.”

Cecil, Newberry round out top five

If it’s a tournament in Texas, chances are good that Russell Cecil of Willis is a contender, and today was no exception, as Cecil brought in a limit that weighed 17 pounds, 4 ounces, good for fourth.

Behind him in fifth is another well-known Texas pro, Dicky Newberry of Houston, with a limit weighing 17 pounds, 3 ounces.

Rounding out the top 10 pros on day one at Sam Rayburn:

Topping the list of co-anglers after day one is Valencia, Calif., angler Jacques Fleischmann, who brought in a five-bass limit weighing 15 pounds, 5 ounces to lead his division by 6 ounces.

Those numbers aren’t too shabby for a guy fishing his first tournament in Texas, and he posted that weight using a technique that’s more well-known in his native West.

“I had a great day,” Fleischmann said. “I brought a California style of fishing out here – I’ve been drop-shotting.”

Indeed, Fleischmann drop-shotted an oxblood and red-flake Roboworm to bring in a limit. He’s hoping he can drop-shot his way into the finals.

“I think I could catch a couple of fish tomorrow, and that’s what it takes every day,” he said.

n second place on the co-angler side with 14 pounds, 15 ounces is Travis Darley of Del Rio, Texas, and just half a pound behind him in third is Clint May of La Porte, Texas, with a limit weighing 14 pounds, 7 ounces.

Ending the day in the fourth spot is Kerry Barnett of Waldron, Ark., with a limit weighing 13 pounds, 5 ounces, and just 8 ounces behind him is No. 5 Waylin Ott of White Oak, Texas, with 12 pounds, 13 ounces.

Rounding out the top 10 co-anglers after day one on Sam Rayburn:

Day two of Texas Division competition on Sam Rayburn begins at 7 a.m. Central time as anglers take off at the Umphrey Family Pavilion, located off Highway 255 West in Sam Rayburn.