Dombrowski dials in day one 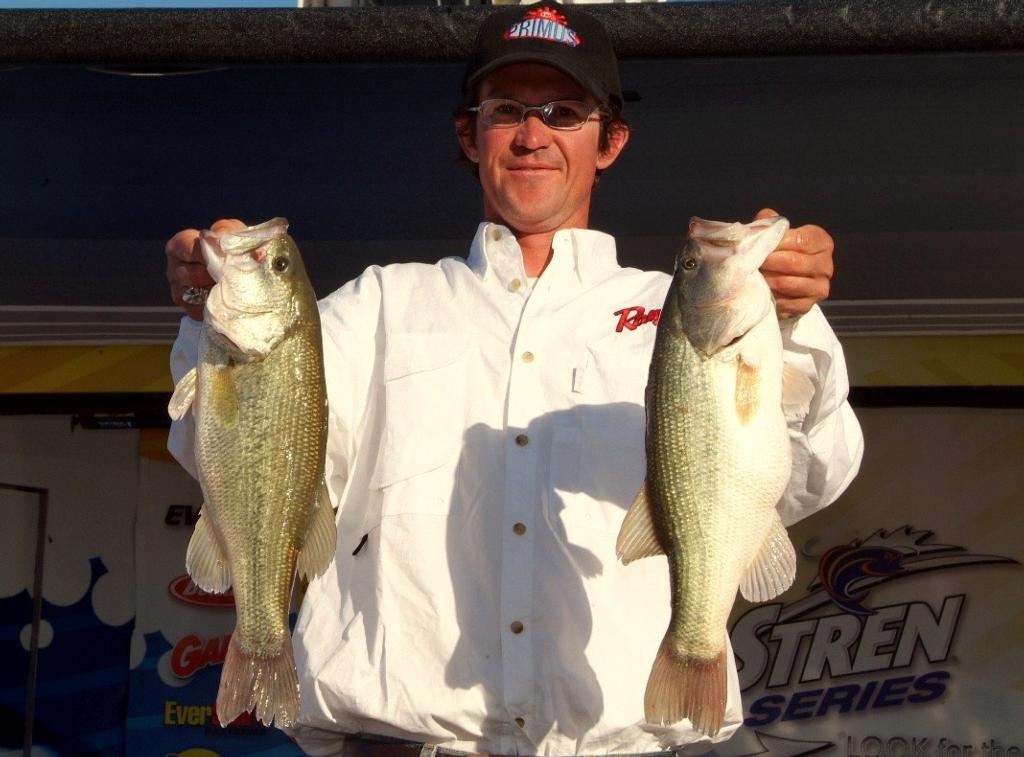 HENDERSON, Nev. – There was nothing fancy about the fishing nor anything especially characteristic about the first day of Stren Series Western Division competition at Lake Mead. Maybe that’s why Alex Dombrowski, a younger pro out of Duvall, Wash., led all competitors by utilizing a strategy he called “blind, dumb luck.”

“It was pretty tough and slow out there,” he said. “I threw jigs, drop-shots and worms most of the day and pretty much just stumbled into a couple of good ones.”

Dombrowski’s leading sack weighed 12 pounds, 9 ounces and positioned him 6 ounces ahead of second-place Jeff Michels in the Pro Division. Dombrowski’s five-bass limit – all largemouths – was one of 14 limits weighed in by the pro field.

The leader said he spent a lot of time driving around Lake Mead working points and pockets, looking for nothing in particular. He caught fish – seven keepers in all – in water anywhere from 8 to 35 feet deep.

“I’ve been in and out of coves and pockets, just running all over the lake,” he said. “I was totally just covering water and getting lucky. I caught them sporadically throughout the day, though there was a decent mid-morning bite.”

Dombrowski, who started the 2007 Western Division campaign well with a 12th-place finish at Lake Shasta, seemed a little bemused by his fast start here at Mead.

“In practice, I was only getting two or three bites a day, so I think this was just luck. I guess we’ll find out tomorrow,” he said.

A front is forecast to move through the area Thursday, which could kick up some wind on the desert impoundment. If that happens, Dombrowksi said he’d probably adjust to some heavier baits.

“That’s all you can do: adapt or disappear,” he said.

Michels finds them in a crowd

He said he caught his keepers, including a 4 1/2-pound kicker largemouth, on a drop-shot with 4-pound fluorocarbon line and a 4 1/2-inch finesse bait.

“Being patient and having light line is the key,” Michels said. “But it’s pretty scary when you’re hooking 4 1/2-pounders on 4-pound fluorocarbon.”

He said that he caught the bulk of his fish in a “community hole.”

“There are a lot of people fishing the same spots I am. In one place I saw eight boats go down the bank before I got there,” Michels said. “But at a tournament like this, you’ve just got to put the blinders on and fish like nobody’s there. Hopefully, people will start to clear out and the fish will keep biting.” 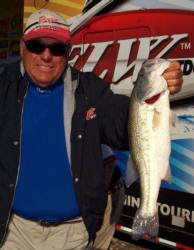 “I missed a really big fish, otherwise that would have been 15 pounds,” he said. “I caught 19 pounds here in a tournament two weeks ago, and I should have weighed in 15 today.”

Ward tried throwing a drop-shot early, but switched over to reaction baits after the finesse presentation yielded no bites.

“The only thing wrong was that the last two nights were really cold,” he said. “The fish didn’t really bite well until 11 or 12 o’clock.”

Ward, haunted by that lost kicker, seemed anxious for the opportunity to put down the reaction baits and go with the drop-shot in Thursday’s action, but it will all depend on the weather.

“These fish are hitting and running with the bait underneath the boat faster than you can say `Jack Robinson,'” he said. “It’s hard to keep them on.” 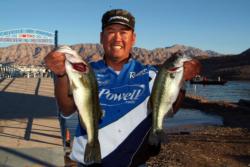 Tom Matsunaga of Gardena, Calif., placed fourth for the pros with a limit weighing 11 pounds, 11 ounces.

“I caught them on worms, jigs, sight-fishing, everything,” he said. “I’ll just take five a day; that’s all I want.”

Clint Johanson of Benton City, Wash., rounded out the top five in the Pro Division with a limit weighing 11 pounds, 7 ounces.

“I’m catching fish that are kind of staging back in bays,” said Johanson, who caught fish on a 4-inch, Texas-rigged, purple worm on 10-pound line in about 7 feet of water. “They’re on the sunny side of the bank. In the afternoon, they come up a little shallower.”

Like many, Johanson said patience is the key at Mead this week.

“I’m just letting it sit there and soak for five or six minutes per cast,” he said. “A lot of the bites I got, I just kept the rod tip underwater, keeping a little pressure on it, and it would just go `dwing.'”

Rounding out the top 10 pros after day one at Lake Mead:

Each of the top 10 pros caught limits Wednesday.

Jesse Slaton of Klamath Falls, Ore., caught the $211 Snickers Big Bass for the pros with a 5-pound, 2-ounce largemouth.

Tom Pryor of Kingman, Ariz., caught the only limit in the Co-angler Division and narrowly led the field with 9 pounds, 12 ounces. He fished with pro big-bass winner Slaton Wednesday.

“We were on them, and it looked good today,” Pryor said. “We kind of figured out what they were eating.”

Richard Garlock of Alexandria Bay, N.Y., placed second for the co-anglers with a three-bass weight of 9 pounds, 11 ounces. 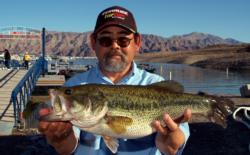 The most impressive single catch of the day belonged to Uyeda, who wowed the crowd and won the $113 Snickers Big Bass award for a largemouth that weighed 6 pounds even.

Day two of Western Division competition at Lake Mead begins as the field of 127 boats takes off from Callville Bay Marina at 6:30 a.m. Pacific time Thursday.