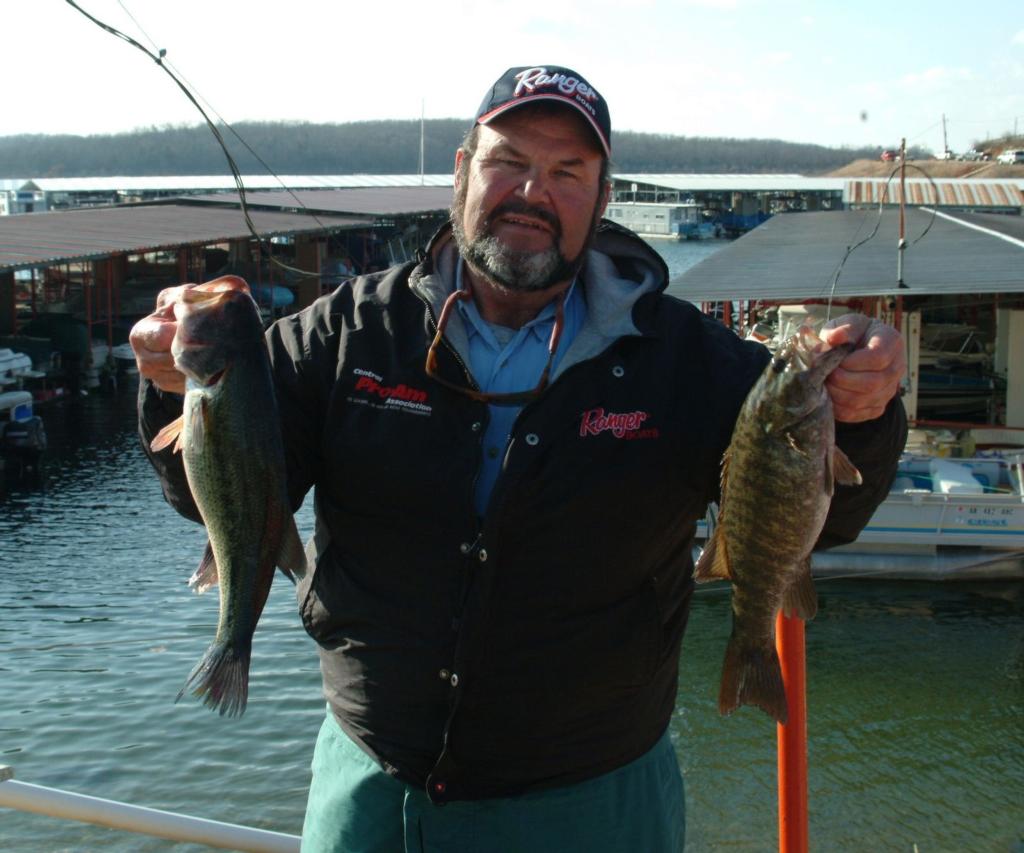 BULL SHOALS, Ark. – Severe thunderstorms, including a tornado touchdown in nearby Caulfield, Mo., gave way to blue-bird skies and roaring winds Thursday morning. The theme on day two of the Stren Series Central Division event on Bull Shoals Lake was change. Tactics changed, conditions changed, and several of the names at the top of the leaderboard changed.

Weather-wise, day two was a peculiar one as a massive cold front ripped through the Ozarks. The high temperature was reported at 6 a.m. shortly before the storms moved out. By 8 a.m., the thick, ominous clouds had completely vacated the region. Wind gusts on the backside of the front reached 40 mph, but they were no match for pro leader Randall Hutson.

Hutson was the one name that didn’t change. For the second consecutive day, the Washburn, Mo., pro sacked a double-digit limit despite a tough bite. His total weight would have been considerably greater if not for two 3 1/2-pounders that got off at the boat. Still, his limit Thursday weighed 12 pounds, 5 ounces and pushed his two-day total to 28-3.

“I like it; I’m tickled to death,” he said. “But I did struggle in that wind today.”

Much like the rest of the field, Hutson was laboring until he made a subtle change. At 11:30 this morning, he moved from 4 feet of water down to the 8- to 10-foot zone. There he was able to dial in and fill his limit, which consisted of three largemouth bass, one smallmouth and one spotted bass.

“I fish these areas all the time,” said Hutson, attributing his success to local knowledge. “I know exactly what the bottom looks like.”

His key bait on day two was once again the Smithwick Rogue jerkbait, but he also caught fish on a Lucky Strike finesse jig and a crankbait. Hutson said his main area is located roughly an hour from the Bull Shoals Lake Boat Dock, but it took nearly two hours to get back in today’s blustery weather. Clearly off to an awesome start, the veteran pro isn’t about to look too far ahead.

“I’m just halfway there. A lot of things can happen. Plus, I’m beating my fish up pretty good, so I’m a little worried.”

Fleetwood moves up to second 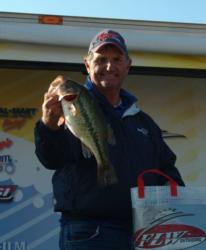 For most of Thursday’s weigh-in, it appeared no one would pose a serious threat to Hutson. In fact, sixth-place pro Ben Kurtz’s two-day total of 17-14 was in second for the majority of the weigh-in. That was until pro Tim Fleetwood hauled the heaviest limit of the day to the scale. Fleetwood of nearby Forsyth, Mo., quickly overtook second with a five-bass limit weighing 14 pounds, 8 ounces and a two-day total of 26 pounds, 12 ounces.

Simply put, day two wasn’t enjoyable for anyone who was on the water. But for Fleetwood, his fish bit a lot better today than yesterday. On day one, he struggled just to get five bites. Today, his Tim Hughes custom jerkbait was getting bit early and often. And it wasn’t just bass biting his lure, as a 6-pound walleye took a crack at it as well as a crappie that weighed nearly 2 pounds.

While the pro leader is admittedly beating up his best area, Fleetwood claims he hasn’t even fished his best spot yet. He meant to go there today, but instead decided to just stay out of the wind.

“Hopefully I get to go there tomorrow,” he said. “During one day in practice, I caught 14 keepers there.” 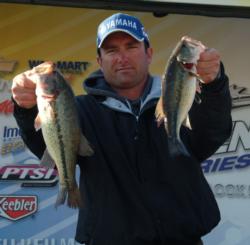 Jerry Weisinger was one of only 11 pros to catch a limit on day two. The Wyandotte, Okla., native also caught a five-bass limit on day one. Together they weighed 22 pounds, 11 ounces and put Weisinger in third place with one day remaining in the opening round.

“I started in a different place today than yesterday,” said Weisinger. “I was catching a lot of Kentuckies early, but at about 1 p.m., I changed areas.”

It proved a wise move, as he caught three keeper largemouths and was able to cull a spot with each one of them. His key baits were a jig, a Wiggle Wart crankbait and the increasingly popular Smithwick Rogue jerkbait. Covering a lot of water, each bait was presented in 12 feet of water or less.

“There’s not a lot of fish that have moved up, but the ones that have will bite. As long as I have a little bit of wind, the sun can come out as much as it wants.”

Byler and Evans tie for fourth

Local pro Jim Byler of Mountain Home, Ark., caught only two bass Thursday, but they weighed 6 pounds, 3 ounces. Together with his day-one limit of 11-12, Byler is tied for fourth place with a two-day total of 17-15. Despite only catching two keeper-sized bass, Byler actually moved up five places in the standings. 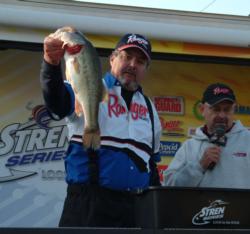 ” border=”1″ align=”right” />Joining Byler at No. 4 is Benton, Ky., native Jeff Evans. Evans caught four keepers today that weighed 10 pounds, 9 ounces to push his total weight to 17 pounds, 15 ounces. His kicker weighed 4 pounds, 5 ounces and was caught on a Megabass jerkbait. Evans said he also caught eight bass that were just short of the length limit. 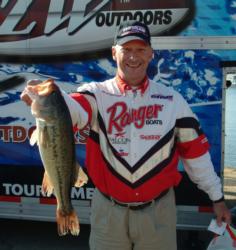 Mike Ellenstein of Newburgh, Ind., has caught only one bass over the first two days of Central Division competition. That lone fish weighed 5 pounds, 3 ounces and earned Ellenstein the Snickers Big Bass award in the Pro Division. The day-two lunker netted him $250.

Rounding out the top 10 pros after day two on Bull Shoals Lake:

Shay boats one, hangs on to co-angler lead 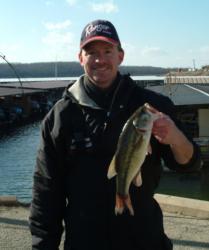 Day-one leader Ed Shay of Chesterfield, Mo., caught one bass on day two that weighed 2 pounds, 12 ounces. That lone largemouth pushed his two-day total to 12 pounds, 14 ounces and gave him a 3-pound, 14-ounce lead in the Co-angler Division.

Shay said he only received one bite all day, which naturally was on a Smithwick Rogue jerkbait.

Michael Waltrip, the fisherman and not the NASCAR driver, caught two chunky bass that weighed 5 pounds, 6 ounces. The native of Fayetteville, Ark., moved into second place with a two-day total of 9 pounds even.

Tyrone Phillips zeroed yesterday but rallied in a big way today. With only two fish, the Land O’Lakes co-angler moved all the way up to third place in his division. His two largemouth bass weighed 8 pounds, 13 ounces, which was the biggest sack of the day among the co-anglers. The larger of the two 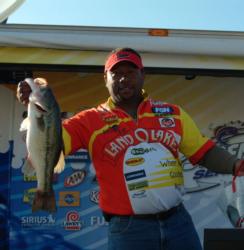 weighed 5 pounds even and was the Snickers Big Bass. The Little Rock, Ark., angler earned $131 for his catch.

Lynn Jones of Hernando, Miss., moved up to fifth place after catching two bass that weighed 4 pounds, 1 ounce. Combined with his day-one weight of 4-5, his total now stands at 8 pounds, 6 ounces.

“I can’t wait until tomorrow,” said Jones, who threw both plastics and crankbaits.

Rounding out the top 10 co-anglers after day two on Bull Shoals Lake:

The final day of the opening round begins at 7 a.m. Central time at the Bull Shoals Lake Boat Dock.