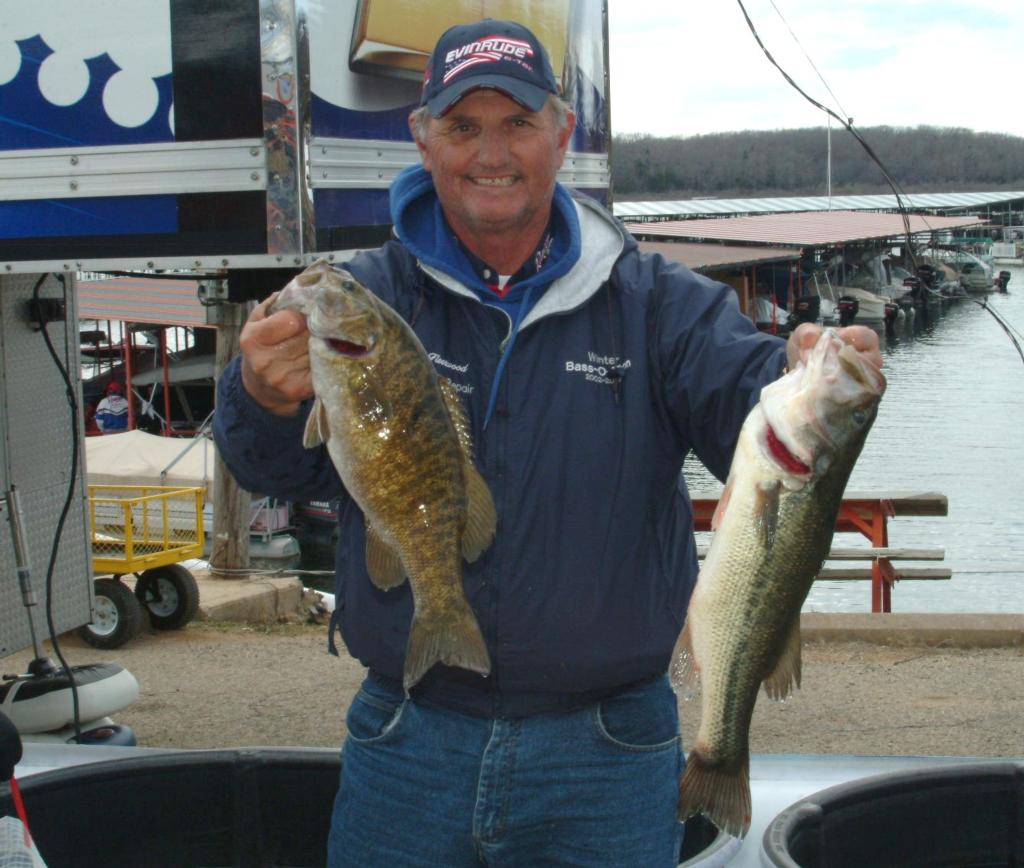 BULL SHOALS, Ark. – Bass fishing 101 says that the second day of a cold front is the toughest. But Bull Shoals is taking the term “tough” to a new level. Only 10 pros caught a limit Friday as the opening round of the season-opening Stren Series Central Division event came to a close. Only one angler, however, has caught a limit each day of competition.

No more than 236 bass that weighed 475 pounds made it to the scale Friday. Five of those were caught by local pro Tim Fleetwood. Fleetwood didn’t just catch five that measured, he crushed the competition with five that weighed 14 pounds, 7 ounces. At the conclusion of the opening round, Fleetwood’s total stands at 41 pounds, 3 ounces. With one day of competition remaining, the Wal-Mart BFL veteran has opened up an unthinkable 9-pound lead in the midst of a miserably tough bite.

That Fleetwood is having success on Bull Shoals Lake is no surprise. In his career he has 15 top-10 finishes, 11 of those coming in the Ozark Division of the BFL. This is, however, his first Stren Series event since 1999.

“I did a lot of moving around today,” he said. “I made some real good decisions. I caught a good fish everywhere I went.”

To quantify what “moving around” meant to Fleetwood, the Forsyth, Mo., pro said he fished six distinct areas. At each area, he continued to use a Tim Hughes custom jerkbait.

Yesterday Fleetwood mentioned that he would probably visit his best area today. While that looked like the case, it wasn’t. Even though it is hard to believe, Fleetwood claims he still hasn’t touched his best water. This morning, there were several boats on his first area, but instead of panicking, he adjusted. He also lost a 6-pounder that rolled right at the net. Again, rather than being rattled, he stay focused on the next bite.

“I’m kind of in the zone right now. I hope it continues tomorrow.”

Not only did Fleetwood crush the bass, he also swears he caught a walleye that weighed nearly 20 pounds. This is not a misprint; Fleetwood absolutely insists he caught a walleye in the 20-pound range. Although rare, Bull Shoals Lake is no stranger to trophy walleyes. In fact, the current world record was caught on Greers Ferry, also located in the Ozark region of Arkansas. For some perspective, that fish would be a record in most Midwestern states. Walleyes aside, Fleetwood has a little redemption to take care of tomorrow.

At the 1999 BFL All-American, he was 3 pounds short of victory. Tomorrow he’ll have a chance to claim win No. 1.

“I’m not thinking about winning it. I’m not going to think about it tomorrow when I’m fishing. I’m trying to stay focused like I have the past three days. If we have wind again tomorrow, I think I can catch them. With this cold water, this is my favorite time of year.” 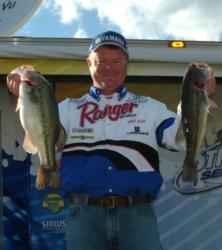 From one deep Arkansas impoundment to another, pro Mark Rose once again finds himself in second place. Rose also grabbed a second-place FLW Tour finish at the 2006 Wal-Mart Open on Beaver Lake. While he won’t receive $100,000 for second place in this event, he’s happy with his performance.

It seems that Rose is the only pro in the top 10 who is not using a jerkbait as his primary bait. Instead, he’s working a brown 3/8-ounce jig in 10 to 15 feet of water off a bluff wall.

“Something is triggering them to bite at a certain point. You’ve just got to be focused for when it happens. You can’t spend the whole day running around.”

That pattern worked well on day three as Rose caught the second-heaviest limit of the tournament. His five bass weighed 15 pounds, 9 ounces and pushed his three-day total to 32-4.

Yesterday’s pro leader Randall Hutson claimed he was beating up his fish pretty good. Today he proved it as the Washburn, Mo., pro only managed two keeper bass. Compared to the first two days in which he caught limits of 15-14 and 12-5, he struggled; but two fish on a lake this tough really isn’t bad.

“The wind changed and pushed them out of the pockets,” he said. “I don’t know what I’m going to do tomorrow. I may struggle again.”

His two bass, which were caught on a Smithwick Rogue jerkbait, weighed 4 pounds even and gave him an opening-round total of 32 pounds, 3 ounces. 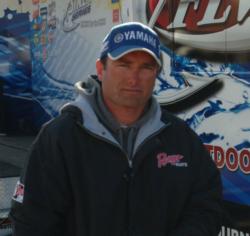 Besides Fleetwood and Hutson, Jerry Weisinger was the only pro to catch a limit each of the first two days. That streak ended Friday as the up-and-coming pro from Wyandotte, Okla., caught only three bass.

“I don’t know what happened,” Weisinger said. “I think the pockets that I’m fishing are too cold.”

Weisinger is making a long run to get his fish. In fact, he said his primary spot is located on the Missouri side of the lake. Once he arrives, he pulls out a Smithwick Rogue jerkbait and casts it toward the bluffy banks.

“I really thought I was going to catch them today. I missed two fish; I should have come in with a limit.”

While his fish were more aggressive yesterday, the young pro still managed three bass that weighed 5 pounds, 4 ounces. Two of those fish were spotted bass, one a largemouth. With one day remaining, his total weight stands at 27-15. 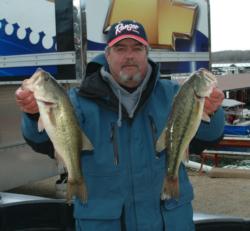 In the fifth spot is Benton, Ky., pro Jeff Evans, whose 9-pound, 12-ounce day-three catch brought his combined total to 27 pounds, 11 ounces. Evans, a veteran competitor with 14 top-10 finishes to his name, blew an engine today and wasn’t able to fish past 11:30 a.m. Still, the Kentucky and Barkley lakes specialist is having a heck of a tournament.

Much like Weisinger, Evans is making a 50-mile run each way.

“It’s absolutely killing my back. Plus my shoulder is about to fall off from casting so much.”

Evans is throwing a Megabass jerkbait on a mile-long stretch of creek edges.

“I’m the only cancer survivor in the top 10,” added Evans, who only has one lung. “I’m just really excited. I’m pretty emotional about this.”

Rounding out the top 10 pros who will compete in tomorrow’s final round: 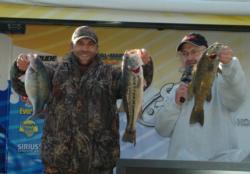 Day three saw considerable movement in the Co-angler Division. Local fisherman Steven McFarland jumped from sixth to first via a 10-pound, 12-ounce catch. His sack, the heaviest of the tournament for his division, was attained with only three bass – one smallmouth, one largemouth and one spot.

Those three fish raised his combined total to 18 pounds, 11 ounces. With one day remaining, the Mountain Home, Ark., angler has nearly a 3-pound lead. Interestingly, McFarland seems to be the only person who has found success deep.

“I’m fishing brush and heavy rocks in 40 feet of water,” said McFarland, who used a 2-inch grub and a jerkbait. “Man, I’m so excited, I’m shaking. Tomorrow I’m going to go and fish my heart out.” 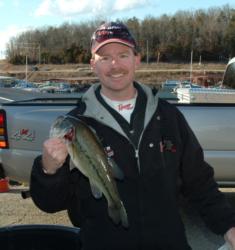 Yesterday’s No. 1, Ed Shay of Chesterfield, Mo., fell to the second spot today after catching one bass that weighed 3 pounds, 1 ounce. That lone largemouth bumped up his grand total to 15 pounds, 15 ounces.

Shay caught the fish on a Smithwick Rogue jerkbait, the same bait he used on day one and on day two. He also tried a 5/16-ounce Eakins jig, but he never got a bite with it.

“If I can get three bites tomorrow, I feel pretty good about my chances,” Shay said.

“It’s been great,” he said. “My pros have been exceptionally awesome.” 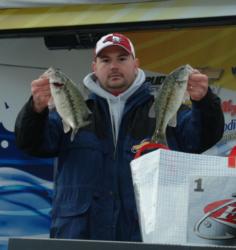 While he describes fishing as a passion, this tournament marks the first major event of his career. It’s especially important to him because he grew up in the area.

“I’m catching my fish on a crankbait. I haven’t caught a fish yet this entire week after 11 a.m. But tomorrow could be an entirely different ballgame. I’d love to win it, but anything beyond a top-10 is icing on the cake.”

Steve Amata of Nixa, Mo., caught four bass that weighed 7 pounds, 3 ounces, which was the second-biggest sack of the day among the co-anglers. That impressive bag qualified Amata for the final round in fourth with a three-day total of 13-6.

Barney Moore rallied after zeroing yesterday with three bass that weighed 4 pounds, 5 ounces. The Johnston City, Ill., native finished the opening round with 10 pounds, 9 ounces, which was good enough for fifth place.

Rounding out the top 10 co-anglers who will compete in tomorrow’s final round: