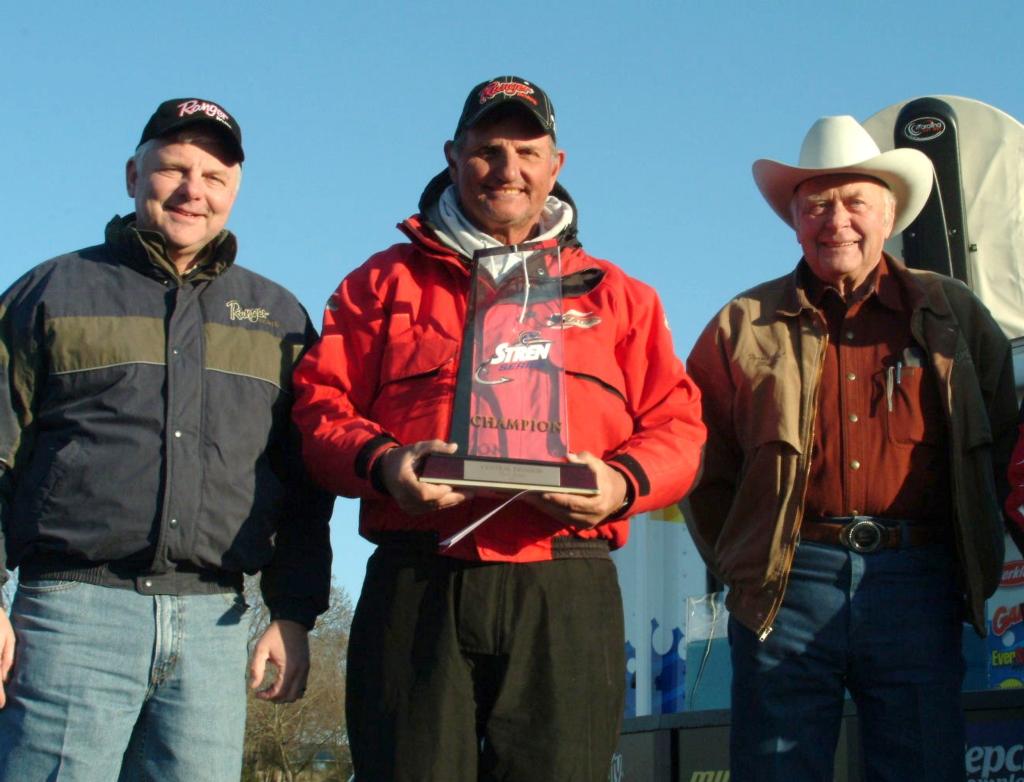 BULL SHOALS, Ark. – With 16 top-10 finishes to his name, Tim Fleetwood is a seasoned FLW Outdoors professional angler. Fourteen of his top-10 finishes have come from the deep, clear impoundments of the Ozark region. Despite an admirable local resume, he’s finished in just about every position in the top 10 except for one: first.

A determined Fleetwood changed that today, and he did so amid brutal conditions that included heavy snow showers and westerly winds gusting up to 40 mph. Fishing in his first Stren Series event since 1999, Fleetwood made an ultratough Bull Shoals Lake look like child’s play.

This event was, to some extent, a redemption tournament for Fleetwood. At the 1999 BFL All-American, he officially finished fourth, less than 4 pounds shy of victory. What the official results don’t say is that the tournament, held on the Mississippi River near Onalaska, Wis., was a no-cull event. Fleetwood had his fifth fish stuck several times, but he decided to chuck it back and fish for the win. Had he weighed a fifth fish, he would have been just ounces away from the most prestigious title in weekend angling.

There were no crucial decisions like that to be made today, as Fleetwood went into Saturday’s final round with nearly a 9-pound lead. With his Tim Hughes custom jerkbait leading the way, the Forsyth, Mo., pro caught five fish for 11 pounds, 9 ounces and was able to keep hard-charging Mark Rose at bay.

“I feel like I’m still out on the water,” he said. “I was so focused all week, it hasn’t really sunk in yet. I was always thinking about what to do to get my next bite.”

Fleetwood was the only pro who was able to catch a five-bass limit each of the four days of Central Division competition. Fittingly, he had to adjust today as the brutal conditions wouldn’t allow him to reach his best area.

Running north this morning, instinct told Fleetwood to stop and fish a small cove just south of Big Creek. The detour turned out to be a profitable one as he ended up spending the whole day there.

“I felt like if I could just catch a limit, I could win this thing. When I put that fifth fish in the boat at noon, I thought I had it.”

In addition to dominating the bass this week, Fleetwood put a hurting on the Bull Shoals walleye population. Yesterday the pro winner caught a walleye that registered 19 pounds, 5 ounces on his digital scale. Although rare, Bull Shoals Lake is no stranger to trophy walleyes. In fact, the current world record was caught on Greers Ferry, also located in the Ozark region of Arkansas. For some perspective, Fleetwood’s fish would be a record in most Midwestern states, and was only 3 pounds short of the current world record. He wanted to keep the fish at the time, but it wouldn’t fit in his livewell, plus he was plenty busy with the tournament at hand. 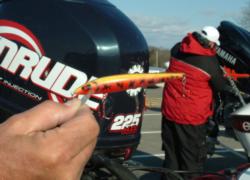 While he fished several areas, they were all located on the extreme north end of the lake. Day four was the first day he fished near Big Creek. At all his areas, Fleetwood focused on suspended fish located near channel swings. The specific colors of his Tim Hughes custom jerkbait were mainly red and orange. The bait, which included spots of chartreuse and flake, was actually designed by Fleetwood himself. After receiving the specifications, Hughes airbrushed and finished the bait, which was presented on 8-pound-test Stren monofilament.

Rose came after Fleetwood with guns blazing today, turning in the best catch of the day – 14 pounds, 8 ounces – but his day-one performance ultimately came back to haunt him. Rose, who is from Marion, Ark., finished second with a four-day combined weight of 46 pounds, 12 ounces worth $13,301. 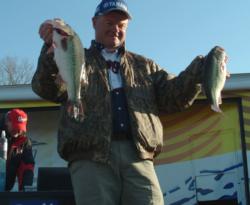 For most of the opening round, Rose threw a brown 3/8-ounce jig in 10 to 15 feet of water. Late in the day yesterday, he discovered that he was just a few feet from the ultimate honeyhole. Accidentally backing off the bluff wall he was fishing, he suddenly saw a flurry of activity on his electronics.

After changing from the finesse jig to a football-head jig, he immediately began to reap the benefits. On day four, as his snow-filled Ranger boat idled up to that same area, Rose wasn’t sure if he was going to catch them again.

“Once I put my line in, it was every cast for about an hour,” he said. “It seemed like they were all 3-pounders though. I never really could get that big bite.”

Had Rose made the change earlier in the tournament, it could possibly have been enough to overcome the 6-pound difference between Fleetwood and him. 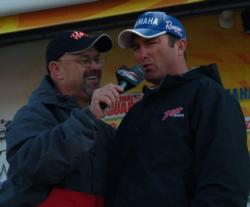 Pro Jerry Weisinger rebounded nicely on day four with a five-bass limit weighing 10 pounds, 8 ounces. In fact, day three was the only day the Wyandotte, Okla., pro failed to bring a limit to the scale. His total weight spanning four days was 38 pounds, 7 ounces. That placed him third and earned him a check for $7,471.

Weisinger’s primary area was located on the Missouri side of the lake and consisted of steep, bluffy banks. His main lures this week were a chrome and blue Smithwick Rogue jerkbait, an Eakins jig and a Wiggle Wart crankbait.

“I think the pockets that I was fishing were getting too cold,” he said.

After taking last year off to refresh and spend time with his family, Weisinger’s 2007 season is off with a bang.

Randall Hutson of Washburn, Mo., finished fourth with a four-day total of 36 pounds, 8 ounces worth $6,641. Hutson led each of the first two days of the tournament, but only caught four keeper bass over the final two days.

“I knew when the wind changed I was done,” said Hutson, who used a 4 1/2-inch Smithwick Rogue jerkbait and a Lucky Strike jig. “With the water being this cold, the fish wanted something real slow.”

The former Wal-Mart FLW Tour champion may not be a household name in professional bass fishing, but his accolades stack up against the best anglers in the sport. As proof, Hutson has accumulated over $450,000 in FLW Outdoors career earnings. His major accomplishments include an FLW Tour win on the Connecticut River in 1998, which at the time was the richest bass tournament in the history of the sport. His other major paydays have come in the Ozarks, a surprise to no one. He took second at the Wal-Mart Open on Beaver Lake in 2002 and again in 2003. Each of those tournaments earned Hutson $100,000.

FLW Tour veteran Larry Nixon of Bee Branch, Ark., finished fifth with a combined total of 36 pounds even. Fishing in the first Stren Series event of his career, Nixon earned $5,810.

He got there by improving his catch as the tournament progressed. It’s a rarity when one of the best anglers to ever pick up a rod and reel sneaks up on the competition, but that’s exactly what happened.

After only one and a half days of practice, Nixon struggled out of the gate with only 3-4 on day one. Each of the next three days he returned to form by catching double-digit limits. Like many of the other finalists, Nixon ran nearly 50 miles from the Bull Shoals Lake Boat Dock to get to his fish. He used both a green and gold Rapala Husky Jerk and a 6-inch Smithwick Rogue jerkbait to trigger his strikes.

The Chevy pro said he was able to fish shallower (7 to 10 feet) than most because his water had a darker stain to it.

“This morning it was so cold that I didn’t really want to go fishing, but I knew I better because I was on some good fish,” Nixon said. “But I had a ball at my first Stren. I just love these clear-water lakes.”

Rounding out the top 10 pros at the Stren Series Central Division event on Bull Shoals: