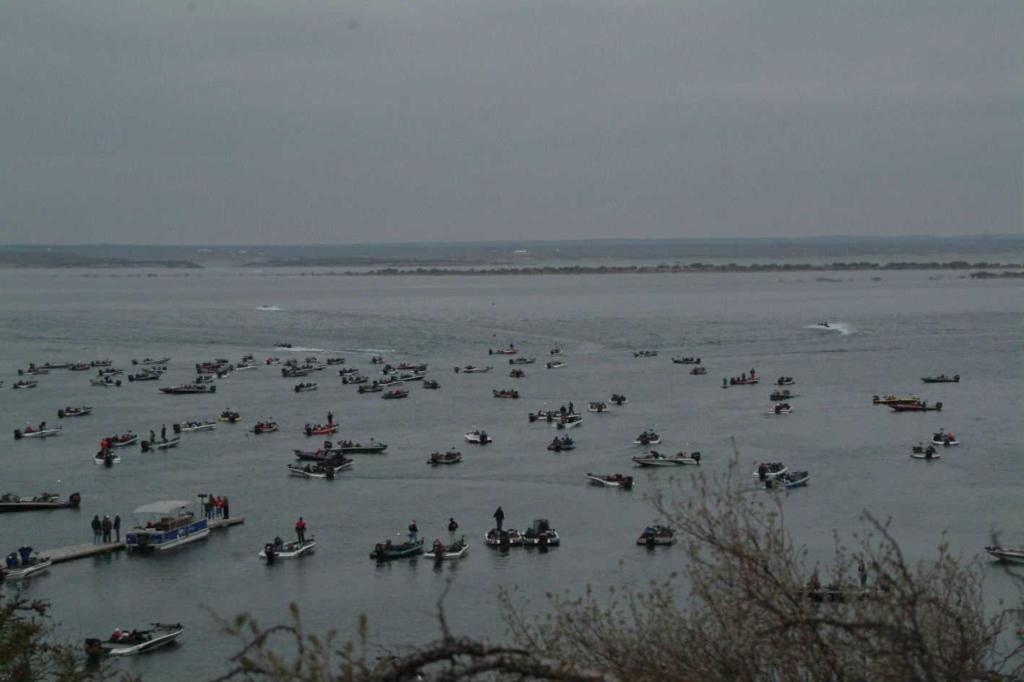 DEL RIO, Texas – It was cloudy and very windy with just the hint of a sprinkle this morning as Stren Series Texas Division competitors geared up for the highly anticipated start of this week’s event on Lake Amistad. And while such weather conditions might make for frustrating fishing on many other lakes, those lakes aren’t Lake Amistad.

This big-bass factory, which straddles the U.S./Mexico border, just might be considered the hottest bass lake in the country right now. Last year, the Stren Series visited Amistad in February and saw 20-pound stringers become the norm. This year, it should be as good or better for Stren Series competitors.

“The fishing is really good,” said pro David Mullins of Coppell. “I wouldn’t be surprised if several fish over 10 pounds were weighed in. I think we’ll see three-day totals of at least 60 pounds.”

The difference between this season’s Amistad event and last season’s is the spawn. In 2006, with the February time frame, fish were being caught off beds. This time around, that probably won’t be much of a factor.

“I don’t think sight-fishing will be a big deal,” Mullins said. “The spawn is pretty much over, and the beds are empty. But the fishing is still good.”

But what about the weather? Speaking for an Amistad preview earlier this year, Texas pro Wade Middleton called Amistad “The Big Windy” and said the only thing that could hurt the bite would be 20 mph winds. That could very well happen today, as the wind at takeoff whipped flags into a frenzy, and the current forecast is calling for 15 to 25 mph winds. However, not everyone thinks that’s necessarily a bad thing.

“The wind will probably turn the fish on,” Mullins said.

Pros will fish for a top award of $25,000 plus a $40,000 519VX Ranger powered by an Evinrude or Yamaha outboard and equipped with a Minn Kota trolling motor, Lowrance electronics and EverStart batteries if contingency guidelines are met. Ranger will award another $3,000 to the winner if he or she is a participant in the Ranger Cup program. If the winner is not a Ranger Cup participant, Ranger will award $1,500 to the highest-finishing participant in the contingency program. Yamaha will match 50 percent of Ranger Cup earnings if “Powered by Yamaha” guidelines are met.

Anglers will take off from Lake Amistad Marina, East Diablo Launch Ramp, located at Hwy. 90 West, HCR 3 in Del Rio at 7:45 Central time each morning. Wednesday, Thursday and Friday’s weigh-ins will also be held at the marina beginning at 3 p.m. Saturday’s weigh-in will be held at the Wal-Mart store located at 2410 Dodson St. in Del Rio beginning at 4 p.m. Takeoffs and weigh-ins are free and open to the public.