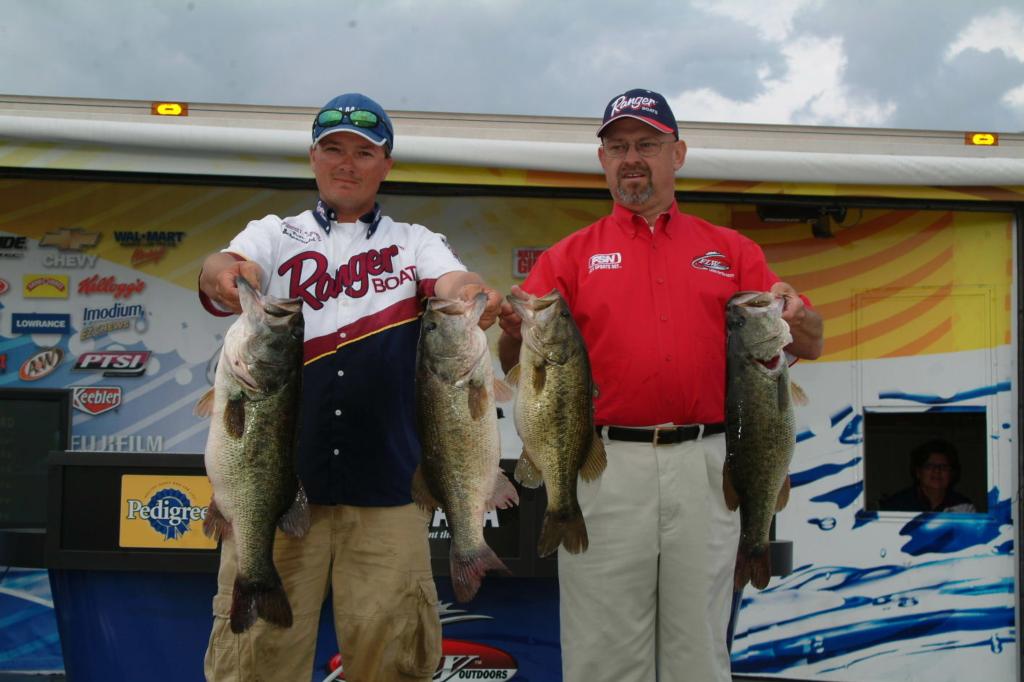 DEL RIO, Texas – Breaking records is becoming par for the course for tournaments on Lake Amistad. In a flashback to last year’s record-busting Stren Series tournament on the big Texas lake, competitors hauled in 4,400 pounds, 7 ounces of bass today, which is the heaviest Stren Series day-one tournament catch on record. In fact, that weight is fourth on the day-one list for all FLW Outdoors bass trails.

The tally is also 338 pounds, 7 ounces more than Stren competitors weighed in on day one of last year’s Amistad tournament, and the weight is No. 2 on the list of the heaviest single-day tournament catches in Stren Series history. No. 1 on the list? Last year’s day-two haul on this very lake.

As he approached the weigh-in stage, a shaking Schoonveld had to use both hands and quite a bit of his strength to hoist the bulging bag on the scales. His two weeks of practice paid off when he established a 7-pound, 1-ounce lead over his nearest competition in an event that hands the trophy to whomever catches the most weight over four days.

“I’m just covering water, catching them in different areas,” an understandably reticent Schoonveld said of his day-one success. “I’ve been here for two weeks practicing, and I narrowed some areas down.”

If there is one thing that can slow the bite down on mighty Lake Amistad, it’s the wind that tends to blow here – hard. Today was no exception, as winds blew as hard as 25 mph, frustrating some fishermen and helping others. For Schoonveld, the wind did not necessarily harm him or hurt him; he was more concerned about the effect it had on his competition, namely those watching the beds.

“The wind is helping,” Schoonveld said. “If the wind calms down, I get worried because of the sight-fishermen. I need enough wind to make it tough for the other guys.”

According to tomorrow’s forecast, Schoonveld will get his wind tomorrow with potentially nasty thunderstorms in tow.

When asked to explain his day-one dominance, Schoonveld simply replied, “I’m fishing something completely different than anybody else.” While that may be true, he was not alone when he caught most of his big fish today.

“I think it will work (all four days) as long as the two boats that saw me catching them aren’t there when I get there tomorrow,” he said.

Though not a local, Schoonveld has two top-10 finishes on Lake Amistad to his credit, both of them in the Wal-Mart Texas Tournament Trail.

Reneau adjusts to land in second

Many pros reported having better luck in practice than they did on day one, but Tim Reneau of Seguin, Texas, made the necessary adjustments and brought in a limit of bass today that weighed 27 pounds, 11 ounces to land in second place. Though he says the wind did not really affect his fishing, he certainly believes it may have affected a lot of other people’s.

Reneau had some tough luck this morning before hitting the mother lode in the early afternoon.

“At 12 o’clock, I had all 2-pounders,” he said. “Then I hit a stretch and caught them all in 30 minutes. I had to keep changing, going deeper and going shallower, until I found them.”

Reneau said he tried 10 spots where he caught them yesterday, only to find the fish had changed or moved. However, he said he and his day-one co-angler partner, Joey Teer, both caught bass weighing in the 8-pound range on the same cast.

In the No. 3 spot is Terry Owens of Aliceville, Ala., with five bass weighing 26 pounds, 12 ounces. Like many pros, Owens reported a slow bite on day one.

“It was fun,” he said. “I had a good practice and had been catching them pretty good, but it was not really fast. I had to cull out three times to get rid of my small fish. It took me two hours to catch a good one.”

The slow but fun day Owens described extended throughout the afternoon, as he reported catching his last fish at around 2 p.m.

Allen, Coleman round out top five

“We’re fishing a little bit different than most people – at least, I hope so,” Allen said. “I didn’t see anybody in the areas I’m fishing. I know the wind hurt me some, but I know it hurt other people too, so maybe it’s an asset.”

Behind him in fifth with a limit weighing 25 pounds, 12 ounces is Bob Coleman of Washington, Mo.

“It went pretty good – I didn’t lose any big fish, though I didn’t get as many bites as we have been getting,” Coleman said. “With the wind, it is hard to tell when you get a bite because I was not in protected areas.”

Rounding out the top 10 pros on day one at Lake Amistad:

So-called “professional co-angler” Michael Herron of Paris, Texas, caught a limit of bass today weighing 29 pounds, 5 ounces to step out in front of the Co-angler Division and put his own name in the record books: His catch is the second-heaviest single-day catch by a co-angler in Stren Series history.

Herron is certainly no stranger to success. In last year’s Stren Series Central Division, Herron finished in the top 10 three out of four times – including ninth place on Lake Amistad – and ultimately ranked fifth in co-angler points. With his hefty catch today, he opened up a 3-pound, 4-ounce lead over his nearest competition.

Herron fished with pro Bob Weaver today, and Weaver was no slouch himself with an 18-pound, 10-ounce limit that included two bass over 6 pounds.

Herron said the fish he was catching were shallow and thus responded better to the morning bite. However, Weaver said the two were not sight-fishing.

In second place on the co-angler side is Jimmy Ballard of Powderly, Texas, with a five-bass limit weighing 26 pounds, 1 ounce. That stringer included an 8-pound, 9-ounce bass.

“Today went great,” Ballard said. “My pro put me on some fish that were unbelievable. I was fishing a Carolina rig out fairly deep, and it was just a good day altogether.”

Ballard attributed his day-one success to a little bit of cloud cover, the right color of bait and a lot of luck.

Co-angler Clark Franklin of Midland, Texas, caught a limit of bass today weighing 24 pounds to end the day in the No. 3 spot. His stringer included a 6-pound, 6-ouncer.

“When we started out, we didn’t feel like they were on the beds, so we started throwing in deeper water,” Franklin said. “I hung four in there, and we moved, and I threw into a bush and hung that big 6-pounder. It got a little windy, but that didn’t seem to bother the fish. In fact, I think it helped.”

Franklin said his bite shut down about noon, though he did manage to catch one other keeper around 2 p.m.

In fourth place is Jacques Fleischmann of Valencia, Calif., with a limit weighing 22 pounds, 4 ounces. Behind him in fifth is Charlie Parker of Warren, Texas, with five bass weighing 20 pounds, 14 ounces.

Rounding out the top 10 co-anglers after day one on Lake Amistad: