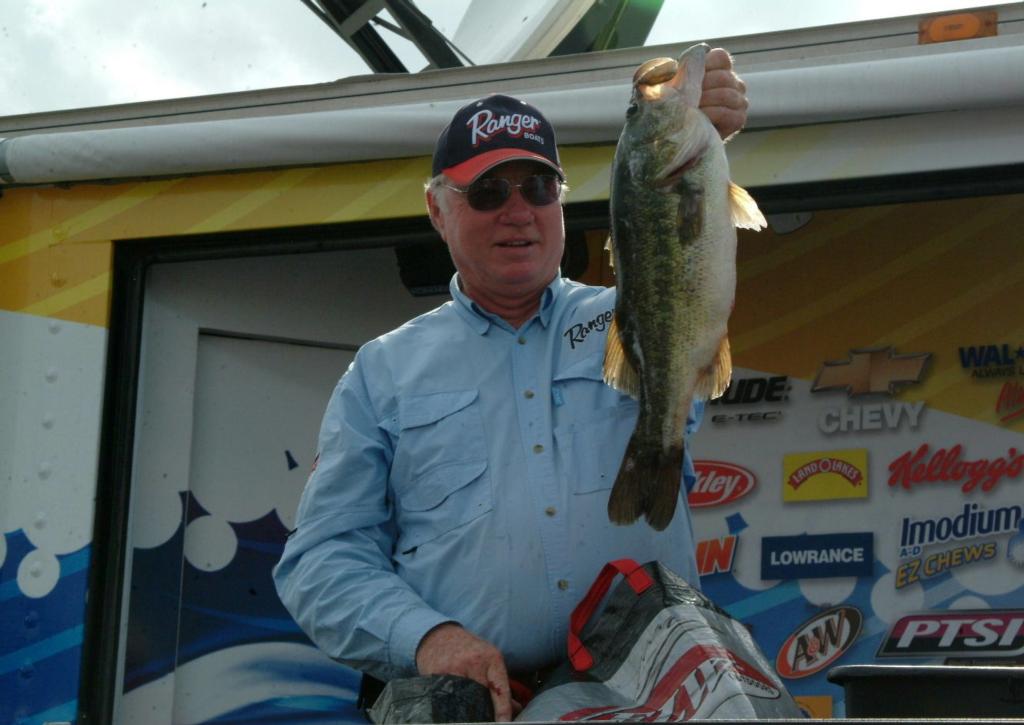 With his tournament win, spectacular day three and 14-8 monster bass, Turner paints a picture for the way this whole tournament shook out. Overall, 13,193 pounds and 9 ounces of bass were caught out of Lake Amistad over the past four days, a new Stren Series record for heaviest total tournament catch.

The tournament seemed to be a two-way race between Schoonveld and Bob Coleman, yesterday’s leader. But both of them suffered surprising stumbles today, Coleman in particular, opening the door for Turner to claim a win that relied heavily on his massive day-three weight of 33 pounds, 3 ounces, which he followed up today with a limit weighing 16 pounds, 7 ounces.

“Last year I weighed in the biggest sack of my life here, and I thought I would never, ever weigh in a sack that big again,” Turner said. “But yesterday I had 33 pounds, and that’s a fisherman’s dream.”

So is winning a Stren Series tournament, and though Turner has Wal-Mart FLW Tour and Wal-Mart Texas Tournament Trail victories to his credit, this is his first Stren Series crown, and no one was more surprised than he.

Turner’s own 16-7 day-four limit wasn’t the heaviest of the day by any means, so his third-place standing after day three was definitely a factor in his climb to the top.

“I thought it would take more weight than that,” he said. “I expected (the leaders) to do the same, so I didn’t think I’d have enough.”

Making Turner’s outlook even bleaker was that his go-to spot wasn’t working out for him like he had hoped, so he left it and went looking for fish – a dead-end road.

“The spot I had fished the first three days, I got bit in pretty early,” he said. “But the bite was a lot slower – it wasn’t the same. So I left, but I didn’t get bit there either, so I went back to the spot and caught seven keepers and culled up. It was steady all day, just a long time between bites.”

Turner caught them on main-lake points with hydrilla and trees, a staging area for prespawn bass and a pit stop on the way back home for fish that had already spawned.

“The fish were on their way in to spawn, and when they got through spawning, they’d go back there and kind of recoup,” he said.

Turner caught a few on a Carolina-rigged Brush Hog, but said the majority of his bass came on the lure that brought him the 14-8 – a prototype football-head jig made by Buckeye Lures, though he says he couldn’t use it today because he had broken all of them off in the previous three days.

For the win, Turner claimed $25,000 in cash plus a fully rigged Ranger boat. As for his mega-bass from day three, it has been donated to the Texas Share Lunker program, where Turner reports it is doing beautifully.

Dan Schoonveld of Mansura, La., spent the first two days of this event perched at the top of the leaderboard thanks to catches like his record-breaking day-one limit of 34 pounds, 12 ounces. Today proved to be a bit of a doozy, though, as he managed only 13 pounds, 3 ounces to bring his total weight to 89 pounds, 7 ounces, good for second place.

“What I caught the first day, I couldn’t believe it myself,” he said. “It was one of those days where I couldn’t go wrong. I was waiting for the fish to come in, and they didn’t come in today.”

Schoonveld was fishing drains in creeks as well as what he describes as the sharpest points in the biggest spawning flats. He was using an Ezee Jig of his own design on a drop-shot.

As for the spawning flats, Schoonveld said, “That’s where the big fish were moving up, except today. The difference today was the fish went ahead and moved up, and I did not adjust.”

Wind played a major factor in this week’s event, with wind speeds as high as 30 mph that would frustrate even the most disciplined angler. To combat that, Schoonveld relied on Kistler rods.

“I think my Kistler rods were my No. 1 key,” he said. “They’re so light and sensitive that I could throw a 1/4-ounce weight and feel everything.” 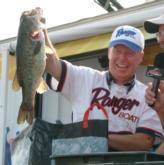 In third place is yesterday’s leader, Bob Coleman of Washington, Mo., with a three-day total of 89 pounds, 5 ounces. Coleman was very consistent the first three days of competition, bringing in 25-12, 26-5 and 24-15, respectively, but struggled today, weighing in only 11 pounds, 11 ounces.

“I actually had more bites today,” Coleman said. “But I’ve got a bad elbow. I set the hook and couldn’t hold them. They just got off.”

Coleman did help deliver a decisive victory to his co-angler partner, Jimmy Ballard, who won that division by an unbelievable 24-pound, 3-ounce margin.

“We had a great day,” Coleman said. “I had the bites, and I had the opportunities; I just couldn’t get it done.”

Coleman was Texas rigging Senkos with heavy weights, catching all prespawn fish in about 20 feet of water. For his third-place finish, he earned $8,849 plus a $5,000 Ranger bonus.

In fourth place for the third consecutive day is Tim Reneau of Seguin, Texas, with a four-day total of 88 pounds, 15 ounces. Reneau caught the day’s heaviest pro limit, weighing in 23 pounds of Amistad bass.

“I started out in practice fishing up the lake, fishing deep ridges, but the wind blew me off them,” Reneau said. “I drove around every day looking for fish, and this is it.”

Reneau caught his bass on a 3/4-ounce green-pumpkin jig and a Senko.

Sam Rayburn winner Stephen Johnston of Hemphill, Texas, took fifth place with a four-day catch of 83 pounds, 5 ounces. Johnston, too, had one of the better pro days, bringing in a limit today worth 21 pounds, 11 ounces.

“I caught a 10-6 on Tuesday and came back and caught a 9-pounder today – it just doesn’t get any better than Del Rio,” Johnston said.

Interestingly, Johnston’s father, Wayne, made the co-angler top-10, and like his son, finished in fifth place in his division. The younger Johnston is also the Texas Division points leader, a trend likely to continue given that the next Texas event is on his home waters of Toledo Bend.

Rounding out the top 10 pros on Lake Amistad:

The next Stren Series event is a Southeast Division contest at the Santee Cooper lakes near Manning, S.C., April 11-14.

The next Texas Division tournament is the third event of the season. It will be held at Toledo Bend near Hemphill June 20-23.