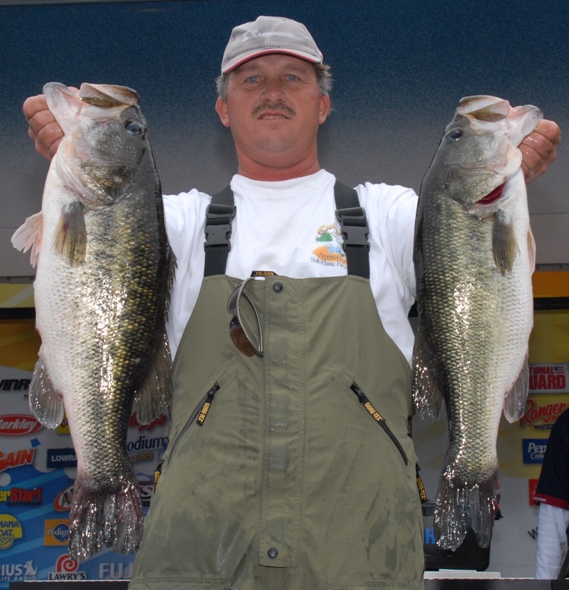 While some had success sight-fishing, many of the top stringers came by fishing Santee’s other famous springtime pattern: cypress trees.

Osteen, Florida’s Joseph Kremer leads the event after day one with a whopping 28 pounds, 3 ounces of Santee Cooper bass, giving him more than an 8-pound lead.

Kremer’s massive limit was weighed down with a day-one big bass checking in at 9 pounds, 2 ounces.

“It looks impressive, but I’ve really got nothing consistent going,” Kremer said. “Going into today, I knew where two big ones were on bed. I caught those two and then just went fishing. I ran all over the place, catching one here and one there, to fill out my limit.”

After catching the two bedders, Kremer fished a fluke and a plastic craw for the rest of his catch.

“I just had a good day,” he added. “I know it looks like I found a honeyhole that’s loaded with big ones, but I can assure you that’s not the case. I have no idea what I’m going to do tomorrow, except just go fishing.”

ounces to start the event in second place.

“I only burned a couple of gallons of gas today,” Godsey said. “I’m fishing a big area that’s got a lot of grass in it. My main bait is a Senko-like weightless stick bait made by JDC Bait Company.”

Godsey noted that some of his bass were probably spawning, but he could not see them.

When asked about the heavy winds which are forecasted for tomorrow, Godsey smiled and said that his new Power-Pole shallow-water anchoring device was going to come in handy. 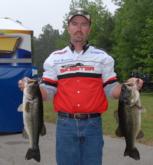 Scott Browning of Franklin, N.C., who has already scored a Stren Series top-10 finish at Okeechobee this year, is in third place with a five-bass limit weighing 19 pounds, 11 ounces.

“I feel like these fish use the trees to stage on as they move in and out of the bedding areas,” he said. “I’m fishing painfully slow – 20 times slower than I like to fish – making multiple presentations to each tree and really soaking the bait.”

Browning says he scouted several backwater ponds in preparation for the event, but he did not find enough bass locked on beds to feel confident sight-fishing.

“They were just too spooky for my liking,” he added. “With some warmer weather over the next couple of days, they may lock down better, and sight-fishing might be the way to go come Friday and Saturday.”

Craig Dowling of Many, La., has been a hot stick in FLW Outdoors competition of late,

and it does not look like he is cooling off anytime soon.

Dowling has collected two top-10 finishes in Stren Series competition this season and scored his first FLW Tour top-10 at Lake Travis in Texas in February.

Today, Dowling angled his way toward another top-10 finish by catching a limit for 19 pounds, 4 ounces to begin the event in fourth place.

“I looked for spawners the last couple of days, but didn’t feel like the water had quite warmed back up enough to start the tournament fishing that way,” Dowling said. “So I fished trees today, but there is really no rhyme or reason to it. I covered a ton of water, fishing trees all over the lake.”

Like others, Dowling believes this event will end with a sight-fishing bite.

“By tomorrow and certainly Friday, there should be a lot more fish on beds,” he added. “So I might have to change gears over the next couple of days.”

Clark Smith Jr. of Pell City, Ala., has been another hot rod in the Stren Series this year, scoring two top-10s already.

His fish-catching ways continued today with a limit weighing 18 pounds, 14 ounces, putting him in fifth place.

Rounding out the top 10 pros in the Stren Series event on Santee Cooper after day one:

Hammonds’ three-bass catch was anchored by the Co-angler Division’s biggest bass of the day that weighed 6 pounds, 12 ounces.

“I really have to thank my partner Tony Couch,” Hammonds said. “I call him Coach Tony, because all day long he kept saying, `You’ve got to slow your bait down,’ and when I did, I’d get a bite.”

Cruz Cope of Treadway, Tenn., is in third place with one of the day’s few co-angler limits weighing 10 pounds, 11 ounces.

Wil Hardy of Harlem, Ga., is in fourth place with four bass for 10 pounds, 7 ounces.

Billy Carroll of Fayetteville, N.C., is in fifth place with four bass for 9 pounds, 14 ounces.

Rounding out the top 10 co-anglers in the Stren Series event on Santee Cooper after day one: