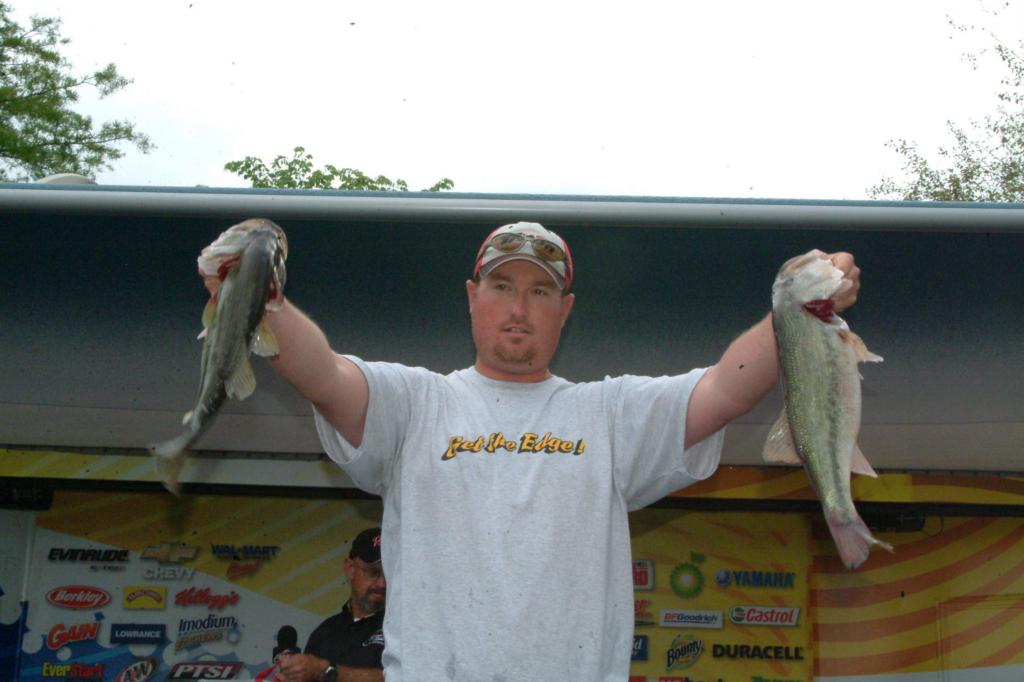 BENTON, Ky. – There was no change at the top on day three of the Stren Series Central Division event on Kentucky Lake, as yesterday’s top three pros retained their status in the exact order today. Andy Hodges of Cadiz continues to dominate, leading all three days with a combined weight of 59 pounds, 6 ounces.

Hodges peaked yesterday when he caught 22 pounds, 1 ounce, and he seemed not at all confident on stage today that he would even stay in the top 10. Either he was faking or he’s a really poor guesser, as his day-three limit of 17 pounds, 12 ounces was one of the day’s heaviest and handed him a 5-pound lead heading into the final day.

Hodges continues to lead No. 2 Curt McGuire and No. 3 Koby Kreiger for another day, and the rest of the top 10 features many of the same names as it did on day two, though three pros fell out of the cut. The top 10 pros and 10 co-anglers continue competition tomorrow, where they will compete for the win based on heaviest four-day weights.

When the tournament finally comes to a close tomorrow afternoon, no one will be more grateful than Hodges, who talked of frayed nerves and a worn-out body after today’s weigh-in.

A slow morning bite did much to tax his nerves today, as he lost three keepers in the early hours.

“I started out this morning and went really shallow, and I struggled,” he said. “I had a big fish jump off, and there were three keepers right off the bat that I lost. So I started catching transition fish that have already spawned out.”

Hodges’ deeper fish – all of which came out of Lake Barkley today – kept him firmly in the lead. He reported catching them off drops and long points.

“I had been catching them fairly shallow, and I had the bites,” he said of his lost fish. “It was 10 o’clock and I had one fish. But I ended up scraping out a limit, and I culled twice.”

Hodges was not the only one complaining of a slow bite today, nor was he the only one to blame it on fishing pressure.

“The shallow fish have been beat up so badly the last couple of weeks,” he said. “There seem to be more and more fish moving out. I’m not getting as many bites as I was, but I think I can catch a limit (tomorrow). It’s just a matter of whether they’re the right size.

No. 2 pro Curt McGuire of Lawrenceburg, Tenn., may have caught his lightest limit of the tournament today, but that isn’t saying much considering the weights were down for the field as a whole today. His day-three five-bass limit weighing 15 pounds, 4 ounces brought his three-day total to 54 pounds, 6 ounces, exactly 5 pounds behind Hodges heading into the final day.

“I caught as many keepers – probably 20 – as I have been, but the quality is just not there,” McGuire said. “This morning was extremely slow. I don’t know if it was the cloud cover, but it was like it was dead.”

McGuire said the bite did not heat up until around 12:30 this afternoon, and then he said he was catching keepers on nearly every cast.

“But that’s all they were – just keepers,” he said. “I remembered one stump, and I threw out in that stump and caught my one big one.”

That big one, he says, weighed approximately 4 1/2 pounds, and he reported fishing all ledges on Kentucky Lake today.

“I’ve still got a lot of schools, but I’ve either caught all the 4-pounders, or they’re just not there,” he said.

Kreiger hangs on to No. 3 spot

Still in third place is Koby Kreiger of Okeechobee, Fla., with a three-day catch of 50 pounds, 11 ounces. Kreiger busted a 21-8 limit yesterday but mustered only 13 pounds, 4 ounces on a tough day three.

“It was a little tougher on me today,” Kreiger said. “I didn’t catch anything on a topwater, and that’s been my main thing.”

For the final day, Kreiger is going to rely on some old holes he knows about from prior experience on Kentucky Lake. It can’t hurt that his fishing partner Craig Powers is also in the top 10. No doubt there is some information-sharing going on there.

“I’m going fishing tomorrow where I haven’t been yet,” Kreiger said. “I only got a day and a half of practice, but I’ve been here enough.”

Indeed, Kreiger’s resume includes four top-10 finishes (including this week’s performance) and one win on Kentucky Lake since 1997.

Lashlee has solid day to move up to fourth

Sam Lashlee of Camden, Tenn., caught the day’s heaviest pro stringer – a limit weighing 17 pounds, 15 ounces – to move from eighth to fourth with a three-day total of 49 pounds, 15 ounces. He may be nearly 10 pounds out of the lead, but Lashlee – this event’s defending champion – should never be counted out at Kentucky/Barkley.

“I’m running to New Johnsonville, starting off fishing shallow,” Lashlee said. “Once I get my limit, I’m hitting river islands on the way back.”

Lashlee’s arsenal of baits this week include a Strike King buzzbait, a 3/8-ounce spinnerbait, a Denny Brauer watermelon tube and a football head jig. He said he’s catching about half his bass in the shallow water and the other half around the river islands.

“They’re postspawn fish,” said Lashlee, who has been targeting bushes and willow trees and then shallow bars. “They’re on their way out. I think they’ll be farther out tomorrow, and I’m looking good.”

In fifth place with a three-day catch of 49 pounds is Charlie King of Shreveport, La. He’s fishing shallow water on Kentucky Lake with soft plastics to land his bass.

Rounding out the top 10 pros who will fish tomorrow on Kentucky/Barkley:

With a day-three haul of 18 pounds, 9 ounces, the day’s heaviest stringer award goes to co-angler Chuck Loerzel of Yorkville, Ill. The hefty catch propelled Loerzel into the No. 1 position with a three-day total catch of 42 pounds, 12 ounces that gave him a 4-pound, 10-ounce lead heading into the final day.

Loerzel credited his good fortune today with fishing out of the back of Lashlee’s boat, but in fact, Loerzel has been in contention all week. He ended day two in the sixth position and says he hasn’t really changed anything this week.

“I was throwing a crankbait and a spinnerbait, and then I threw tube baits like a Senko,” Loerzel said. “They’re the same baits I’ve used since I’ve been down here. I’ve thrown it behind everybody.”

Loerzel said the primary plastic lure he was throwing was a shaky head, and he said that for now, he likes his chances.

“I fished with Lloyd Pickett Jr., and we went up north,” Smith said. “I fished the same bait I’ve been fishing all three days.”

Smith counts himself among the many competitors who had a rougher go of it on day three.

“I only had five keepers,” he said. “I’m hanging in there by the skin of my teeth. But (Pickett) fished open water and allowed me to fish all day.”

Frank Pempek ended day three as the No. 3 co-angler with a three-day catch of 35 pounds, 14 ounces. He only caught four bass today, but one of them was a 6-pounder that brought his day-three total to 12 pounds, 8 ounces and enabled him to stay in contention.

“I’m catching bass on plastic worms, light line and spinning rods,” Pempek said. “I’ve been fishing in the backs of pockets where the water is pretty calm. The water is about 8 feet deep, and the fish are cruising.”

Pempek said he has fished Kentucky Lake all three days and, like most co-anglers, said his chances tomorrow depend on where his pro partner (Kreiger) is fishing.

“I feel that if I can get to my kind of water and fish my kind of baits, I can catch fish tomorrow,” he said.

Baldwin, Hunter round out top five

Ending day three in the fourth position is Barry Baldwin of Dayton, Ohio, with a three-day catch of 35 pounds, 9 ounces.

Behind him in fifth is Brandon Hunter of Benton with 33 pounds, 7 ounces over three days. Today was his best day yet, as he caught 16 pounds, 1 ounce and moved 25 spots up the leaderboard to earn the chance to fish the final day.

Rounding out the top 10 co-anglers who will fish tomorrow on Kentucky/Barkley:

Day four of Central Division competition at Kentucky Lake begins as the final-round field of 10 boats takes off from Moors Resort and Marina in Gilbertsville at 6:30 a.m. Central time Saturday. Each division’s winner will be determined by four-day combined weight.