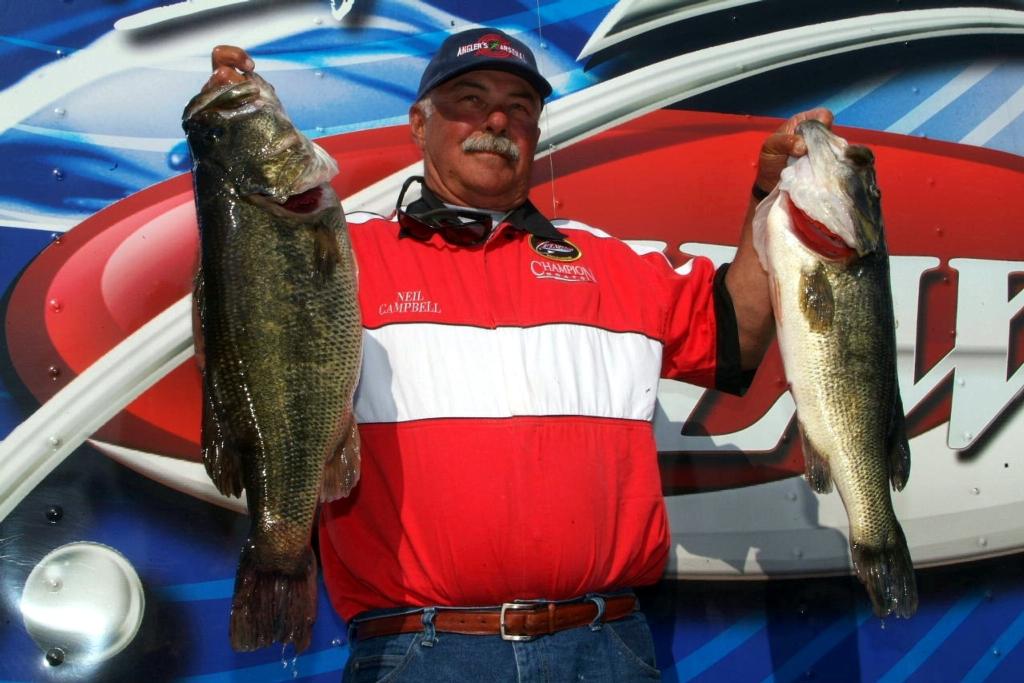 Pro Neil Campbell of Fallbrook, Calif., caught a five-bass limit weighing 30 pounds, 1 ounce Thursday to capture the lead on day two of the Stren Series Western Division tournament on the California Delta. These two largemouths weighed in at 10-9 and 8-1, respectively. Photo by Jeff Schroeder.
May 17, 2007 • Jeff Schroeder • Toyota Series

BETHEL ISLAND, Calif. – The big news out of the Bay Area the last couple of days has been the unfortunate plight of a pair of whales that have stranded themselves in the Sacramento River. To the indiscriminate eye, it might have appeared Thursday that Stren Series Western Division pro Neil Campbell actually caught them and weighed them in at Russo’s Marina.

The area is abuzz about the whales, two humpbacks that zigged when they should have zagged on their annual migration up the Pacific coast. Somehow, they veered through San Francisco Bay and up into the California Delta, making it up the Sacramento River past Rio Vista and as far as West Sacramento – some 90 miles inland from the Golden Gate Bridge. The wayward whales appear to be all right, and rescue efforts using humpback sounds are under way to coax them into turning around to head back out to sea.

If Coast Guard rescuers had been at Thursday’s Stren Series weigh-in, however, they might have abandoned their efforts – if only due to a case of mistaken identity.

Campbell hauled in two massive largemouths – a 10-pound, 9-ounce kicker and an 8-1, not to mention a third that weighed in around 6 pounds – to anchor his immense five-bass limit weighing a total of 30-1. It was only by virtue of the phenomenal bass fishery known as the California Delta that Campbell’s weight wasn’t even the top catch of the day.

Still, the tournament veteran from Fallbrook, Calif., climbed to the top of a bass-laden heap Thursday, taking over the Pro Division lead with a two-day total of 49 pounds, 6 ounces. He caught 19-5 the day before.

“I’ve had 28 pounds with four fish before, but that’s my biggest (catch) in a tournament,” Campbell said. “I’ve been doing this since ’71, and I’ve always said that I’d rather be lucky than good.”

Campbell put his veteran savvy to good use Thursday. Despite catching a hefty total of 165 limits, the pro field actually had a rougher go of it on day two at the Delta. The wind came up and knocked guys around the expansive waterway a lot, which kept the weights down somewhat. Campbell, however, used that to his advantage.

“I’m a firm believer in keeping the bait wet,” he said. “I started fishing and didn’t raise the trolling motor until 1:30, and by then I already had all my fish. All I can say for the guys who aren’t catching fish is that they’re fishing too fast. It’s about patience, and the old saying that even a blind squirrel finds an acorn once in a while.”

Campbell found his nut fast Thursday, catching his 6-pounder on the first cast. While he wasn’t exactly forthcoming with the details, he said he was fishing shallow at a location some distance from Russo’s Marina. Many top pros are sticking close to the marina in Franks Tract to focus on big postspawners, but Campbell has made a good run the last two days for a reason.

“Most of my fish haven’t spawned yet. They’re coming in, staging to spawn, and I think my area’s replenishing,” he said. “Yesterday, I didn’t see another boat in there, and today I only saw two. The guys fishing around here are catching fish guarding fry that have already spawned, so essentially those fish have each lost 2 pounds already.”

And while that strategy worked well for him Thursday, he maintained that it was mere luck that landed him his big stringer. He said he went to his spot solely to fill his livewell with 3-pound fish for a limit, and then he planned to move. However, he caught the 6-pounder on his first cast, and then the two whales hit within 10 minutes of each other around 10 o’clock.

“I thought my co-angler (Jason Milligan) was Mike Iaconelli for a second there, he was so happy,” Campbell laughed about catching the 10 1/2-pounder. “He said that he’d never netted a fish like that before. And the thing was, he missed it twice.” 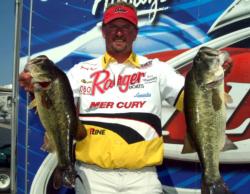 Reese looms in second, poised to pounce on points title

Jimmy Reese is one of the nicest guys on this circuit, but he must only strike fear into the hearts of his fellow competitors on places like the Delta and Clear Lake. The pro from Witter Springs, Calif. – who happens to be the defending Cal Delta champ and reigning Western Division Angler of the Year – climbed the ladder yet again at the Delta, staking out his spot in second place with a two-day total of 47 pounds, 8 ounces.

Reese caught a nice, 22-pound limit Thursday to add to his 25-8 from Wednesday.

“It was brutal,” he said. “I went to the same area (in Franks Tract) where I caught them on swimbaits the first day, and it took me three hours to get 9 pounds. I had to put down the swimbait and throw a jig and a drop-shot. Then I caught, like, seven fish on a Senko. I was like, `C’mon, these fish can’t be that finicky.'” 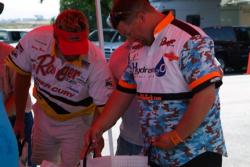 Finicky or not, Reese prevailed Thursday with a limit over 20 pounds, as he tends to do here. In doing so, he threw a serious monkey wrench into the 2007 standings race. Michael Tuck, who has led the points since the second tournament of the year and who caught a hefty limit Wednesday, laid an egg Thursday with just a 7-pound, 9-ounce catch. Coming into this event, Reese trailed Tuck in the standings by 31 points, but he now leads him by 47 places at this tournament. If Tuck comes up short tomorrow, Reese will be poised to win his second Western Division standings title in a row.

“I’m going to make Mr. Tuck think a little bit,” Reese said. “We all want it – him, Jim Davis, Gene Gray and me. And (Tuck) went out and did it yesterday with that 27 pounds. But for him to do what he did today is mind-boggling.

“I think he’ll be OK, though. If he catches 15 pounds, he’ll be OK. He’s my buddy, so I’ve encouraged him, but tomorrow’s going to be interesting. I just can’t do what I did this morning.” 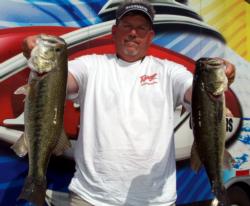 Mike Goodwin of Lake Havasu City, Ariz., claimed third place for the pros with a two-day total of 45 pounds, 8 ounces. He caught a limit weighing 18-5 Thursday.

“I didn’t change tactics at all. I caught everything on the same baits, a Texas rig and a drop-shot on 12-pound line,” he said. “I’m just fishing shallow, nothing over 5 or 6 feet. And I did catch some three fish or so on a swimbait today.” 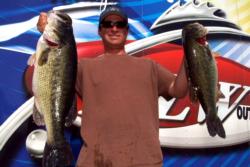 “I’m throwing a drop-shot with a Roboworm and frogs,” he said. “I stayed in the same place today. When the wind’s high, I throw a shallow frog along the bank looking for spawners and then go fish it if they bite. I have an area with a lot of fish and I’m just milking it.”

Mike O’Shea of San Ramon, Calif., in second on day one, dropped to the fifth spot for the pros with a two-day weight of 43 pounds, 12 ounces. He caught 15-14 Thursday.

“A lot of things (changed from yesterday),” he said. “I think there’s been a lot of fishing pressure, and a lot of boats have moved into my area. But that’s not it. I lost some fish today, too. I’ve just got to grind it out and stay in the same place.”

Rounding out the top 10 pros after two days at the California Delta:

While the leader, Campbell, impressed with his 30-pound, 1-ounce limit, it was Riehl who caught the heaviest stringer of the day. His 30-10 became the heaviest of the week so far and launched him from 140th place into ninth. 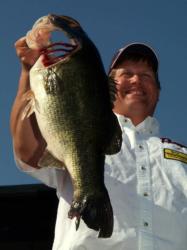 And once again, the big bass was a hog. While several double-digit fish came across the scale, it was Jeff Lamy of San Jose, Calif., who earned the Snickers Big Bass award in the Pro Division thanks to an 11-pound, 14-ounce largemouth.

The California Delta: This place has whales. Literally.

Curt Dowhower of Ripon, Calif., took over the Co-angler Division lead with a two-day total of 38 pounds, 3 ounces. He caught a limit weighing 13-10 Thursday but earned the top spot mainly due to the 24-9 monster catch he registered Wednesday. 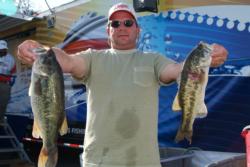 “I’m catching them scattered all over the place on a Senko,” he said, “and some on a jig.”

Also throwing everything but the kitchen sink was Mike Iloski of Escondido, Calif., who placed second for the co-anglers with a two-day weight of 33 pounds, 10 ounces. He caught 17-14 Thursday.

“You name it, I caught them on just about everything,” he said.

Fourth place for the co-anglers went to Craig Griffin of Lehi, Utah, for a two-day weight of 31 pounds, 13 ounces. He caught 27-4 Thursday, which was, by far, the heaviest limit of the day from the back of the boat.

Rounding out the top five co-anglers was Chad Frie of Livermore, Calif., with 31 pounds, 13 ounces. He caught 14-13 Thursday.

Chris Osheroff of Bryon, Calif., won the Snickers Big Bass award in the Co-angler Division thanks to a 7-pound, 3-ounce largemouth.

Day three of Western Division competition at the California Delta begins as the field of 174 boats takes off from Russo’s Marina at 6:30 a.m. Pacific time Thursday. Following tomorrow’s competition, the fields will be cut to the top 10 anglers apiece based on three-day cumulative weight.