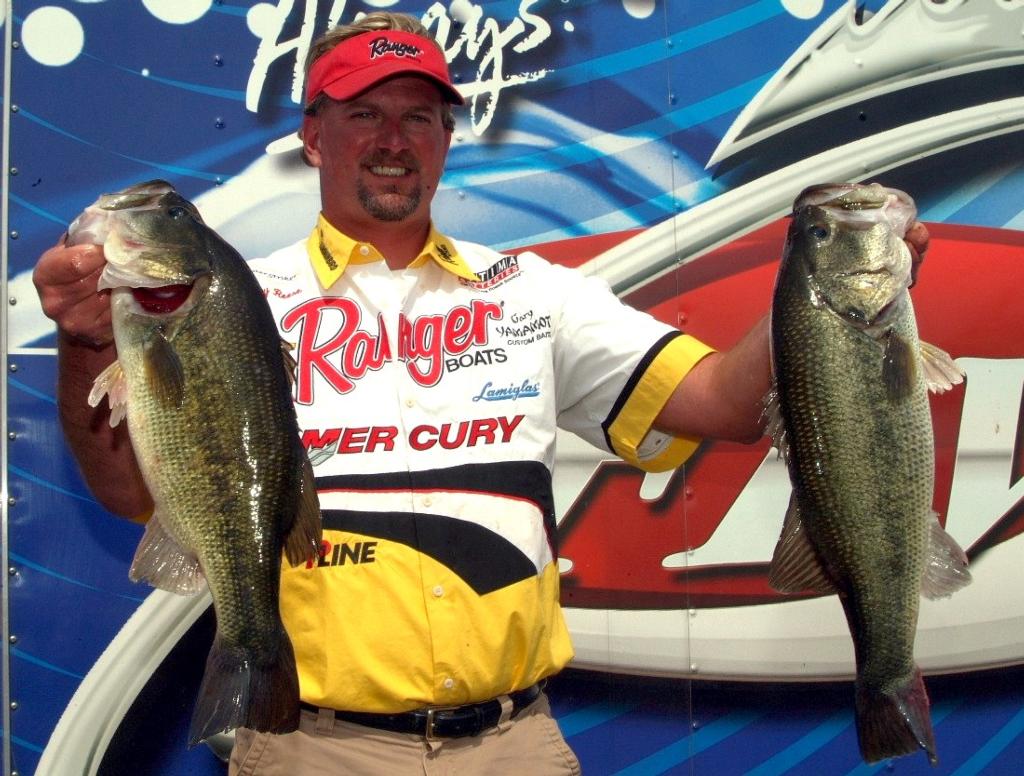 For the third day in a row, Reese caught a leading limit of bass – 23 pounds, 2 ounces – Friday and vaulted into the top spot in the Pro Division of Stren Series Western competition at the California Delta with a three-day weight of 70-10. In the process, the pro from Witter Springs, Calif., not only positioned himself nicely to repeat as the Stren Cal Delta champion, he iced his second consecutive Western Division points title.

All is unofficial until the conclusion of the tournament Saturday, but it didn’t take a rocket surgeon to do the standings math Friday, especially as it concerned Tuck. The gunslinging pro from Antelope, Calif., led all pros in points pretty much from the beginning of the second tournament of the year and hadn’t finished worse than 12th place in the first three events. At Clear Lake last month – despite catching two of the heaviest limits on record – he suffered a 4-ounce runner-up finish to local Jared Stone in the final round. This week, when he hooked into a monster 27-pound limit on day one, he looked ready to salve that loss by running away with the points title.

But then came days two and three. Tuck just didn’t produce, and Reese, like clockwork at the Delta, did. Tuck’s 7 pounds, 9 ounces yesterday and 8-14 today just aren’t enough at a monster factory like this one. He finished the week in 80th place and – just like that – the California Delta once again became the site for a Jimmy Reese victory lap.

“I want to be the first person to congratulate Jimmy Reese,” said an obviously disappointed, but gracious, Tuck. “It’s a long season, and he’s one of the best fishermen out there.”

It’s hard not to feel bad for Tuck, who quietly began talking about the standings race as far back as Lake Mead and then backed it up by catching some of the most eye-popping stringers of a big-bass season. 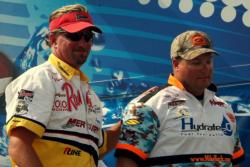 But as they say, this whole Angler of the Year business is a marathon, not a sprint. Ultimately, Reese is assured the title because he came into the event 31 points behind Tuck but now will finish this tournament at least 70 places above him, if not 80. The other standings contenders – Gene Gray (136th place at this tournament), Jim Davis (51st place) and Cody Meyer (31st place) – have also been eliminated.

“Honestly, I wasn’t even thinking about it,” Reese said about the points title. “I mean, it wasn’t in my hands. It was in Mike’s hands. There wasn’t much I could do about it.”

On the contrary, he did plenty, not the least of which was pounding out his third big bag in a row Friday. Conditions were similar to what the anglers saw yesterday – breezy, but workable – but the fish have been getting a lot of pressure, especially in the nearby community holes. So Reese said he changed up.

“This morning, I just abandoned everything from the first two days,” he said. “I went west and caught a 4-(pounder) on a Spook. In 2 1/2 hours there, I caught a bunch of small keepers. I came back and the water was up, so I said, `I’m going to drop-shot tules.'”

Decisions like that win points titles in the West. Reese saw a 3-pounder on a bed and pitched to it. What bit was a 6-pound female, which he hadn’t seen.

After that, Reese prowled the bank throwing reaction baits that included a Wild Vibe lipless crankbait as well as a not-so-secret weapon that he’ll talk about Saturday afternoon. On the power baits, he hooked into six more fish in the 3 1/2- to 5-pound range.

“Plus, I missed a donkey. I mean, it was huge. You better believe I’m going back there tomorrow,” he said. “I went to stuff that nobody was fishing and just started covering water. It was so much fun today.”

Those are familiar words from Reese at this waterway. Last year in May, Reese won the tournament and the 2006 Western Division Angler of the Year award in the homestretch at the Delta.

And 2007’s starting to look like deja vu all over again.

“I don’t know. I think if I can catch 20 pounds, I’ve got a chance,” he said. “But look what happened last year. (Steve) Sapp came in with that 14-pounder, so anything’s possible here. I just need to keep the right mindset and make the right decisions.

“But to win it, wouldn’t that be crazy?” 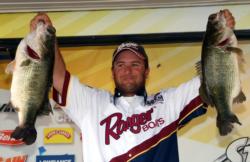 Rob Riehl caught the heaviest limit for the second day in a row and launched himself into second place for the pros with a three-day total of 69 pounds, 7 ounces.

The pro from Tracy, Calif., caught 28 pounds, 1 ounce Friday, topping all other pros. Thursday, he caught 30-10, also the heaviest of the day.

So why isn’t he leading the tourney?

“Well, I broke down the first day, which knocked out about 3 1/2 hours of fishing time,” he said.

In fact, after Wednesday Riehl was languishing in 140th place with just 10 pounds, 12 ounces, easily making his the biggest comeback of the week.

“That just put me in a mindset to swing for the fences and make a comeback,” he said. “The interesting thing is the fish that missed the bait. If I had caught those fish, I would have easily had 35 pounds today and 45 yesterday.”

“With the swimbait, you don’t get very many bites,” he said. “But when you get them, they’re good fish. Those are my two biggest bags ever.” 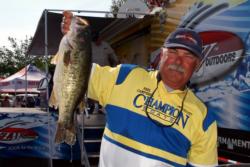 He caught a limit Friday, but it was smaller than he wanted at just 18 pounds, 5 ounces.

“There are a lot of good fishermen out there, and I had a bad day today,” Campbell said. “I lost one right at the boat that was about 8 pounds. That would have helped.”

Zack Thompson of Orinda, Calif., grabbed the fourth spot for the pros with a three-day weight of 64 pounds, 12 ounces.

“I’m catching good numbers on high tide both on down baits and reaction baits – swimbaits and crankbaits,” he said. “Today was a little slower than most, but I’ve been fishing the same area for the last three days.” 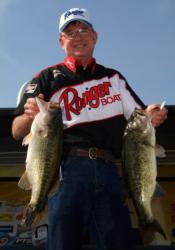 The only other angler besides Reese to catch more than 20 pounds all three days, Wayne Hinrichs of Novato, Calif., took fifth place for the pros with a three-day weight of 63 pounds, 3 ounces. 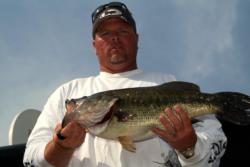 Rounding out the top 10 pros to make the cut after three days at the California Delta:

Rodney Brinser of Brentwood, Calif., won the Snickers Big Bass award in the Pro Division thanks to an impressive 10-pound, 14-ounce bass.

Even though he lost a fish estimated between 10 and 12 pounds Friday, Mike Iloski of Escondido, Calif., took over the Co-angler Division lead with a three-day weight of 49 pounds, 2 ounces.

Iloski – who caught 15 pounds, 8 ounces Friday – has been steady all week, catching between 15 and 18 pounds all three days so far.

“I threw about six or seven baits today,” he said. “I was just going for whatever looked right wherever we were at, and it’s been a great tournament.”

J.R. Wright of Truckee, Calif., took second place for the co-anglers with a three-day total of 48 pounds, 4 ounces. He caught 19-7 Friday, which was the heaviest limit from the back of the boat.

Co-angler Curt Dowhower of Ripon, Calif., made the cut in third place with a total weight of 47 pounds, 7 ounces. He caught 9-4 Friday.

Kyle Clement of Anderson, Calif., took fourth place for the co-anglers with a three-day weight of 45 pounds, 4 ounces. His weight Friday was 18-5.

Gary Haraguchi of Brentwood, Calif., rounded out the top five co-anglers with a three-day weight of 43 pounds, 15 ounces. He caught 19-5 Friday.

Kenneth Yamasaki of Discovery Bay, Calif., won the Snickers Big Bass award in the Co-angler Division thanks to an 8-pound, 1-ounce bass.

Day four of Western Division competition at the California Delta begins as the final-round field of 10 boats takes off from Russo’s Marina in Bethel Island at 6:30 a.m. Pacific time Saturday. Each division’s winner will be determined by four-day combined weight.