It’s Delta vu all over again 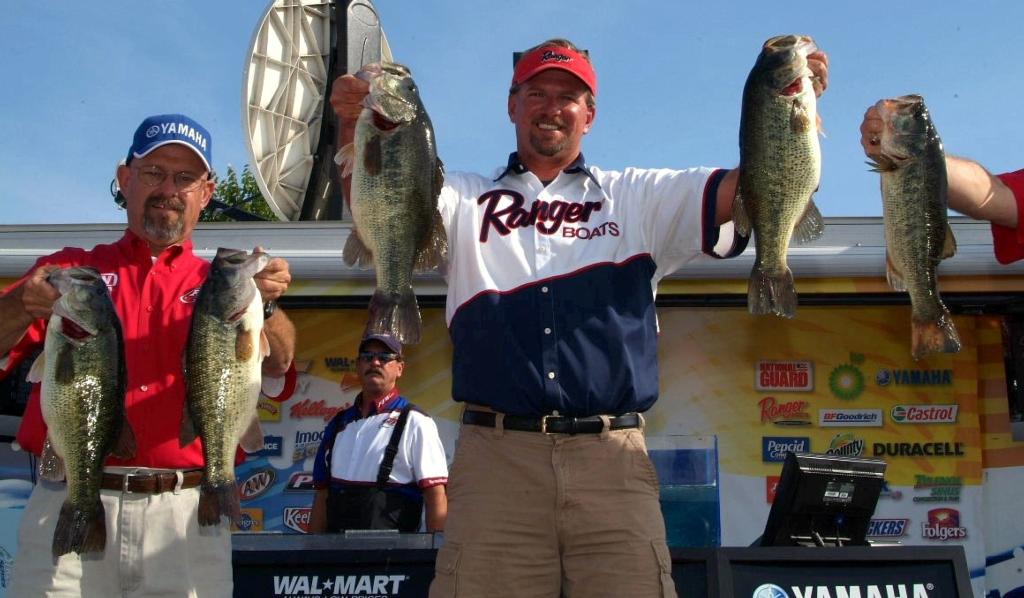 Jimmy Reese (center) caught a five-bass limit weighing 22 pounds, 5 ounces in Saturday’s finals. He was the only angler to break 20 pounds all four days of the tournament. Photo by Jeff Schroeder. Angler: Jimmy Reese.
May 19, 2007 • Jeff Schroeder • Toyota Series

BETHEL ISLAND, Calif. – Something strangely familiar happened at the Delta on Saturday.

It wasn’t just that Jimmy Reese caught yet another 22-pound sack of bass and won the Stren Series Western Division finale at the California Delta, nor that he clinched the Pro Division standings title in the process.

But did he have to go and beat Justin Kerr too?

Now that’s just eerie. Saturday’s weigh-in was like watching one of those retrospective shows on VH1 where they make fun of pop-culture highlights a week or a year after they happened. Hey, remember in 2006 when Jimmy Reese beat Justin Kerr at the Delta to win Angler of the Year? Wasn’t that funny?

Sure, but funny is when it happens once. If it happens twice, it’s a phenomenon.

Indeed, Stren Series fans couldn’t be faulted if they felt they were in a time warp Saturday afternoon. There he sat in the finals, Kerr in the leader’s hot seat after weighing in a 20-pound sack, watching as the last pro, Reese, came to the scale with a huge fish limit of his own. It’s May, the California sun is shining, and the kids are fishing in the trout pond behind the crowd in the parking lot of the Antioch, Calif., Wal-Mart. Yup, feels like 2006, all right.

“Isn’t it funny? It’s the exact same thing,” Kerr laughed. “There was nothing I could do.”

“Justin, he catches them. He’s a stud fisherman who certainly deserves to be there,” Reese said. “I don’t know. I’m not even supposed to win here.” 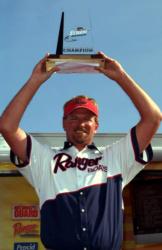 Second verse, same as the first

For the record, Reese actually clinched the standings title Friday when he made the cut out of the opening round at the Delta – which, incidentally, is exactly how he did it last year. We’ll check the books to make sure, but this is likely the first time anyone has won back-to-back points titles in the Stren Series.

It’s certainly the first repeat champion at the California Delta in FLW Outdoors competition, and Reese said he used his standings win to good effect Saturday.

“Winning the Angler of the Year took the pressure off for today,” he said. “I just went fishing. Whatever was in front of me was what I fished. If it was beds or deeper current or weeds, that was what I went after. I’d get to a spot and I’d ask, `How am I going to fish what’s in front of me?’ I broke a fish off today on a hook set, but other than that I didn’t lose a fish all week. Everything just went right.”

Reese caught a five-bass limit weighing 22 pounds, 5 ounces in Saturday’s 10-boat finals. He was the only angler to break 20 pounds all four days of the tournament, and his winning total, 92-15, beat Kerr by almost 10 pounds.

Reese unsurprisingly maintains that he has a secret for doing well at the Delta. Judging by his track record here, that’s probably the most truthful thing an angler has said here all week. What we do know is that Reese fished mainly in Franks Tract all week, working a variety of spots and patterns. On Saturday morning, his first reaction-bait area proved unproductive, so he moved out toward “middle Franks” and filled out his limit on a Senko. Then his partner, Mike Iloski – who, not coincidentally, won the Co-angler Division – reminded him of a spot that he knew of but hadn’t fished yet. There he popped two 5-pounders. After that, toward the end of the day, Reese was finally able to fish a spot that had eluded him all week because of boat traffic. There, he was able to cull up with three good keepers.

“There was a boat in there, so I couldn’t fish it all until today,” he said. “I go in there this afternoon, and it was whack, whack, whack.” 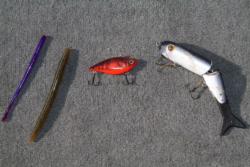 As for exactly how Reese caught what, where and when remains the mystery that wins California Delta tournaments. One key hint, however, might lie in the array of baits that he said he used not just all week, but even just today. Officially, his winning baits were a Margarita-Mutilator-colored Roboworm for his drop-shot, a watermelon-colored Yamamoto Senko and a Wild Vibe lipless crankbait. One wonders, however, if the key element was the eye-grabbing MS Slammer swimbait that he didn’t admit to using until Saturday.

Whatever the case, that’s the kind of versatility that wins Angler of the Year titles. This year, Reese finished 16th at Shasta Lake in January, sixth at Lake Mead in February and 26th at Clear Lake in April. Those three fisheries alone are about as different as they come from each other, but then throw in the labyrinthine tidal rivers of the Cal Delta and you’ve got yourself a mind-boggling mess to fish for a season. But for Reese, who hails from Witter Springs, Calif., and calls Clear Lake (where he also won last year) his home water, it’s all in a day’s work.

“It’s just a thinking process of going through the tournament, making the right decisions,” he said. “I did make some changes throughout the week. I fished a little longer and harder the first two days to get better weights, but I was also trying to leave some fish in key areas for later. There were a lot fewer weeds this year, and that changed the area that I fished last year. It set up totally different, and I didn’t even fish it.

“This is good. It feels great. We are really fortunate to have (FLW Outdoors) come out here and put on this show for us,” he said. “I honestly didn’t think I could win here again, but I guess you can.”

Out West, Reese has certainly been the show’s biggest star the last two years. He has three wins – two at the Delta, one at Clear Lake – and, with his $25,000 winner’s check today, over $243,000 in career earnings. That’s not to mention the Ranger boats, including one this week, that he has won.

And don’t forget the 755 points this year for Jimmy Reese, who is now your 2006 and 2007 Stren Series Western Division Angler of the Year. 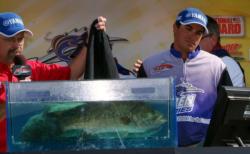 Kerr, who hails from Simi Valley, Calif., grabbed his second runner-up finish and earned $8,917 at the Delta with a four-day total of 83 pounds, 3 ounces.

His limit Saturday – 20 pounds, 7 ounces – was the second-heaviest of the day behind Reese’s. He caught it mainly on a black frog from Reaction Innovations known as a Swamp Donkey, but also used a drop-shot with a Roboworm.

“I think a lot of females were sitting off the beds a little bit, so I could catch them on a frog when the tide was coming in,” he said.

Kerr’s main problem this week was dead fish. He had one Saturday and also one Wednesday. Fishing regulations here state that an angler cannot cull a dead fish. If it goes in the livewell, it stays in the livewell. The issue with Kerr’s lost fish was that they were early catches each day, and they were small. In addition to the 8-ounce penalty he suffered for each fish, he lost major weight in his limits since he had to keep small fish.

“I had to cull out 4-pounders because of those 2-pound fish. It probably cost me 4 or 5 pounds, total, this week,” he said. “Like Jimmy said, he fished flawlessly. I was not flawless.”

But he’s still a stud. Not only did Kerr exhibit true sportsmanship in following the dead-fish culling rule to the letter of the law, he accumulated his fifth Western Division top-10 finish this week.

He’s still searching for that big win, though.

“Like I said last year, I’m just going to keep plugging away,” he said. “Eventually, I’ll win one of these things.” 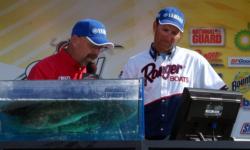 Zack Thompson of Orinda, Calif., caught a limit weighing 16 pounds, 9 ounces and finished third for the pros with a total weight of 81-5. He earned $8,026.

“It’s been a really fun week. Today I had an opportunity in the last five minutes to catch a really big fish, but I just couldn’t land that big kicker,” he said. “I had one game plan the entire week. I was flipping pretty shallow with Berkley Mad Critters and a Sweet Beaver on 65-pound-test line. These fish aren’t line-shy out here.”

Rob Riehl of Tracy, Calif. – who caught the biggest limits of the day Thursday and Friday – had trouble backing that up in the finals. His limit Saturday weighed just 11 pounds, 11 ounces and he finished fourth for the pros with a total weight of 81-2.

“My biggest problem the last two years here is that, by day four, I have no fish left,” he said. “I didn’t have that problem this week, but I lost a lot of fish today. I was throwing a big bait and I got a lot of big bites, but I couldn’t keep them on the hook.”

Ken Mah of Elk Grove, Calif., slid up to finish in the fifth position for the pros and collected $6,242 with a final total of 80 pounds, 13 ounces. He caught a nice limit weighing 19-3 Saturday.

“Every morning I started out west throwing a crankbait, and then I’d leave the west with 16 to 19 pounds and come back here,” he said. “With the wind we had all week, the conditions were just perfect to throw big baits.”

Rounding out the top 10 Pro Division finishers at the California Delta:

The next Stren Series event is a Central Division contest at Columbus Pool near Columbus, Miss., June 6-9.