Columbus Pool pros all under Sheets 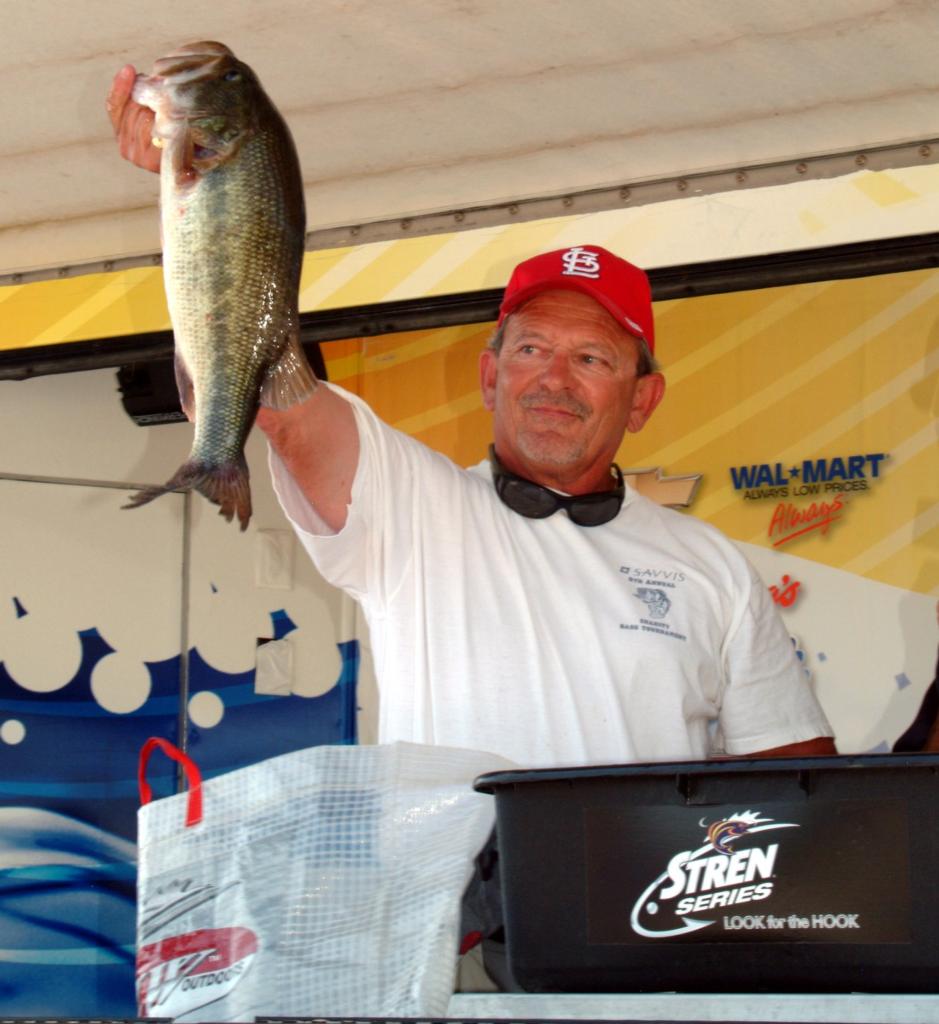 COLUMBUS, Miss. – Most of the pro weights in the top tier of the Stren Series Central Division event on the Columbus Pool came in as expected Wednesday: 10- to 12-pound sacks. But one professional should sleep well tonight, carrying a 1-pound, 11-ounce lead into tomorrow’s competition: Kenneth Sheets of Lake Saint Louis, Mo., hauled in an impressive five-bass limit weighing 16-14, including his division’s big bass.

Though there were obviously some exceptions, struggling for a quality bite was the rule of the day on the Tombigbee Waterway. Whether anglers locked through to the north – Aberdeen Pool – or south – Aliceville Pool – or stayed close by on Columbus, the vast majority reported a tough day of fishing. It could be because of hotter-than-average temperatures for this time of year (today’s high of 94 degrees is 11 degrees warmer than average), or it could just be the fickle nature of bass, but a whole slew of competitors reported their fish either being harder to catch or smaller than what they were reeling in during practice.

Though he wouldn’t divulge too many specifics about his technique this early in the tournament, Sheets said “it’s a unique deal” – combining a little luck with a little different strategy – that led to his success today.

“I found myself a little spot,” he said of his honeyhole in the pool to the north. “I’m flipping … but I’m doing something a little different, and it was working.”

But Sheets’ kicker fish came from the Columbus Pool, a happy accident involving a waiting game at the lock. He said he was waiting to lock through to the north but had to wait for a barge. In the mean time, 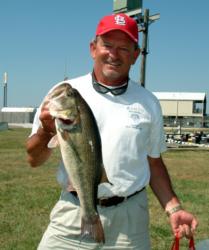 he decided to try to get a head start on the day nearby. In a matter of moments, he had lost a sizeable bass but followed it up immediately with his 6 1/2-pounder, which earned him the pro Snickers Big Bass award and $225 (official weight was 6 pounds due to a dead-fish penalty).

After locking through, he got to his spot by about 8:30 a.m. and proceeded to lose three in a row before landing a 5-plus-pounder and eventually a limit by 10 o’clock, all coming from 1 1/2 to 2 feet of water. Sheets said he “lost a limit today.”

“I was surprised not a lot of guys locked up there,” he said. “I was amazed nobody was on my spot.”

If nobody stumbles onto that spot and Sheets’ luck and technique holds out, he could remain the man to beat in this event. 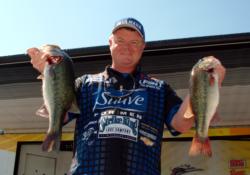 weighing 15-3, to commandeer the runner-up slot. Rose is currently ranked fifth in Central Division standings and is likely hungry to grab his first-ever FLW Outdoors win, especially after starting the season as the runner-up on Bull Shoals.

Rose reported catching all his fish by flipping tubes in Columbus Pool to bass in depths of anywhere from 2 to 8 feet. He had his limit by noon.

“I didn’t have much time for practice,” he said. “I just spent a few hours on each pool, and I had the best luck on Columbus.

“Today it was just here and there – scrap fishing. I’m just fishing hard; I’m not really keying in on any place in particular.”

Brown down for third

Nearly 3 pounds behind in third place is pro Gene Brown of nearby West Point, Miss. Brown sacked five bass for 12-5 and was paired with another local angler today, Bill Bowen of Caledonia, Miss., who outfished him by 3 1/2 pounds and handily leads the Co-angler Division. 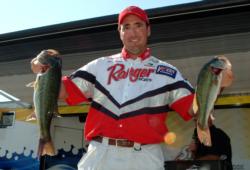 “It was tough,” Brown said of Wednesday’s action. “We didn’t have a morning bite.”

Eventually the pair bagged their limits with “a little bit of everything,” catching all of their fish shallow.

“We was all over the place: flipping, cranking, spinnerbaits,” Brown said of their day on Columbus Pool. “There wasn’t no pattern to it at all.

“We’d just go to wherever we had some confidence and start fishing.” 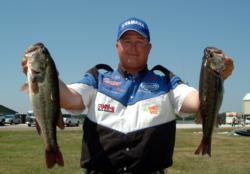 Yancy Windham of Gordo, Ala., caught a limit, weighing in at 12 pounds even, good for fourth place. Unlike many anglers, Windham said he is confident of his steady pattern.

“I feel like I could pull a limit each day,” he said.

Holding down the fifth-place position after day one is Rick Lisek of Springfield, Mo., who brought in a five-bass limit, weighing 11-14.

Rounding out the top 10 pros fishing the Stren Central at Columbus, Miss.:

Of 136 pros, only 51 five-bass limits crossed the scale today, and only six competitors failed to weigh a fish. 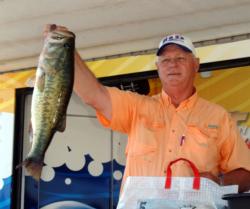 As reported earlier, local Bill Bowen took the Co-angler Division by storm, weighing in a five-bass limit at a staggering 15 pounds, 13 ounces. That weight would have had him solidly in second place on the pro side.

“Today I had a real slow start,” Bowen said. “It was tough to find fish due to extremely hot weather.”

Bowen said he found his best luck flipping a tube to grass in shallow water, which was what led to his kicker fish. The 7-7 monster not only was good enough to earn $119 as the Snickers Big Bass on the co-angler side, it was nearly a full pound larger than any single fish weighed in by the pros. 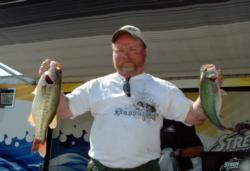 After the third-place point among co-anglers after day one, the weights dropped off dramatically, but two men were able to put together solid five-bass limits to stay in the hunt for a win.

Ron Abbott of Lafayette, Ind., put a few days of productive practice to good use, hauling in 12 pounds, 8 ounces from the Aberdeen Pool today for second place. He gave each of the three pools a day of practice, so he is prepared to fish anywhere his boaters may take him.

“I had my limit before 10 o’clock, throwing Senkos to wood,” Abbott said.

Danny Carter of Hernando, Miss., caught his 11-9 limit even earlier – by 9:30 a.m. – on the Columbus Pool. Though he said he couldn’t tempt the bass with a topwater bite, he was able to bring them in with 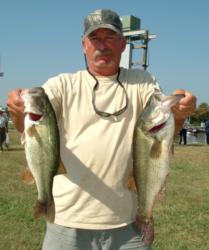 spinnerbaits and plastic worms from lay-downs and brush tops for third place.

Rounding out the top 10 co-anglers fishing the Stren Central event at Columbus, Miss.:

Of 136 co-anglers, only eight five-bass limits crossed the scale today, but only 32 competitors failed to weigh a fish.

Stren Central competition resumes Thursday when the anglers take off at 6 a.m. from the Columbus Marina, located at 295 Marina Drive in Columbus, Miss. Thursday’s weigh-in, marking the halfway point of the four-day event, will begin in the same location at 3 p.m.