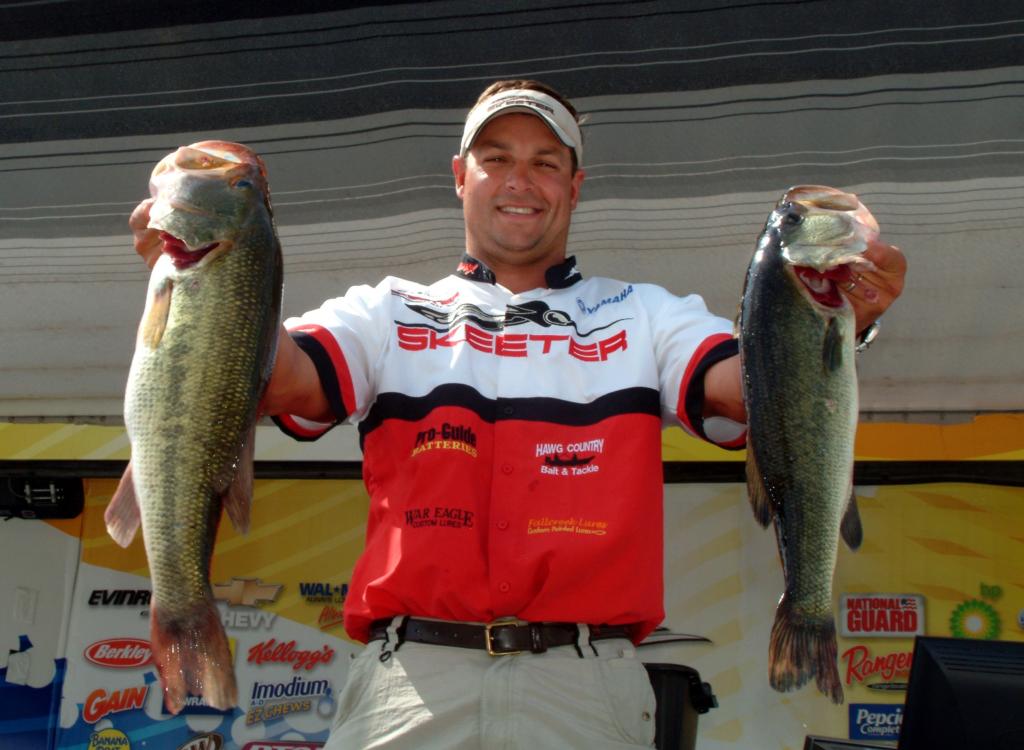 COLUMBUS, Miss. – It has been said by pros in the know this week that it takes at least a few big bites anchoring daily limits to win on the Columbus Pool. Clearly Greg Bohannan has taken note: The Rogers, Ark., pro weighed in the heaviest sack and bass of the tournament thus far Thursday to take a solid lead midway through the Stren Series Central event.

Today’s high temperature of 95 degrees broke a date record for Columbus, Miss., but the bite Bohannan found a lock below on Alabama’s Aliceville Pool was arguably just as hot.

“I went down there where I started yesterday … caught one little-bitty keeper, and we made a little bit of a move,” he said of finding a new hot spot south of Columbus Pool on the Tombigbee Waterway.

In addition to it being slightly warmer than forecasted Thursday, the sky was considerably cloudier than had been predicted earlier in the week. But Bohannan quickly discovered he wouldn’t need much sun to brighten his day and climb an astounding 21 places up the leaderboard.

“It was cloudy today, so we was just fast-rolling a bunch of baits, and the bass went for them,” he 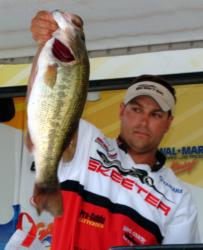 Included in that bevy of reaction baits was everything from spinnerbaits to a War Eagle buzzbait to crankbaits and beyond. Bohannan said most of the enticed bites came at a depth of approximately 5 feet.

One bass that “went for them” happened to be a 7-pound, 10-ounce giant that not only boosted Bohannan’s sack to a whopping 19-15 (the largest of this event so far), but also easily garnered the Snickers Big Bass award on the pro side, worth $225. Bohannan’s two-day weight now stands at 28-12, and he will carry a 3-pound, 8-ounce lead into Friday’s competition. Were it not for an 8-ounce dead-fish penalty, he would have vaulted the 20-pound barrier by nearly a half-pound.

Rose steady as she goes

Despite 11 top-10 finishes – including a runner-up finish apiece on the FLW Tour and in the Stren Series and BFL – along with over $440,000 in FLW Outdoors career earnings, pro Mark Rose of Marion, Ark., is still in the hunt for a win, and still in second place like yesterday.

Rose went “junk fishing” again today on the Columbus Pool to add another five-bass limit, weighing 10-1, to his 15-3 limit from Wednesday for a two-day total of 25 pounds, 4 ounces. 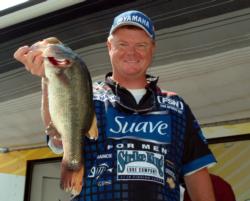 “My key area is getting kind of crowded,” he said. “Today I just got one good bite, compared to four yesterday.”

Rose said he was fishing basically “right here by the ramp” and “still flipping a tube,” black with red flakes, to lure bass into his boat. Like yesterday, he reported catching his fish in anywhere from 2 to 8 feet of water.

“I’m just scrapping and clawing,” he said of the hard-won bite he and many anglers are experiencing this week. “It’s too bad (weights are somewhat low) because this is a good fishery. It’s hot, and you’ve got some of the best anglers in the world out looking for them.”

Windham up a rung

Today Yancy Windham parlayed a five-bass limit that weighed 10 pounds, 14 ounces into a step up in the tournament standings from fourth to third. The pro from Gordo, Ala., sacked a 12-pound limit yesterday.

Yesterday Windham said he thought he could pull a limit each day – so far, so good – but Thursday he said 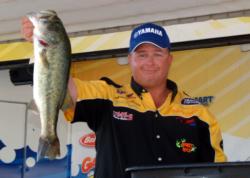 he had to work much harder for it.

“Tough. Tough. I mean, tough,” he said when asked about how his day went. “We’ve been all over. I caught about 25 keepers yesterday; today I only got six bites.”

Windham fished two pools – Columbus as well as Aberdeen to the north – to conjure those half-dozen bites, one of which he said was a 7-pounder that he lost. In addition to pitching and casting Venom plastics and a home-made jig to tempt his bass, he said he tossed around a Norman crankbait for part of the long day. Like Rose, Windham reported catching his five in 2 to 8 feet of water.

When asked about what made today so much more difficult for him, Windham had a few answers: “A lot of boat pressure. The water dropped. Cloud cover hurt my bite and moved my fish.”

Brown down to fourth

It was a mere 2 ounces that put Gene Brown of West Point, Miss., on the downside of a game of leapfrog with Windham. Today Brown added a limit worth 10-7 to his 12-5 limit from Wednesday for a 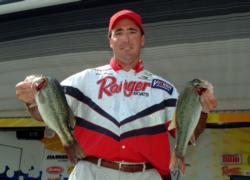 two-day total of 22 pounds, 12 ounces and fourth place. But Brown may have an ace or three up his sleeve to play Friday to ensure he makes the top-10 cut to fish Saturday’s finals.

“I’ve got three more holes I haven’t hit yet,” Brown said, adding another slice of good news in the form of “a good morning bite” Thursday that had eluded him yesterday.

Brown, who is essentially a local pro, said he will continue to fish the Columbus Pool, where he has caught all his bass “flipping jigs and plastics to wood and grass” in the shallows.

Benton, Kentucky’s Jeff Evans climbed a notch today to round out the top five pros. He added a limit of bass, weighing 10-15, to his three from Wednesday that weighed in at a surprisingly heavier 11 pounds, 3 ounces for a two-day total of 22-2.

But the glaring omission from today’s said top five was yesterday’s pro leader, Kenneth Sheets of Lake Saint Louis, Mo. He brought a light three-bass sack, 4-2, to the scale today, but still remains convincingly in the hunt, buoyed by his fat 16-14 limit from Wednesday. 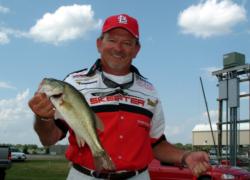 “The clouds killed me this morning, and I just didn’t execute; I had enough bites,” said Sheets, who is fishing up north in Aberdeen, where he had the place to himself Wednesday and only saw one other tourney boat nearby today. “But (the other boater) won’t hurt me … I can do it tomorrow, hopefully.”

Rounding out the top 10 pros fishing the Stren Central at Columbus, Miss.: 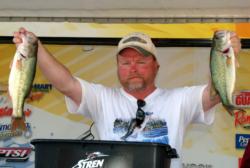 Ron Abbott of Lafayette, Ind., took over the top slot in the Co-angler Division on Thursday, adding a 7-pound, 10-ounce limit of bass to his 12-8 limit from yesterday for a two-day total of 20-2.

When asked how he managed a second limit from the back of the boat under such tough fishing conditions, Abbott succinctly replied, “Got’er figured out.”

That sentiment is not as surprising as it may seem, considering he put in the time and hard work on the front end of this four-day grinder. Abbott traveled from Indiana to Mississippi last Saturday and spent one day practicing on each of the three pools being fished. That sweat has built valuable equity for Abbott, who had to adjust to a different fishing strategy when paired with 29th-place pro Webb Collums today.

“He fished steep points – a little different than what I’m used to,” Abbott said, adding that Collums generously changed up patterns, partly for his benefit. “But then we hit some shallow stuff, and that’s when I caught my biggest one.”

The two fished Columbus Pool, and Abbott caught his fish near the launch site, primarily by “throwing some Senkos.” 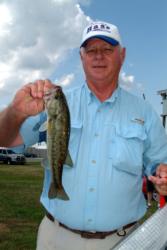 Local co-angler Bill Bowen of Caledonia, Miss., boggled many a mind yesterday when he captured the second-heaviest limit of the day, 15-13, including the pros. Today he sputtered up four bass for 3-12 (reduced by an 8-ounce dead-fish penalty), but still is close behind Abbott with a two-day total of 19-9.

“(We did) basically the same thing we did yesterday,” said Bowen, who has fished Columbus Pool both days and, in addition to cranking a little grass today, has primarily scored by pitching a Zoom lizard to grass.

The big difference has to do with a little local knowledge going a long way one day, only to be squelched the second.

“I couldn’t go to where I wanted today, like yesterday,” Bowen said.

Rules prohibit a co-angler from discussing with a subsequent pro where he fished with a prior one. But rules are rules for a reason, and Bowen had no complaints.

Mark Guin of Crossett, Ark., said he had the best experience he’s ever had in a tournament from the back of the boat today after being paired with John McGinnis of Clarkson, Ky. (currently in 15th on the pro side). McGinnis put him on fish in the Columbus Pool, where Guin sacked a 10-2 limit to add to his 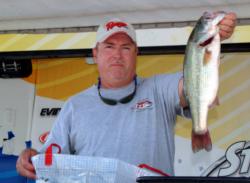 “I fished with a class act today … every time we got close to something good, he let me fish,” Guin said. “My hat’s off to him. He’s simply one of the best anglers I’ve ever fished with.”

Guin said McGinnis went so far as to skip over a fish to let Guin take a crack at it, adding, “That just never happens.”

Rounding out the top 10 co-anglers fishing the Stren Central event at Columbus, Miss.:

Of 136 co-anglers, only five weighed in five-bass limits today.

The co-angler Snickers Big Bass award, worth $119, went to Denver Henderson of Madison, Tenn., who currently sits in 74th place, solely because of his nice 4-1 catch. He hasn’t weighed in any other fish so far.

Stren Central competition resumes Friday when the anglers take off at 6 a.m. from the Columbus Marina, located at 295 Marina Drive in Columbus, Miss. Friday’s weigh-in will begin in the same location at 3 p.m., at which time the field will be cut to the top 10 anglers in each of the Pro and Co-angler divisions, who will fish a final day Saturday. The winner in each division will be determined by heaviest accumulated weight over all four days.