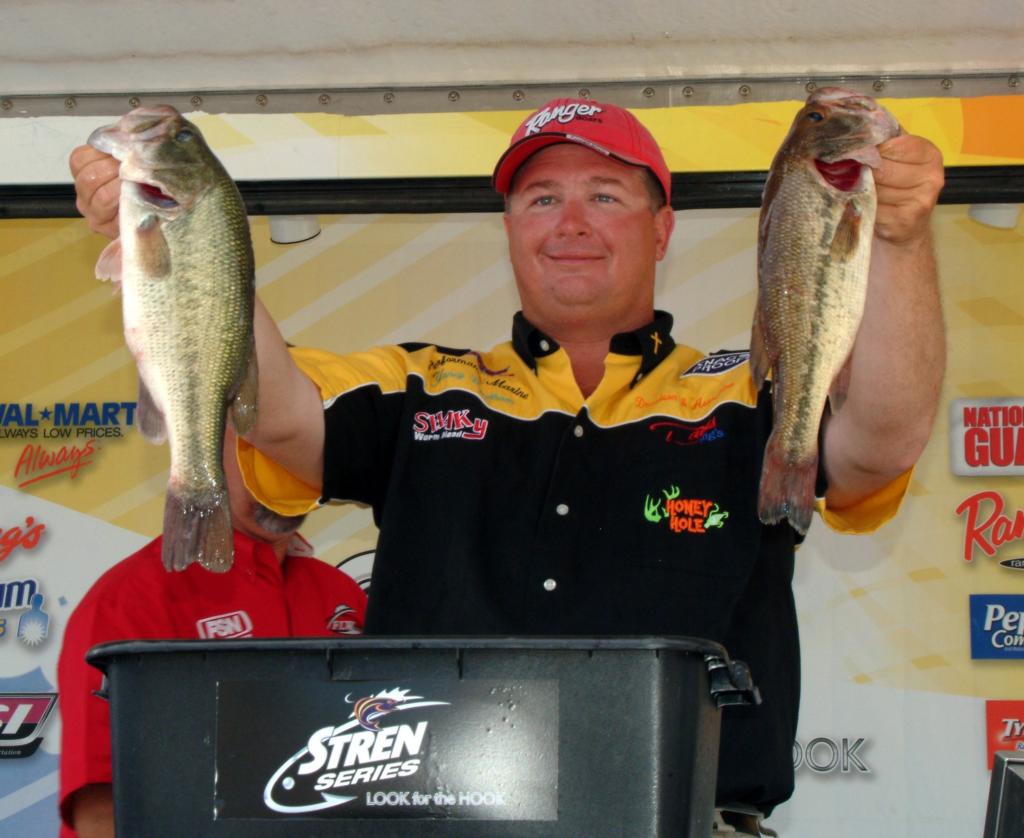 COLUMBUS, Miss. – Yancy Windham has been a model of consistency and hard work this week in the Stren Series Cental event on the Columbus Pool. On Friday that tenacity took him to the top of the pro leaderboard. Windham will carry a 1-pound, 2-ounce lead over his closest competition into Saturday’s finals.

“I worked my tail off today for those fish,” the pro from Gordo, Ala., said of his five-bass limit.

Consistency pays big dividends in a tournament with as tough a bite as what anglers have faced here this week. Windham sacked 12 pounds on day one, 10-14 on day two and 11-8 today for a total of 34 pounds, 6 ounces. The top-10 cut weight bottomed out at 28 pounds, 9 ounces.

“Everything keeps changing, especially with the clouds,” he said. “I’m having to hustle, trying to stay on something.”

This morning Stren competitors took off under heavily clouded skies, then experienced intermittent sun throughout the day before it finally clouded over again. Add to that another record-breaking day of high temperatures – topping out at better than 93 degrees in high humidity – and it was a rough day all around. Tomorrow’s forecast looks to be more consistently cloudy with chances of thunderstorms and showers throughout much of the day.

“With the clouds, the fish would get loose off their cover,” Windham said. “When the sun would come out, they’d tighten back up. It’s just a constant battle.”

Windham said he burned a tank of fuel chasing the bite today, fishing part of it to the north on the Aberdeen Pool and some of it nearby on the Columbus Pool. He caught a total of 10 keepers today in anywhere from 2 to 8 feet of water, mostly on Venom soft plastics and Bill Norman crankbaits plus a couple on a Davis spinnerbait. 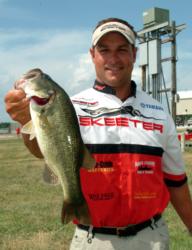 Yesterday’s leader, Greg Bohannan of Rogers, Ark., fell a slot to second place today, bringing only three bass to the scale for 4 pounds, 8 ounces. However, his 19-15 sack from day two plus his 8-13 from day one – both five-bass limits – give him a three-day total of 33-4.

“We had some real good blowups today, but just not enough bites,” Bohannan said, adding that cloudy conditions aid his pattern. “The clouds moved out on us today.

“If it rains tomorrow, it should help a bunch.”

Bohannan reported finding a hot spot on Aliceville Pool yesterday after locking to the south and then fishing fast with a variety of reaction baits to pull in the heaviest limit of the tourney so far. Cloud cover has been key to his success, so if the forecast holds, he could be deadly in the finals. 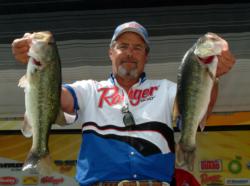 Jeff Evans of Benton, Ky., keeps chugging his way up the pro leaderboard, from sixth to fifth Thursday and another two slots to third today. He sacked another five-bass limit today for 11 pounds even, giving him a three-day total of 33-2.

Evans fished Aliceville Pool to the south on day one, but gave it up after finding a sweet spot closer to the launch site on Columbus Pool, allowing him more fishing time without having to lock through the dam.

Evans said he bagged his limit “pitching a shaky head” with a Zoom trick worm to about 5 feet of water. The Columbus Pool hideaway almost added a 5-pound kicker to his creel, but Evans said he lost it.

“I fished about a 100-yard stretch all day today,” he said, adding that he would return there tomorrow.

Pro Mark Rose of Marion, Ark., held down the runner-up spot over the first two days of competition, but lost a couple slots to wind up in fourth Friday. He added a lighter five-bass limit, weighing 7-3, to his 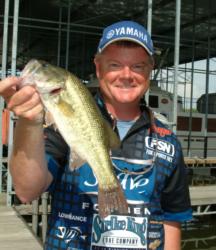 two earlier limits for a three-day total of 32 pounds, 7 ounces.

“I caught all my best ones on this one spot … it just didn’t work out as well for me today,” he said. “Somebody was sitting there, and that’s just tournament fishing.”

Rose remained true to his “flipping and pitching” to 2 to 8 feet of water on the Columbus Pool, which has gotten him this far, and he said he intends to do the same tomorrow. He’s been flipping tubes, a Zoom Trick Worm and, today, an even smaller worm plus a little crankbait.

“I’m just going to go out tomorrow, go for a quick limit, fish eight hours and head home,” said the longtime bass pro, who is registered to fish the Wal-Mart FLW Tour event on the Potomac River next week. “To be honest, my mind’s not even on this tour right now.”

But don’t count Rose out of the running here, where he is still in position to pick up his first FLW Outdoors win, because sometimes not feeling the pressure to make the grade can be an angler’s best friend. 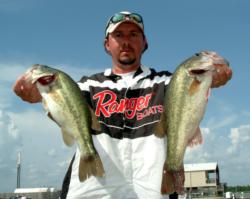 Webster fished on the Columbus Pool on day one and locked north to Aberdeen on day two. He returned to Columbus today, where he’s been saving a honeyhole, to bag his bass, catching seven keepers on a jig and a worm in about 5 to 6 feet of water. He’s keying on stumps.

“I sat in one hole all day … not that far from (the launch site),” he said, adding that tomorrow he’ll return to the hot spot and “hang out again all day.”

Rounding out the top 10 pros to make the cut, who will fish in Saturday’s Stren Central finals at Columbus, Miss.: 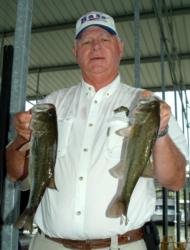 Bowen back on top of co-anglers

Local co-angler Bill Bowen of nearby Caledonia, Miss., was back on top of his division’s leaderboard Friday, adding three bass for 3-15 to his three-day total of 23-8. Bowen is fishing his first Stren Series event this week.

After fishing from the back of the boat the first two days on Columbus Pool, Bowen was up north on Aberdeen to start today, fishing with pro Shane Cole.

“We caught one keeper apiece up there,” Bowen said.

After locking back down to Columbus in the afternoon, Bowen said he picked up two more bass by flipping a Zoom lizard to the grass at about 2:45 p.m. 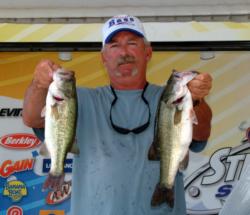 Danny Carter of Hernando, Miss., is in second place in the Co-angler Division. He caught four keepers today, weighing 7-11, to give him a three-day total of 22-8.

Ron Abbott of Lafayette, Ind., only managed one keeper today from the Aberdeen Pool to add 1 pound, 13 ounces to his three-day total of 21-15.

Steven McFarland of Mountain Home, Ark., is fishing his first season ever in the Stren Series, and what a season it has been for this co-angling phenomenon. 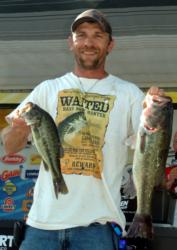 In the Stren Central Division, he’s currently the points leader in the Co-angler Division. He won his first-ever FLW Outdoors event in the Stren Central on Bull Shoals to kick off the season in February, scored another top-10 finish (8th) on Kentucky Lake last month and made the top-10 grade again today in fifth. And McFarland could still upgrade his finish here on the Columbus Pool depending on how things go in tomorrow’s finals.

No other Stren co-anglers have ever notched more than three consecutive top-10s, so this brand-new FLW Outdoors competitor has already joined the ranks of the giants from the back of the boat. McFarland could break the record if he top-10s on Lake of the Ozarks to round out the Stren Central season in September.

One thing is for certain: He will be one to watch at the Stren Championship in November and in future FLW Outdoors competition.

Rounding out the top 10 co-anglers to make the cut, who will fish in Saturday’s Stren Central finals at Columbus, Miss.: 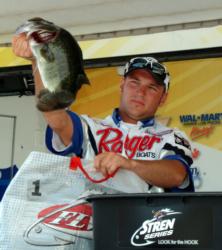 Of 136 co-anglers, six weighed in five-bass limits today, one more than yesterday.

The co-angler Snickers Big Bass award, worth $119, went to Brandon Hunter of Benton, Ky., for a nice 5-5 fish.

Stren Central competition resumes Saturday when the anglers take off at 6 a.m. from the Columbus Marina, located at 295 Marina Drive in Columbus, Miss. Saturday’s final weigh-in will be held at the Wal-Mart store located at 1913 Highway 45 N. in Columbus beginning at 4 p.m. The winner in each division will be determined by heaviest accumulated weight over all four days. Takeoffs and weigh-ins are free and open to the public.