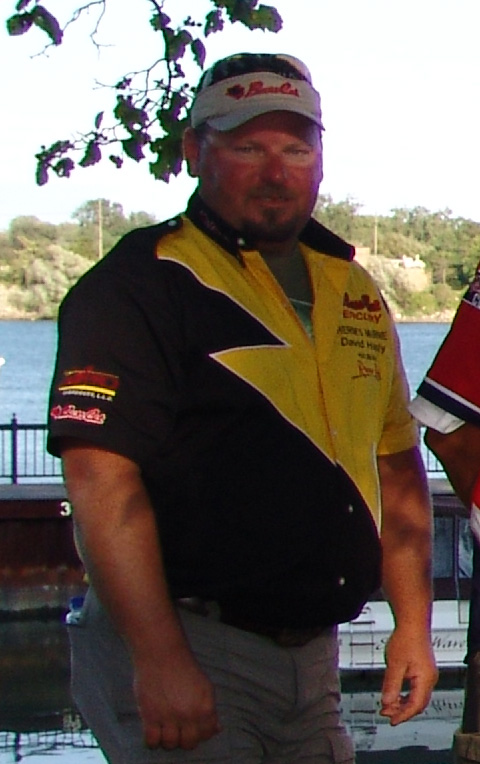 Toledo, Ohio, pro David Hasty raced to the top of the field with his biggest bag of the tournament. Angler: Dave Hasty.
August 17, 2007 • David A. Brown • Toyota Series

TRENTON, Mich. – Going into day three of the Stren Series event on the Detroit River, Toledo, Ohio, pro David Hasty held the fifth-place spot with 38 pounds, 5 ounces. Obviously, that wasn’t good enough for him because he raced to the top of the field with his biggest bag of the tournament.

Hasty’s 23-pound, 6-ounce catch gives him a three-day total of 61-11 going into Saturday’s top-10 finale. His third-day performance included a 6-pound, 3-ounce smallmouth that won Snickers Big Bass honors on the pro side. That fish ranks as the biggest weighed in three days by a pro and the tournament’s second largest.

With most of his competitors fishing either Lake St. Clair (north) or Lake Erie (south), Hasty caught his day-three fish at the north end of the Detroit River. Comfortable with his findings and pleased that he’s had little company, Hasty said he’ll return to the same pattern in the final round.

“I’m going to stay in the river situation because I’ve fished three different spots in three days, and I’m on one of my best spots,” he said. “Nobody’s there, but the fish are there. I’m just going to pick away at them and try to get the biggest bag possible.”

With a cold front pushing through the area on Thursday, Friday’s third round of competition saw clear skies, cooler air and windy conditions. Hasty said his river pattern is essentially weather-proof. “My fish are all deep – they’re in 20 to 35 feet, so the front didn’t affect them at all.”

Hasty caught his fish on drop-shot rigs fished over rocky bottom. Most of his bigger fish have come in the morning hours. “I’ve caught my quality fish early, and then I caught smaller fish throughout the day. I was done by 10:30 today.” 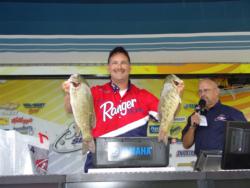 Campbell only 1 pound behind

Hailing from Mineral Springs, Pa., A.C. Campbell has been the event’s most consistent pro. He took the No. 2 spot on day one, moved up to first on day two and then dropped back to the second-place position on day three with a 20-pound, 8-ounce total bag that boosted his 3-day score to 60-12.

Campbell has stuck with the same area and pattern throughout the event – bouncing tubes and drop-shotting with Berkley Gulp gobies over drop-offs in Lake St. Clair. Targeting spots with rocks and weeds has been the key to Campbell’s success, and he’s confident that he can maintain enough consistency to seal the deal.

“I truly believe that there’s still a lot of good fish in that area, and I’ve been saving them,” he said. “(Two other competitors) and I have been fishing that area, and we made a pact that (each day) we’d get in there, get what we needed and get out. Tomorrow, it’s no holds barred. I’m going to pound it as hard as I can.”

Motor problems forced Campbell to end his day around 10:30. At that point, he was on a good bite, but he chose not to tempt fate and possibly miss the top-10 cut. “I think if I stayed out there another two hours, I could have picked up that one more quality bite that I needed, but I decided to play it safe and make sure that I could get in and make the top 10.” 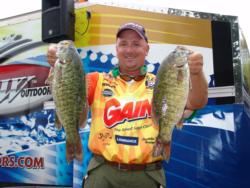 Rounding out the top 10 pro leaders at the Stren Series Detroit River event:

Finishing day one in fifth place, Point, Texas, co-angler Robert Case improved to second on day two and secured his top-10 qualification by taking over the lead on day three with an 18-pound, 7-ounce bag that gave him a total of 53-7.

Well versed at shallow water tactics for largemouth bass, Case finds himself leading the co-angler field in his first experience with smallmouths. The impression, he said, has been a good one. 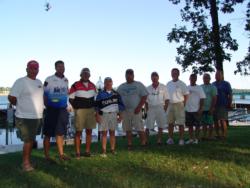 “I’ve caught fish on the drop-shot, and I caught some today on crankbaits,” Case said. “I’ve caught 30 keepers a day, so I’ve had a great three days.”

His final-round plan and prediction: “I’m going to throw a tube and a drop-shot all day. I think I’ll need about 19 pounds to win. It may take a little more than that, but 19 pounds is what I’m shooting for.”

Rounding out the top 10 co-angler leaders at the Stren Series Detroit River event:

The Stren Series on the Detroit River continues at Saturday’s takeoff, scheduled to take place at 6:30 a.m. EDT at Elizabeth Park Marina, located at 202 Grosse Isle Parkway in Trenton, Mich.